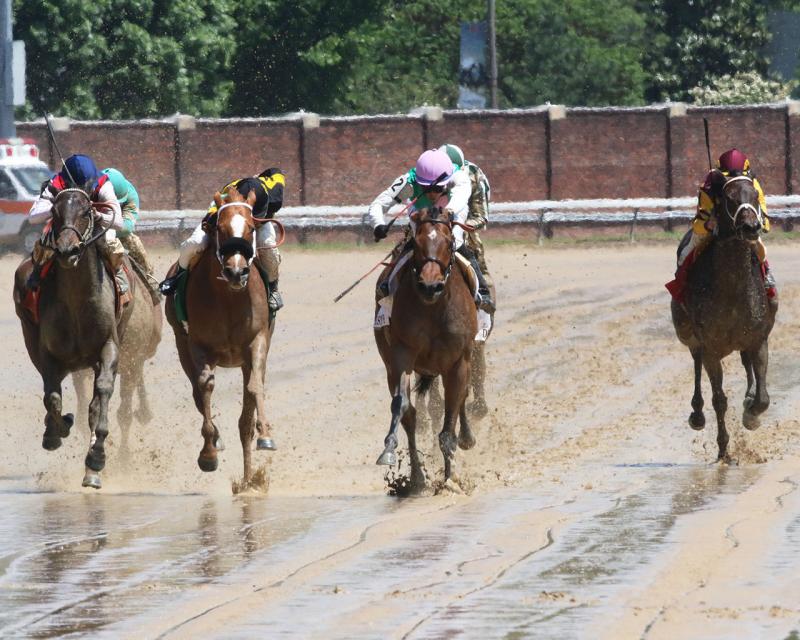 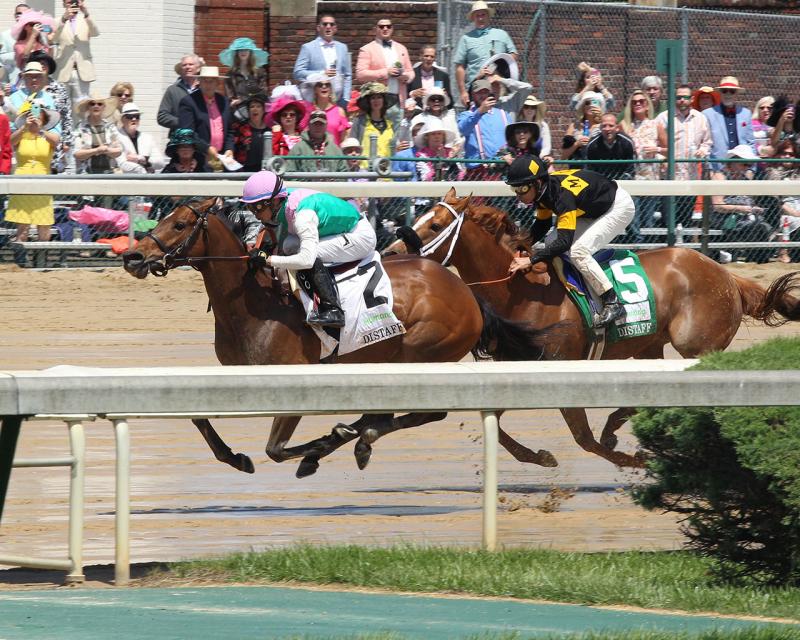 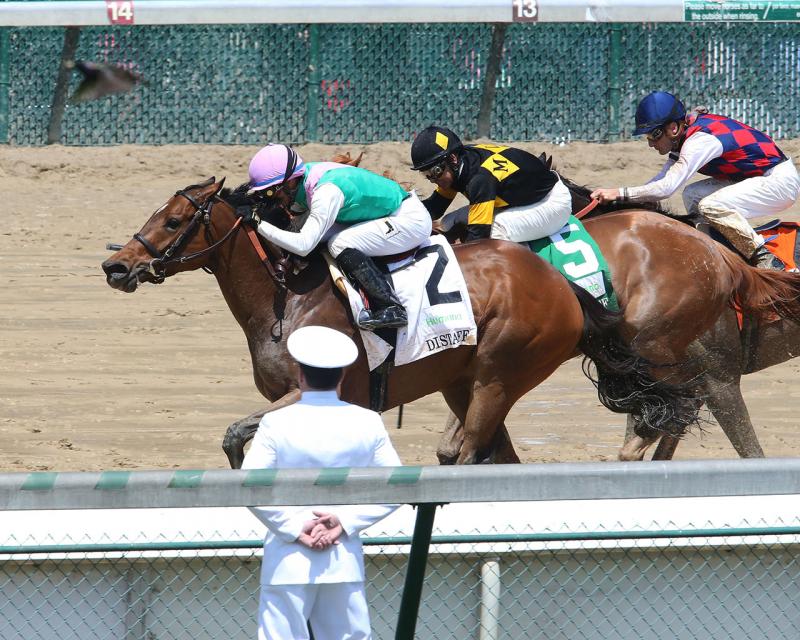 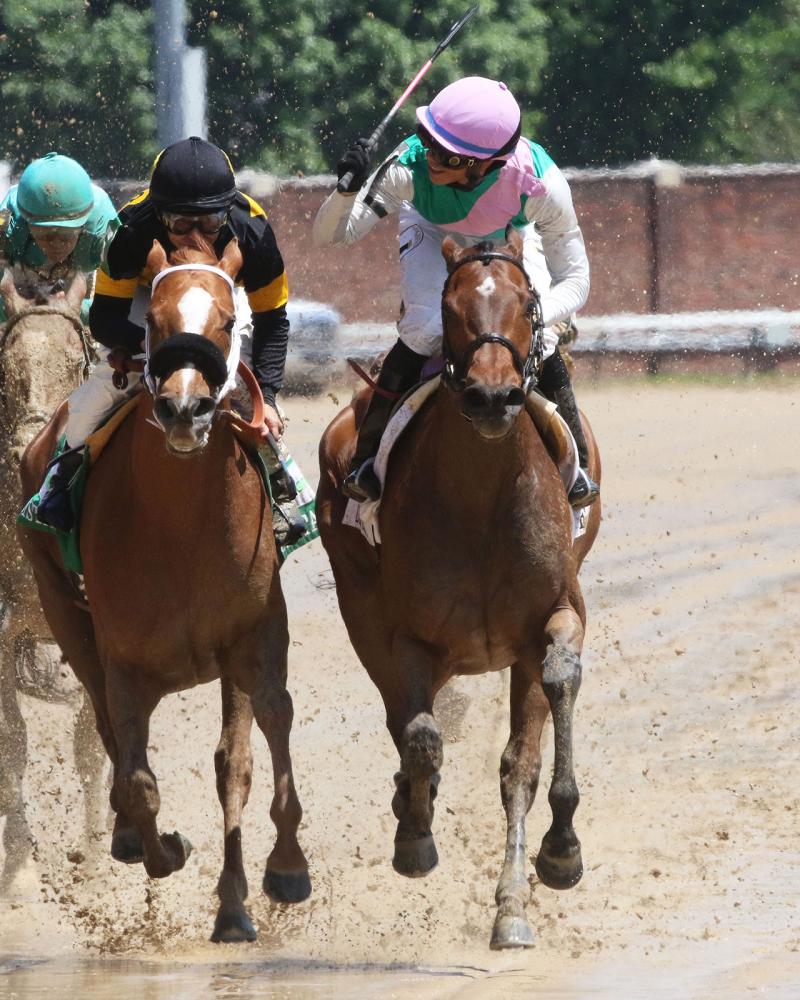 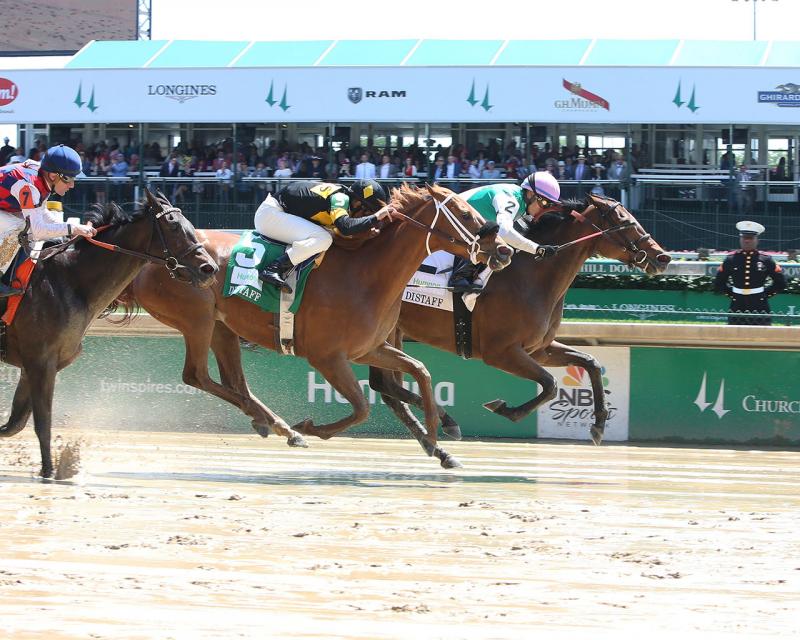 LOUISVILLE, Ky. (Saturday, May 6, 2017) – Juddmonte Farms’ Paulassilverlining moved past pacesetting Super Humor on the far turn and then held off a prolonged bid from Breeders’ Cup winner Finest City by a neck to win the 31st running of the $300,000 Humana Distaff (GI) for fillies and mares. The Humana Distaff was the first of seven graded stakes on Kentucky Derby Day.

Trained by Chad Brown and ridden by Jose Ortiz, Paulassilverlining covered the seven furlongs on a sloppy track in 1:23.68.

Paulassilverlining tracked Super Humor down the backstretch and moved toward the leader approaching the far turn with Finest City, winner of last year’s Breeders’ Cup Filly & Mare Sprint, and Carina Mia also on the move.

The trio hit the top of the stretch in that order with positions unchanged in the run to the wire. Paulassilverlining had finished third in the Breeders’ Cup, two lengths behind Finest City and Carina Mia had finished ninth as the favorite.

The victory was worth $182,280 to increase Paulassilverlining’s earnings to $1,371,230 with a record of 20-10-4-3. It was the second consecutive Grade I victory for the 5-year-old Kentucky-bred daughter of Ghostzapper who had taken the Madison at Keeneland four weeks ago.

Paulassilverlining paid her backers mutuels of $7.60, $3.40 and $2.60. Finest City, ridden by Mike Smith, returned $3 and $2.40 with Carina Mia finishing three-quarters of a length back in third under Julien Leparoux and returning $2.60 to show.

Sweetgrass finished another three lengths back in fourth and was followed in order by Lightstream, Mines and Magic and Super Humor.

Jose Ortiz (rider of Paulassilverlining, winner) – “No special instructions from Chad (trainer Chad Brown). He said, ‘You know this filly; ride her like you know how.’ She was extra game today but she's like that every time. She always shows up and gives her best. She showed up today.”

Chad Brown (trainer of Paulassilverlining, winner) – “She had no trouble with the track and Jose (Ortiz) gave her a great ride. He got her off the rail early, put her in a stalking position and got the jump on everybody.”

Mike Smith (rider of Finest City, runner-up) – “Great trip. She kind of slipped more than I’d hoped she would. We all have to run in it and some of them handle it better than others but that might have made a little bit of difference today. Every time I’d take two or three steps forward all of a sudden I was taking one back. She’d hit a little spot and then it’d be like starting all over again.”

Julien Leparoux (rider of Carina Mia, third-place finisher) – “She ran well. It was her first race back since Breeders’ Cup and those two fillies in front of her already had races this year. She ran a big race, we had a good trip and we were happy with it.”