Roddy Harrison’s Change of Control, the longest shot in the field at odds of 35-1, surged by favored Abyssinian in deep stretch to post a 1 ¾-length victory in the inaugural running of the $98,350 Mamzelle Overnight Stakes for 3-year-old fillies at Churchill Downs.

Trained by Michelle Lovell and ridden by Gabriel Saez, Change of Control covered the five furlongs on a firm Matt Winn Turf Course in :56.25. This was her first start on turf.

Raintree Starlet led the field of eight through fractions of :21.85 and :44.53 with Abyssinian in closest pursuit and Change of Control racing at the back of the pack. In mid-stretch, Abyssinian surged to the front and established a daylight advantage until Change of Control rallied on the outside and surged past in final yards.

The victory was worth $61,067 and increased Change of Control’s earnings to $99,787 with a record of 7-2-1-1. Change of Control is a daughter of Fed Biz out of the Quiet American mare America’s Blossom and was bred in Kentucky by John O’Meara.

It was another half-length back to Raintree Starlet, who was followed in order by Catherinethegreat, Morissette, Play On and Shesomajestic. Iva, Kim K, Chelsea Cloisters, Midnight Fantasy and Old and Costly were scratched.

Gabriel Saez, jockey of CHANGE OF CONTROL (winner): “It was a great effort by this horse and a great job of training by Michelle (Lovell). She broke well and I just tried to keep her in position around the turn. Once she got ahold of the ground she really responded well late and surged to the front.”

Michelle Lovell, trainer of CHANGE OF CONTROL (winner): “I’m so proud of (Change of Control). We broke well from the gate but I got a little worried when she dropped back in the field. Then, I could tell she really wasn’t getting a hold of the ground at first. Finally, around the turn, she really started to kick it into gear and I thought ‘We may have a shot here.’ Sure enough, she just exploded home. We’ve tried to get her on the turf in her last couple of starts but the rain kept washing them off. I think we found out she really likes the turf.”

Tyler Gaffalione, jockey of ABYSSINIAN (runner-up): “We ran a good race and the winner just closed from out of nowhere.” 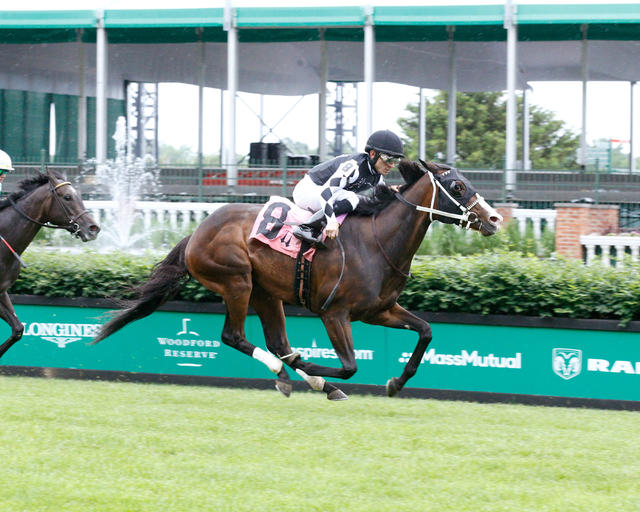