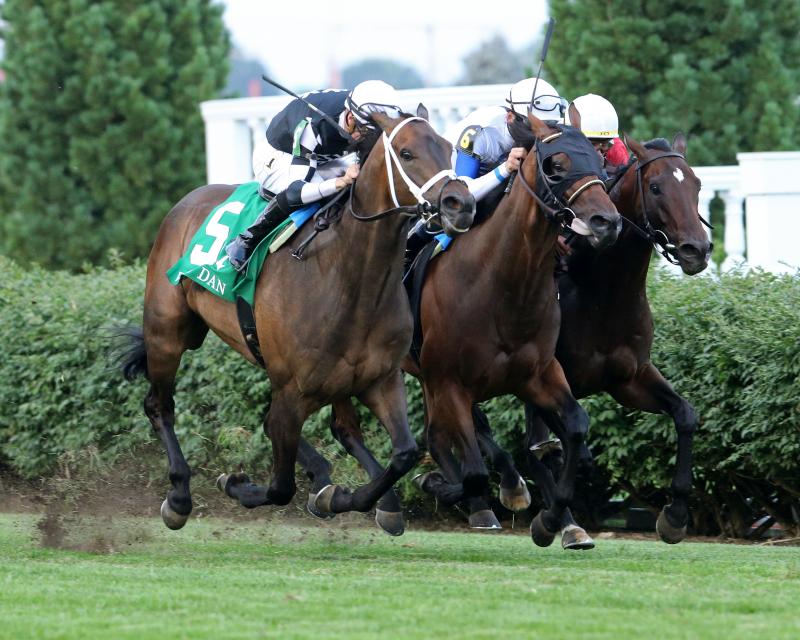 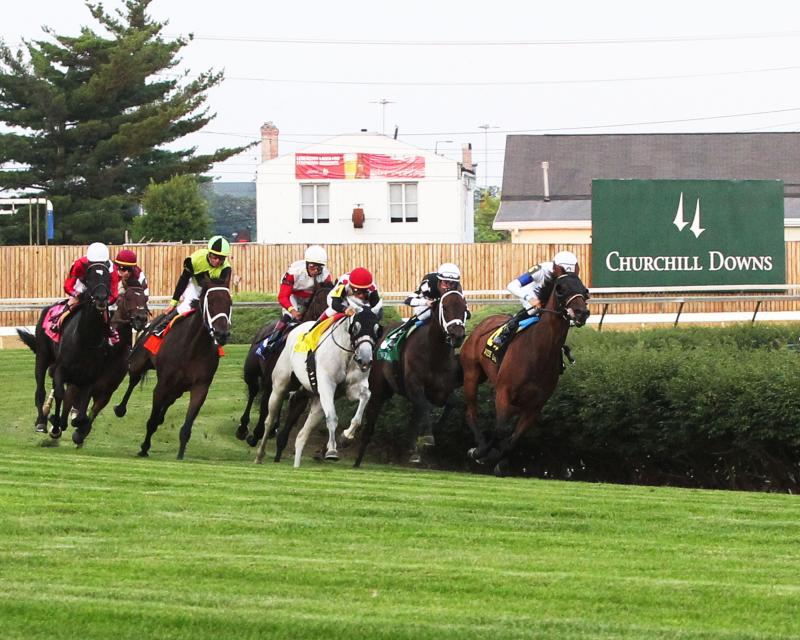 Staton Flurry’s Mr. Misunderstood (second from hedge, white cap) took aim on the pace-setting and moved away from reigning U.S. turf champion World Approval (red cap, third from hedge) on the far turn on his way to a win in Saturday's 29th running of the $200,000 Wise Dan (Grade II). (Coady Photography/Churchill Downs) 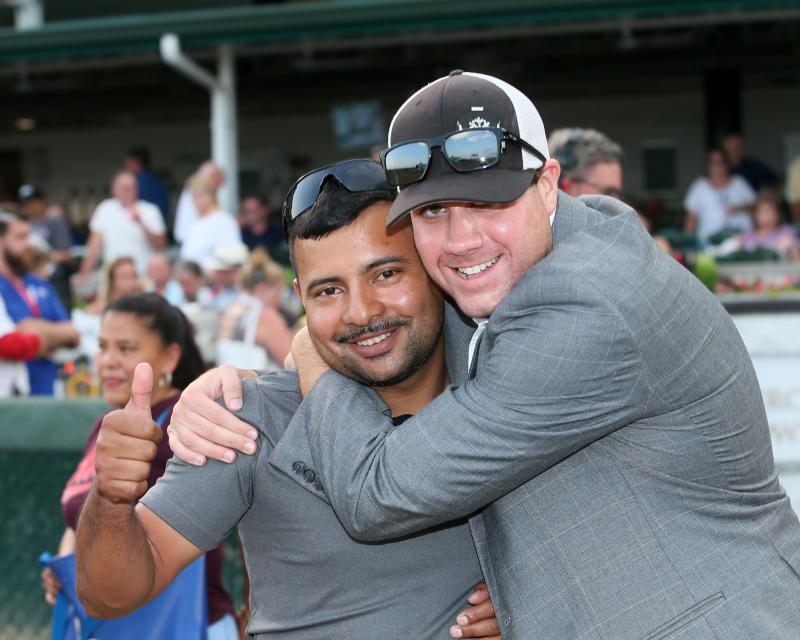 Staton Flurry’s 4-year-old gelding Mr. Misunderstood remained perfect in three starts on the Churchill Downs turf course when he surged past Mr Cub in the final yards to beat a closing Inspector Lynley by a half-length in Saturday night’s 29th running of the $200,000 Wise Dan (Grade II). Mr Cub was another head back in third and 2017 Eclipse Award Champion Turf Male World Approval finished sixth as the 6-5 favorite after being bumped and squeezed at the start.

Ridden by Florent Geroux and trained by Brad Cox, Mr. Misunderstood ran 1 1/16 miles over firm turf in 1:41.83 to collect his sixth stakes win and first against Grade II company.

Mr Cub, ridden by Chris Landeros, set the pace through fractions of :24.70, :48.75 and 1:12.73 as Mr. Misunderstood overcame a hard bump at the start and settled in a tracking position in fourth. Mr. Misunderstood angled off the rail on the far turn and rallied in the stretch to edge past Mr Cub three wide in the final stages.

Mr. Misunderstood, a son of Archarcharch out of the Afternoon Deelites mare Jodys Deelite, was bred in Kentucky by Athens Woods.

FLORENT GEROUX, jockey of MR. MISUNDERSTOOD (winner): “This horse isn’t the biggest horse in the world but does very well covered up behind some of the other bigger ones in front of him. When I tipped him out he really dug in. He didn’t run bad in his last start (the Maker’s 46 Mile at Keeneland) but we knew he was better than that. He proved today he’s right up there with some of the best turf horses in the country.”

BRAD COX, trainer of MR. MISUNDERSTOOD (winner): “I think we may have rushed him a bit getting back from the Maker’s 46 at Keeneland. He ran well but I think the three weeks between races was a bit too much, especially running in a Grade I. We gave him a bit more time off and pointed for the Wise Dan and he proved he could compete with some of the top horses on the grass.”

STATON FLURRY, owner of MR. MISUNDERSTOOD (winner): “Brad and his team have done such a phenomenal job with this horse. I was up here two weeks ago when he breezed over the grass and looked phenomenal. I said after the Maker’s 46 we needed to get a little bit luckier in the Grade I and Grade IIs and that happened tonight.”

CHRIS LANDEROS, jockey of MR CUB (third): “He ran such a big race on the front end. I’m so proud of his effort. He was just a few strides away from winning. He ran a great race.”

IAN WILKES, trainer of MR CUB (third): “He ran such a great race. We almost had it. He simply ran too good to lose.”

MARK CASSE, trainer of WORLD APPROVAL (sixth as the favorite): “I guess the track’s a little loose. He (jockey John Velazquez) said that every time he’d start to accelerate he’d kind of lose his footing. He said he’s never done that before, so I don’t know. Johnny did a good job. We got roughed-up a little bit at the start, but he got him out of there and got him in good position.”

Q: Is he the same horse?: “Well, he trains and looks as good, but so far his last two performances haven’t looked it, so I don’t know. It’s our job to figure that out.”

Q: Again, could you talk about World Approval’s issues at the start? “Johnny knows him better than anybody, and he said he’s never struggled with a turf course like he struggled tonight. He said that every time he’d run about three or four strides, they call it ‘pitchin,’ and he said that’s what he kept doing. I don’t know, because he handles all kinds of turf.”

JOHN VELAZQUEZ, jockey on WORLD APPROVAL (sixth as the favorite): “He just didn’t run his race at all. I was just telling Mark (trainer Mark Casse) it feels like the grass is very loose. He’s run in the soft and he’s run on the firm turf, but this just feels like it’s just coming up underneath of him and he’s not really getting a grip of it. And then he just didn’t run.” 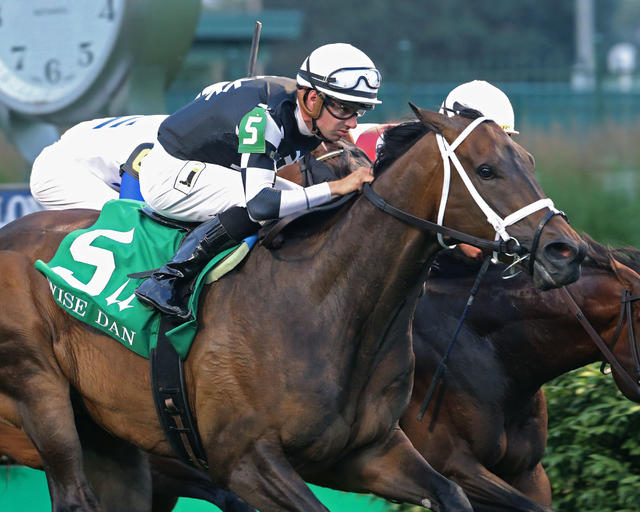