Sather Family’s homebred Mylady Curlin rallied from just off the pace to win the 104th running of the $300,000 Falls City (Grade II) for fillies and mares on Thanksgiving Day at Churchill Downs.

Mylady Curlin, trained by Louisville-native Brad Cox and ridden by Tyler Gaffalione, ran 1 1/8 miles over a fast track in 1:50.11.

“The extra distance seemed to be the key this afternoon,” Cox said. “Both of our horses ran great today. Moonlit Garden was solid finishing third and we’re very proud of both of them.

“She was a really fun ride this afternoon,” Gaffalione said. “She was sitting in a perfect spot the entire race and was cruising comfortably the entire time.”

Breaking from post position No. 2 in the field of 11, Kallio was rated in eighth from the inside down the backstretch as Limari carved out a clear early lead through fractions of :24.58, :50.02 and 1:15.67. Starship Jubilee, the winner of the Grade I E.P. Taylor at Woodbine in her previous start, commenced her run with a four-wide move around the final turn, and Kallio, who swung to the outside, followed her every step of the way. The favorite took the lead at the top of the stretch but it was short-lived as Kallio relished the soft turf and collared Starship Jubilee just inside the final furlong to draw clear late.

Kallio is a daughter of the late stallion Scat Daddy out of the Dynaformer mare Smokey Diplomacy.

Tyler Gaffalione, jockey of MYLADY CURLIN (winner): “She was a really fun ride this afternoon. She was sitting in a perfect spot the entire race and was cruising comfortably the entire time. She seemed to really handle the distance well and responded very well when I asked her for her best run.”

Brad Cox, trainer of MYLADY CURLIN (winner), MOONLIT GARDEN (third): “Being from Louisville it’s really fun winning a race like this on Thanksgiving. The extra distance seemed to be the key this afternoon. Both of our horses ran great today. Moonlit Garden was solid finishing third and we’re very proud of both of them.”

Brian Hernandez Jr., jockey of GO GOOGLE YOURSELF (winner): “We sat a great trip and thought we were gone turning for home. She ran a great race against a nice field of horses.”

Tyler Gaffalione, jockey of KALLIO (winner): “She’s seemed to run everywhere this year and keeps performing well. I think she’s continuing to improve with age and she really stayed into the bit today. We were cruising in the stretch.”

Brendan Walsh, trainer of KALLIO (winner): “She’s a bit of a difficult filly. She’s sometimes not always there mentally but when she puts things together she runs very well. She had a good setup today and seemed to have really relished the ground. She’s getting better with age.”

Luis Contreras, jockey of STARSHIP JUBILEE (runner-up): “She didn’t really handle the ground well today. I thought she was in the right spot but never got a hold of the turf. It’s pretty soft out there.”

Declan Cannon, jockey of ENGLISH SOUL (third): “She ran a beautiful effort today. She loved the soft going and really handled the surface well. It was just a really nice effort overall to get third.” 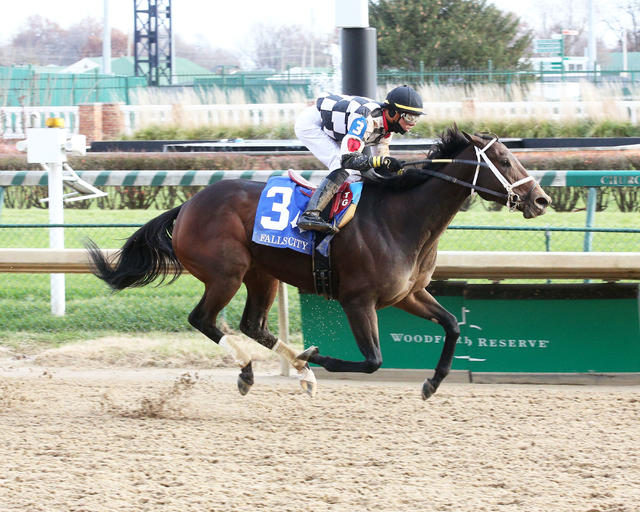