Rigney Racing’s Played Hard , winner of the $400,000 Locust Grove (Grade III), will headline a field of six fillies and mares that were entered in Thanksgiving Day’s 107th running of the $500,000 Falls City (GIII) at Churchill Downs.

Trained by Phil Bauer, Played Hard drew off to a 5 ¾-length victory in the Sept. 17 Locust Grove. In her next start, the improving 4-year-old daughter of Into Mischief finished third to eventual Breeders’ Cup Distaff (GI) winner Malathaat in the $600,000 Spinster (GI). Overall, Played Hard sports a record of 13-4-5-2 and has banked $672,870 in purse earnings. The versatile filly has yet to finish off the board in her 2022 campaign with three wins, one second and one third-place effort. Played Hard will be ridden in the Locust Grove by Joel Rosario from post No. 4.

Chief among her competition that entered the Locust Grove is S.M.D. Ltd.’s multiple stakes-winning Pennsylvania-bred filly Leader of the Band. Trained by John Servis and ridden by Luis Saez, Leader of the Band was victorious as a 3-year-old in the $259,000 Monmouth Oaks (GIII). Along with her Monmouth Oaks score, Leader of the Band’s résumé includes wins in the $135,000 Summer Colony at Saratoga and $102,000 Lady’s Secret at Monmouth. In her last start, the 4-year-old filly finished second as the heavy 2-5 favorite to Love in the Air in the $200,000 Plum Pretty at Parx. Leader of the Band drew the rail in the Falls City.

The Falls City was first run in 1875 and was restricted to 3-year-olds. Camargo won the first running, which was a match race worth a purse of $1,125. The favorites have only won the Falls City twice in the last 10 years: Mylady Curlin (2019) and Afleeting Lady (2012).

Fans can watch and wager on the Fall City and every race from Churchill Downs on www.twinspires.com, the official wagering provider of Churchill Downs Incorporated and the Kentucky Derby.

GRADE I WINNER DALIKA (GER) TOPS FIELD OF 10 ENTERED IN GRADE III, $300,000 CARDINAL – Bal Mar Equine’s $500,000 Beverly D. (Grade I) winner Dalika will return to Churchill Downs and headline a contentious field of 10 fillies and mares that were entered in the $300,000 Cardinal Stakes (GIII) on Thanksgiving Day at Churchill Downs.

Trained by Al Stall Jr., Dalika was the half-length victor in the Aug. 13 Beverly D., which was contested for the first time at Churchill Downs. The striking gray 5-year-old mare primarily trains at the Skylight Training Center, located about 40 minutes from Churchill Downs in Goshen, Ky. Overall, Dalika has won nine of her 30 starts and tabbed $1,292,786 in purse earnings. Jockey Brian Hernandez Jr. will be in the saddle for the Cardinal and break from post No. 5.

AROUND THE BACKSTRETCH – Frigid temperatures remained in the Louisville area Saturday and many trainers only sent their horses to the track to jog. There were only 11 published workouts compared to 93 last Saturday. Among the horses that braved the weather was Silverton Hill’s Pass the Plate, who breezed an easy half-mile in :50.20. … Trainer Michael McCarthy is going to keep a string of horses in Kentucky this winter to run at Turfway Park. His horses will be based at Trackside Louisville with his local assistant Justin Curran. … Breeders’ Cup Dirt Mile (GI) runner-up Cyberknife returned to trainer Brad Cox’s care at Churchill Downs following stallion showings at Spendthrift Farm. Cyberknife is expected to target the $3 million Pegasus World Cup Invitational (GI) on Jan. 28 at Gulfstream Park.

DOWN THE STRETCH – The 20-cent Derby City 6 had a three-day carryover of $12,374 into racing Saturday. First post was 1 p.m. and the Derby City 6 spanned Races 6-11. … Pool 2 of the Kentucky Derby Future Wager along with the lone pool of the Kentucky Derby Sire Future Wager will run Nov. 24-27. The 40 betting interests for each pool will be released Monday. … For more information on the Churchill Downs Fall Meet, visit www.churchilldowns.com. 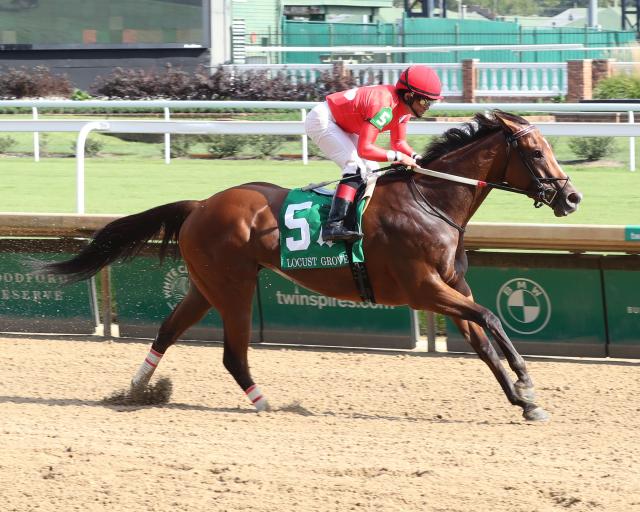