Veteran trainer Wayne Catalano exuded passion and animation when he described Susan Moulton’s three-time winner Manny Wah as the now 4-year-old colt will get his chance to breakthrough in stakes competition in Saturday’s $100,000 Aristides presented by Woodford Reserve (Listed).

“I think he deserves a shot against these horses,” said Catalano, who scratched Manny Wah from an allowance event last Thursday in favor of Saturday’s race. “He’s been right there knocking on the door against some really nice horses as a 3-year-old and this year down at Oaklawn. He ran third behind two quality horses, Whitmore and Flagstaff (in the Grade III Count Fleet). They’re not in this field but it showed (Manny Wah) can run right with those type of horses.”

Manny Wah drew the inside post in the compact field of six sprinters on Saturday’s six-furlong race. In 14 of Manny Wah’s 17-career starts, Catalano’s son-in-law Channing Hill was in the irons. However, Hill was sidelined in mid-April due to a compression fracture in his lower back. Corey Lanerie will have the mount for Saturday’s Aristides.

“Channing is doing well. He’s at home and healing up,” Catalano said.

Manny Wah was installed at 8-1 on the morning line for the Aristides as he’ll face 9-5 favorite Bobby’s Wicked One, the winner of the $250,000 Commonwealth (GIII) at Keeneland, and up-and-coming sprinter Volatile (2-1).

“It’s a solid match up on Saturday,” Catalano continued. “There are a lot of nice horses in this field. There were many nice horses in last week’s (allowance) race, too. You won’t find an easy spot.”

The veteran Catalano was born in New Orleans and began his career as a jockey in 1974. Throughout his 10-year career in the saddle, he recorded 1,792 victories before retiring due to chronic knee injuries.

“I still remember my first win and it was beneath those historic Twin Spires,” said an exuberant Catalano. “It was on May 20, 1974 on a horse named Hellfire. That’s where it all started.”

Upon his retirement from riding, Catalano quickly found success training. Arguably one of Catalano’s most accomplished horses was 2006 Breeders Cup Juvenile Fillies (GI) winner Dreaming of Anna. The 17-time winner died in 2018 and her last foal is in the care of Catalano at Churchill Downs: a 2-year-old colt by Declaration of War named Big Dreaming.

The Aristides is carded as Race 8 of 11 with a post time of 4:46 p.m. Saturday’s program at Churchill Downs also will feature the $100,000 Dogwood presented by Woodford Reserve (Grade III), which is a prep race on the Road to the Longines Kentucky Oaks. First post is 1 p.m.

The early National Weather Service forecast for Saturday in Louisville calls for mostly sunny skies with a high near 89 degrees and a 30 percent chance of showers and thunderstorms, mainly after 2 p.m.

The seven-furlong Dogwood, carded as Race 10 of 11 at 5:50 p.m. on Saturday, is a designated prep race on the Road to the Longines Kentucky Oaks and will award the Top 4 finishers 20-8-4-2 points. The co-featured event on the card is the $100,000 Aristides presented by Woodford Reserve (Listed), which goes as Race 8. First post is 1 p.m. (all times Eastern).

Four Graces, a daughter of Majesticperfection, debuted as a 7-1 winner at Gulfstream Park in March. The half-sister to multiple graded stakes winner McCraken finished fourth in her second start at Gulfstream but quickly rebounded with an emphatic 1 ¾-length score on May 16 at Churchill Downs under Julien Leparoux.

CHURCHILL DOWNS PARTNERS WITH NYRA FOR CROSS COUNTRY PICK 5 ON SATURDAY – Churchill Downs, in conjunction with the New York Racing Association, will feature a cross-country Pick 5 on Saturday with three races from Belmont Park and two from Churchill.

The 50-cent bet, with a low 15 percent takeout, will be hosted by NYRA and feature the following races:

The kickoff leg of the bet is the $100,000 Westchester for 4-year-olds and up at 1 1/16 miles. The race features multiple Grade I winner Code of Honor who is set for his 4-year-old debut following a disappointing seventh-place effort in the Breeders’ Cup Classic (GI).

Race 8 at Belmont is the $100,000 Intercontinental (GIII) for fillies and mares 4-year-olds and up at seven furlongs on the turf. The field of 12 features a quartet of Chad Brown-trained horses led by multiple graded stakes winner Newspaperofrecord.

The ninth race at Churchill Downs is a wide-open first-level allowance event sprinting 5 ½ furlongs on the Matt Winn Turf Course. The race drew a field of 10 horses in the body and four also eligible entrants topped by 7-2 morning line favorite High Crime.

The final leg of the wager is the 44th running of the $100,000 Dogwood (GIII). The seven-furlong event features a competitive field of eight fillies led by recent allowance winner Four Graces.

Wagering will be available on ADWs across the country including www.TwinSpires.com. Free Brisnet past performances are available for Churchill Downs races at www.churchilldowns.com/handicapping.

TV SCHEDULE THIS WEEK – The racing action from Churchill Downs Racetrack throughout the 2020 Spring Meet will be broadcast on FOX Sports’ “America’s Day at the Races,” which will air every race day on either FS1 or FS2. 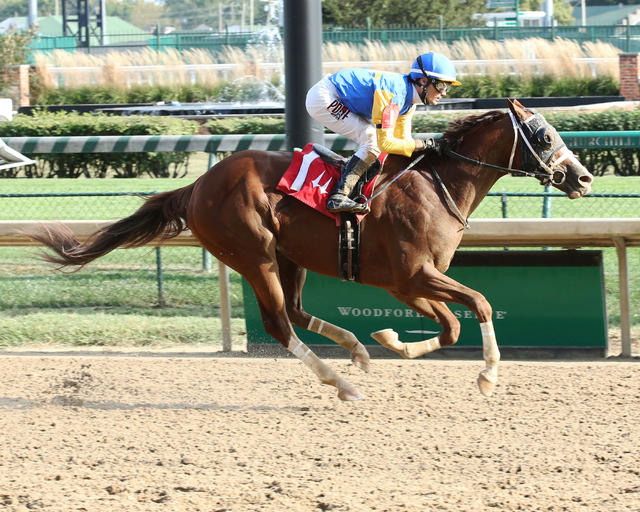