Multiple Grade I-winning sprinter Spiced Perfection has been privately purchased and transferred from trainer Peter Miller to Mark Casse. The 5-year-old mare will now target the $100,000 Winning Colors (Grade III) at Churchill Downs on May 31, according to Casse.

“She was privately purchased by Haruya Yoshida over the winter and she’s been a great addition to our barn,” Casse said. “I think we’re going to be on target for the Winning Colors and get her 5-year-old campaign going at Churchill.”

Spiced Perfection recorded a bullet half-mile move in :47 Sunday morning at Churchill Downs in preparation for the six-furlong race. The California-bred filly by Smiling Tiger worked in an opening quarter-mile split of :22.60 and galloped out five furlongs in 1:02.

Under her previous ownership of Pantofel Stable, Wachtel Stable and Peter Deutsch and the care of Miller, Spiced Perfection earned a stout $1.2 million in purses with Grade I wins in the $300,000 La Brea and $300,000 Madison. She also scored a narrow victory in the $250,000 Thoroughbred Club of America (GII).

Nominations for the Winning Colors along with the $100,000 Old Forester Mint Julep (GIII) closed Saturday. The full list of nominations will be available at www.churchilldowns.com in the coming days.

The action began early Saturday morning with Bill and Corrine Heiligbrodt, Heider Family Stables and Madaket Stables’ $500,000 Churchill Downs Distaff (GI) winner Mia Mischief recording a five-furlong move in 1:00.60 under jockey Ricardo Santana Jr. Mia Mischief is a perfect 2-for-2 to start her 5-year-old season with a recent win in the $125,000 Carousel at Oaklawn.

Haruya Yoshida’s multiple Grade I winner Spiced Perfection clipped through a half-mile move in :47, the fastest of 134 horses at the distance. Meanwhile, Peter Brant’s Dunbar Road worked for the first time beneath the Twin Spires tabbing a half-mile breeze in :48. A winner of the $600,000 Alabama (GI) at Saratoga as a 3-year-old, Dunbar Road will make her first start of the year in Saturday’s $100,000 Shawnee.

There was no turf training Sunday morning due to inclement weather throughout the morning on Saturday. Turf training is scheduled for Tuesday, weather permitting.

ELEVEN JOCKEYS, 10 TRAINERS RECORD VICTORIES ON SATURDAY’S OPENER – The competitive nature of the Churchill Downs jockey and trainer colonies was on display Saturday when 11 different jockeys and 10 different trainers recorded victories on the 11-race program.

Trainer Cherie DeVaux was the only person to record multiple wins on the card with victories in Races 8 and 11 with Dinar and Reagan’s Edge, respectively. Other trainers recording wins were Bill Mott, Brad Cox, Ian Wilkes, Eddie Kenneally, Robertino Diodoro, Bernie Flint, Keith Desormeaux, Larry Rivelli and Charles Zehnder, who recorded his first win beneath the Twin Spires in Race 6.

CHURCHILL DOWNS TO OFFER FREE BRISNET PAST PERFORMANCES THE ENITRETY OF THE SPRING MEET – Churchill Downs will offer handicappers free Brisnet past performances throughout the Spring Meet.

Horseplayers can visit www.churchilldowns.com/racing-handicapping/handicapping/expert-picks for complementary Brisnet past performances along with daily expert selections from Ed DeRosa, Joe Kristufek and Scott Shapiro of TwinSpires.com and several other handicapping tips including workouts of the day from expert clocker Bruno DeJulio.

CHURCHILL DOWNS RACING TO AIR ON ‘AMERICA’S DAY AT THE RACES’ ON FS1, FS2 EVERY RACE DAY – The racing action from Churchill Downs Racetrack throughout the 2020 Spring Meet will be broadcast on FOX Sports’ “America’s Day at the Races,” which will air every race day on either FS1 or FS2.

Here are the early probable entrants, according to Churchill Downs’ assistant racing secretary and stakes coordinator Dan Bork (with trainers):

DOWN THE STRETCH – Trainer Brad Cox reported champion Monomoy Girl exited her victory Saturday afternoon in good shape. Cox said he would search for a two-turn race for her next start. … Janis Whitham’s potential future star filly Four Graces, who caught the eye of many with her fast-closing 1 ¾-length score Saturday, was doing well Sunday morning, according to trainer Ian Wilkes. “She’s a really nice filly. We’re not sure where she’ll end up next,” Wilkes said. … There is a $6,995 carryover in the 20-cent Single 6 Jackpot on Sunday. First post is 1 p.m. and the Single 6 kicks off in Race 6 with a post time of 3:36 p.m. … Racing will continue Thursday with a four-day week with a daily first post of 1 p.m. 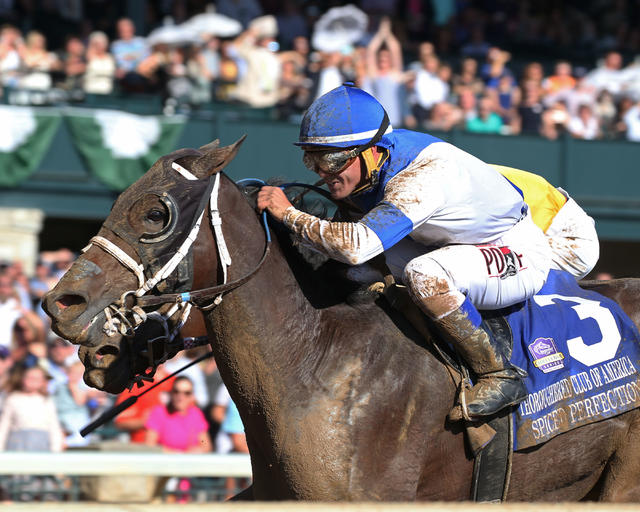