“I have just been thinking all along to go one race at a time with this colt,” Walsh said. “We’ll talk it over with the Godolphin team and plan for our next target whatever that may be.”

Maxfield moved to a perfect 3-for-3 in his young career with Saturday’s one-length victory in the Matt Winn. Under jockey Jose Ortiz, Maxfield closed strongly down the center of the track to overtake Ny Traffic in the closing stages of the 1 1/16-mile race. With his win on Saturday, Maxfield garnered 50 points on the Road to the Kentucky Derby to move to No. 9 on the leaderboard with a total of 60 points.

“The most impressive thing about this horse is how he handles everything so well mentally,” Walsh said. “He’s such a cool horse and nothing really bothers him. Along with his athletic ability, his mental state is a really strong one-two punch.”

The updated Road to the Kentucky Derby standings can be found on www.kentuckyderby.com/leaderboard. The next race on the schedule is the June 6, $400,000 Santa Anita Derby (GI) which awards points to the Top 4 finishers on a 100-40-20-10 scale. The newly released Belmont Park stakes schedule has the $1 million Belmont Stakes (GI) slated as June 20. The adjusted 1 1/8-mile event will award the Top 4 finishers 150-60-30-15 points.

“The (Old Forester Mint Julep) is a great spot to get both of these horses ready for the ($300,000) Just a Game (GI) and the ($350,000) Jenny Wiley (GI),” Cox said. “I think the Mint Julep will turn out to be a great race because a lot of fillies are probably just getting started like we are for races like those down the line.”

Beau Recall, owned by Slam Dunk Racing and Medallion Racing, had a stellar 5-year-old campaign with victories in the $400,000 Churchill Downs Distaff Turf Mile (GII) and $200,000 Yellow Ribbon (GII). The daughter of Sir Prancelot has been on the sidelines since a runner-up finish in the $300,000 Rodeo Drive (GI) in late September at Santa Anita.

The Old Forester Mint Julep, run at 1 1/16 miles on the Matt Winn Turf Course, is part of a stakes doubleheader Saturday along with the $100,000 Winning Colors presented by Finlandia (GIII) for fillies and mares sprinting six furlongs.

Along with Cox’s duo of Beau Recall and Juliet Foxtrot, the Old Forester Mint Julep is expected to include multiple stakes placed Altea (FR) for trainer Chad Brown, according to Churchill Downs assistant racing secretary and stakes coordinator Dan Bork. The Winning Colors field is likely to include Bell’s the One, Break Even, Mia Mischief and Spiced Perfection.

Entries for Saturday’s 11-race program will be drawn on Wednesday.

MILESTONE WATCH – Hall of Fame trainer Steve Asmussen is closing in on Churchill Downs’ all-time leading trainer Dale Romans. At the start of Sunday’s 10-race program, Asmussen trailed Romans 737-733 wins. Asmussen had four entrants on Sunday’s card while Romans had two… Churchill Downs’ all-time leading owners Ken and Sarah Ramsey were one win away from 500-career victories beneath the Twin Spires. The Ramseys have three entrants on Sunday’s program.

DOWN THE STRETCH – Sunday’s 10-race card at Churchill Downs features a $105,951 carryover in the 20-cent Single 6 Jackpot (Races 5-10). First post is 1 p.m. Free past performances and handicapping information is available here: www.churchilldowns.com/handicapping. 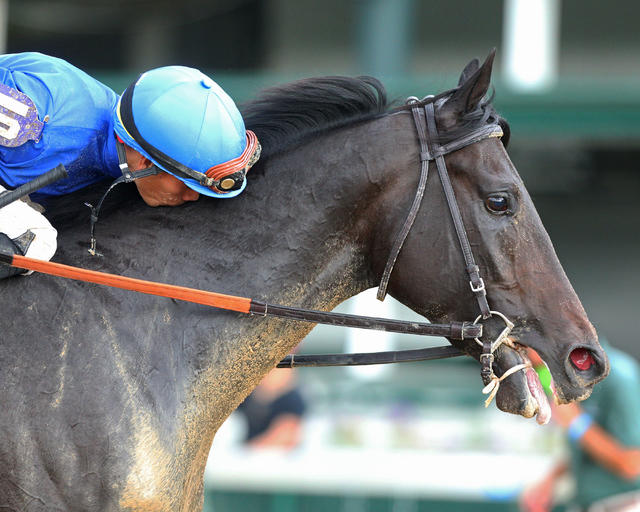