May 3, 2019
| Churchill Downs Communications
LOUISVILLE, KY (Friday, May 3, 2019) – Ashbrook Farm and BBN Racing’s Concrete Rose roared past 1-5 favorite Newspaperofrecord (IRE) nearing the sixteenth pole and drew off to a 3 3/4-length victory in the 35th running of the $250,000 Edgewood (GIII) Presented by Forcht Bank for 3-year-old fillies.
Trained by Rusty Arnold and ridden by Julien Leparoux, Concerete Rose covered the 1 1/16 miles on a Matt Winn Turf Course labeled as “good” in 1:43.34.
The victory was the third in the race for Arnold who had previously won with Darien Miss in 1988 and Everhope in 1996. Leparoux previously had won the race in 2010 with Dynazaper.
Newspaperofrecord, who handed Concrete Rose her lone defeat in last fall’s Breeders’ Cup Juvenile Fillies Turf (GI), raced out to an unopposed lead while producing fractions of :23.53, :47.87 and 1:12.68.
At the top of the stretch, Newspaperofrecord was still clear and maintained a 2 ½-length lead at the eighth pole but Leparoux had Concrete Rose in high gear and quickly zoomed past.
The victory was worth $151,900 and boosted Concrete Rose’s bankroll to $418,600 with a record of 5-4-0-0. Concrete Rose is a Kentucky-bred daughter of Twirling Candy out of the Powerscourt (GB) mare Solerina.
Concrete Rose returned $13.80, $3.40 and $2.80. Newspaperofrecord, ridden by Irad Ortiz Jr., returned $2.10 and $2.10 with Winter Sunset finishing another 2 ½ lengths back in third under Channing Hill and paying $3.80 to show.
It was another neck back to Cambier Parc, who was followed in order by New Roo, Fortunate Girl and Destiny Over Fate.
EDGEWOOD QUOTES
JULIEN LEPAROUX (rider of Concrete Rose, winner) – “The course is good, it’s nice. The rain didn’t make it too soft, and we hadn’t raced on the inside yet, so it was perfect.”
On beating Newspaperofrecord: “Before the race, she was tough to beat, but she hasn’t raced since Breeders’ Cup, so she hasn’t raced in a while. My filly was relaxed the whole time, and she made a big run at the end. I rode the race, not paying attention to the one horse, I just wanted to pay attention to my filly. She was traveling good, and was relaxed. I got out at the quarter pole, and started asking her, and I knew she was going to give a big kick. The question was if the 1 was going to come back to me. Today she was great.
“Even as a 2-year-old, she was running really good. When I rode her at Tampa, she was carrying 6 or 7 pounds more than the other fillies. She ran a big race that day. Rusty had her ready. She ran a big race today.”
RUSTY ARNOLD (trainer of Concrete Rose, winner) – “She had one bad race (Breeders’ Cup Juvenile Fillies), there were a lot of reasons for that. We ran her back pretty quick, she’s matured a lot at 3 and ran a good race. She beat a couple of good horses in there. I would have preferred for it not to have rained. But this turf is really fresh, we’ve only run on it three days. We got in on it in a lot better spot than last fall.”
Next? “I’m only looking to get beyond today. I was waiting until we got to here.”
On beating Newspaperofrecord: “It’s a different year at 3. We might have caught her at a vulnerable time. We had the race in Tampa which probably helped us. We had pointed for here, and everything went in the right way.”
IRAD ORTIZ JR. (rider of Newspaperofrecord (IRE), runner-up) – “She broke extra sharp today and I took a big hold on her. I was really holding her. Then at the end she tried, but she just got beat today.”

CHAD BROWN (trainer of Newspaperofrecord (IRE), runner-up) – "She just wasn't fit enough today. Irad [Ortiz Jr.] said she was a little keen early on turf -- it looks pretty soft -- and she set some strong fractions -- :47-and-change early. I was a little concerned. She just ran out of gas the last part of it. Hopefully, she gets a lot out of this race. It's unfortunate she's no longer undefeated, but we'll have to go on. We have a really good horse. We'll have to see what we'll do with her next."
CHANNING HILL (rider of Winter Sunset, third) – “It was a good try for her. She handled the turf course fine and gave it a good run. She’s a good filly.” 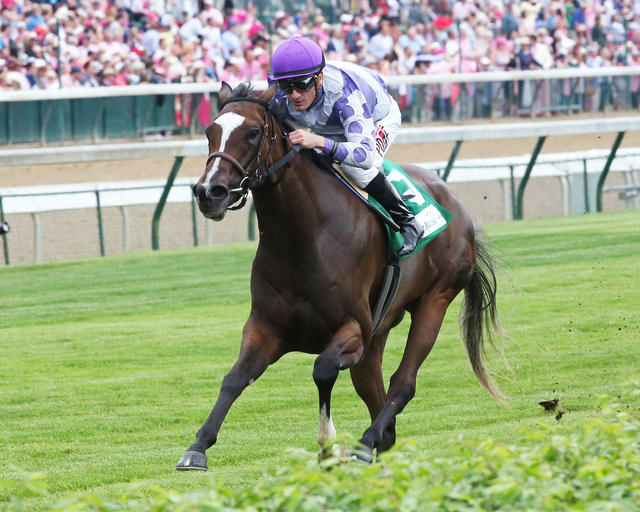