LNJ Foxwoods’ strikingly fast filly Covfefe was the first horse to work Friday morning and clipped through fractions of :12.40, :24.60, :36.60, :48 and :59.80 under exercise rider Fernando Espinoza. Covfefe galloped out seven furlongs in 1:25.40 and completed the work with a one-mile time of 1:40.60, according to Churchill Downs clocker John Nichols.

“She’s a naturally fast filly and today’s work was very strong on all accounts,” trainer Brad Cox said. “She galloped out very strong around the turn and that was by design. She worked six furlongs but started at the five-furlong pole. It was a very strong move.”

Nearly four hours after Covfefe worked, Albaugh Family Stables’ $200,000 Iroquois Stakes (GIII) winner Dennis’ Moment took to the track under regular exercise rider Tammy Fox. Trained by Churchill Downs’ all-time leading trainer Dale Romans, Dennis’ Moment blitzed through splits of :11.80, :23.40, 35 and :46.80. The son of Tiznow continued his work around the clubhouse turn with a six-furlong gallop out of 1:11.40 before concluding his work with a seven-furlong time of 1:25.80.

“We actually tried to slow him down today,” Romans said. “You know, fast horses work fast. We had him with the outrider (Greg Blasi) and Tammy didn’t break off until he was right at the pole to try to make him slow down. We tried to outsmart him but he seems to be smarter than us. He’s going to work fast no matter what.”

Dennis’ Moment is scheduled to leave Louisville to fly to California on Sunday at 10 a.m. and will have one breeze at Santa Anita prior to the $2 million Breeders’ Cup Juvenile, according to Romans.

Working immediately after Covfefe was Kent Spellman and Madaket Stables’ $200,000 Pilgrim Stakes (GIII) runner-up Andesite, who breezed under Edvin Vargas on the outside of Great Ulysses through splits of :13, :25.20 and :49 with a six-furlong gallop out time of 1:14.80.

Vargas was also aboard Michael Dubb, The Elkstone Group, Madaket Stables and Bethlehem Stables’ $400,000 Alcibiades Stakes (GI) winner British Idiom, who worked at 7:30 a.m. outside of Evil Lyn through splits of :24.20 and :48.80 prior to galloping out six furlongs in 1:15.40.

“I like to work him in the first set because that’s when I think the track is the best,” assistant trainer David Carroll said. “I think he really likes a firm ground so that is the best time to work him. It was a solid work and even with that win at Keeneland, I think he can improve from that with a firmer ground at Santa Anita. He’s naturally fast so I would think, depending on position in the gate; he’ll be near the pace.”

Irouqois Stakes runner-up Scabbard is likely to breeze next Friday, according to trainer Eddie Kenneally. Hall of Fame jockey Mike Smith has the call for the Breeders’ Cup Juvenile.

Something Special Racing’s $400,000 Woody Stephen’s Stakes (GI) winner Hog Creek Hustle is also based at Churchill Downs and is targeting the Breeders’ Cup Sprint or Dirt Mile, according to trainer Vickie Foley. 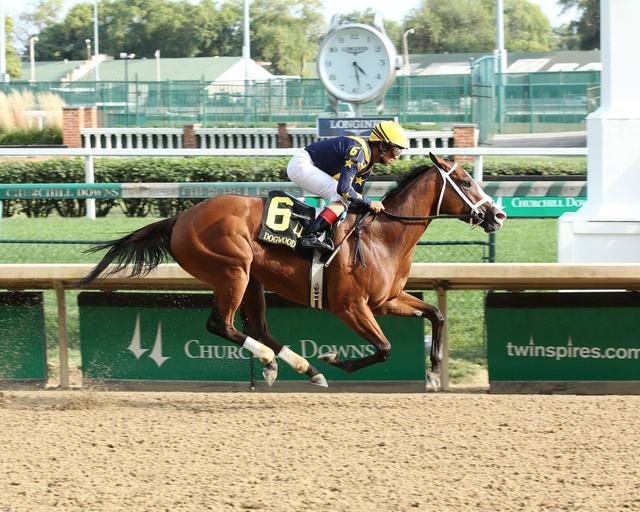