Trainer Al Stall Jr. plans a run in the $200,000 Fleur De Lis (GII) on the Stephen Foster Handicap (GI) Downs After Dark program for Paid Up Subscriber, winner of an allowance race on the May 6 Longines Kentucky Oaks (GI) undercard. (Churchill Downs)

“They looked great, both of them pulled out of the race great last night and looked good this morning,” Cox said. “Coming down the lane I was just hoping that the Stidham filly (Zipessa) wasn’t going to go by us. We’ll keep them separate next time out. Not sure what’s next on the agenda but we’ll be looking around. Obviously with Sweet Acclaim we need to shop for a Grade III somewhere. With Cash Control we’ll just make money with her now that she’s a graded stakes winner and stakes placed.”

Sent off as the 9-5 post-time favorite, runner-up Sweet Acclaim was 12-1 on the morning line odds.

“I think people saw her working and just saw that she is a tremendous work horse on dirt and turf, actually. She works very well on both surfaces and both of her wins here were impressive so she was a visually impressive horse this spring coming into this race.”

Cash Control has proven herself to handle dirt and turf well with success at the stakes level on both surfaces. Last year, she closed out her 4-year-old campaign with a triumph in the Tiffany Lass over Fair Grounds’ main track where she defeated Tiz Lately and stable mate Midnight Sweetie. Three starts ago, she made the switch to Fair Grounds turf in the Daisy Devine which resulted in a victory over Mizz Money and stable mate Street of Gold.

“We’ll probably keep her on the turf,” Cox said. “It seems to be kinder on her and she likes both surfaces. She’ll show up on dirt and turf, but she’s without a doubt a touch better on the turf. For Cash Control this is the third time in the last six or seven months that we have run her with another stable mate and she’s won every time and the other ones have either finished second or third. This is the first time that’s happened in a graded stakes for sure.”

PAID UP SUBSCRIBER WILL STRETCH OUT TO TWO TURNS FOR SATURDAY’S FLEUR DE LIS – In seven career starts Klaravich Stables Inc. and William H. Lawrence’s Paid Up Subscriber, a winner of an allowance-optional claiming event on the May 7 Kentucky Derby undercard, has yet to go around two turns. That will all change when she shoots for her first graded stakes victory in Saturday night’s $200,000 Fleur de Lis Handicap (GII) run at 1 1/8 miles for fillies and mares.

An untouched 2-for-2 when running over the Churchill Downs main track, the 4-year-old daughter of Candy Ride is in the best form she has been in, according to trainer Al Stall Jr. who is confident that she will perform well when stretching out.

“This will be her first race around two turns halfway through her 4-year-old career,” Stall said. “It’s just that the circumstances when she was a younger horse didn’t let us get this type of race so we’ve been looking for a longer race for quite some time. This is her third race after a nice freshening and believe it or not I think that she is bred to go a mile-and-a-quarter. She trains like a good horse and hopefully she can prove that on Saturday and somewhere down the lane. She’s always trained like she’s somebody, she likes Churchill and she’s in great form.”

Aside from an allowance victory on Derby Day, Paid Up Subscriber was third in a 6 ½-furlong allowance at Keeneland on April 8 and will be taking a big step up in class when she run in the Fleur de Lis.

“She’s firm for the race,” Stall said. “It’s hard to be super confident when you’re going up against some stiff competition which you can’t control. She looks good physically and with the quality of races that she’s run in, she got in trouble in the race on Derby Day and still overcame it and won. Her numbers say that she’s better than she was when she was a younger horse. It’s a risky type of gamble we’re taking, but we don’t mind.”

No jockey has been assigned the mount aboard Paid Up Subscriber.

Other known probables for the Fleur de Lis include Ahh Chocolate, Big Book, Brooklynsway, and Untapable.

“I was getting text messages like bombs away and I didn’t even know what people were talking about,” Bradley said. “My team does such a great job with these horses. We had our second time starter (A Terrific Shot, Race 2) put in a fast time and our first time starter (Nawlins Kitty, Race 10) put in a big effort despite some traffic trouble.”

Bradley’s third win of the day came with Divine Warrior, who lit up the tote board at odds of 46-1 as the longest shot in the field of eight.

“He had been training real well going into the race,” Bradley said. “We knew that he had to step up big for it, and sure enough he did.”

As far as Divisidero is concerned, Bradley has not made any future plans for his next start but said that he is shipping back to his Churchill base on Sunday afternoon.

“He came out of it well,” Bradley said. “We’re really pleased with how he ran. That’s just how things come up sometimes in these big races. The winner looks like he was in a different league.” 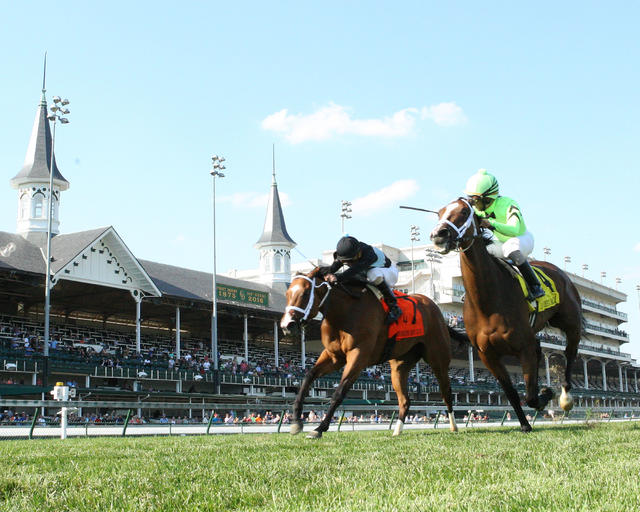