Normandy Farm’s homebred Daddys Lil Darling made a sweeping five-wide move late to take Saturday’s 48th running of the $200,000 Pocahontas Presented by TwinSpires.com (Grade II) by a diminishing half-length over hard-charging Ever So Clever at Churchill Downs.

The field of nine 2-year-old fillies was strung out early as Texas-invader Bling On the Music and Jet Away Sue lead the field through fractions of :23.39, :47.50 and 1:13.75 with Daddys Lil Darling and Ever So Clever both allowed to settle several lengths behind. Hitting their best stride late, Daddys Lil Darling forged to the front inside the final furlong and held off Ever So Clever who split horses and kicked on well late.

“She was holding on but she was getting a little tired because I moved a little earlier to keep (narrow 5-2 favorite Dream Dancing) from boxing me in and it was kind of taking its toll on me a little bit,” Lanerie said. “But she had a lot of heart. She felt great. She’s a charm to ride and has a lot of class. I think a little kid could ride her.”

Daddys Lil Darling, a Kentucky-bred daughter of Scat Daddy out of the Houston mare Miss Hot Salsa, banked $119.040 for the win and guaranteed herself a starting spot in the $2 million 14 Hands Winery Breeders’ Cup Juvenile Fillies (GI) on Nov. 5 at Santa Anita. The Pocahontas is part of the Breeders’ Cup “Win and You’re In” Juvenile Fillies Challenge Division, which means the winner will also will have her entry fees and a travel allowance paid by Breeders’ Cup.

Daddys Lil Girl also is the early points-leader on the Road to the Kentucky Oaks after collecting 10 points. The Pocahontas was the first of 30 qualifying races to the $1 million Longines Kentucky Oaks (GI) to be run next May, and points were awarded to the Top 4 finishers on a 10-4-2-1 scale.

Dream Dancing, Jordan’s Henny, Sully’s Dream, I’mluckysgirl, One Thirty One and Jet Away Sue completed the order of finish. Someday Soon was scratched.

Daddys Lil Girl entered the Pocahontas off an eighth-length win over one mile at Ellis Park on July 29 in her second career start.

KENNY McPEEK, trainer of DADDYS LIL DARLING (winner): “She is a really good filly and we felt pretty confident coming in. I think as comparing to (last year’s winner) Dothraki Queen I think she’s a little bit of a bigger, stronger filly but she ran super. We’ll see what we can do. I don’t think I’ll run her in the ($400,000) Alcibiades (on Oct. 7 at Keeneland). She’s a real lean filly; she doesn’t carry much weight. I think we’d be a lot more prudent to wait for the ($2 million) Breeders’ Cup (Juvenile Fillies at Santa Anita on Nov. 5).”

COREY LANERIE, jockey of DADDYS LIL DARLING (winner): “She was holding on but she was getting a little tired because I moved a little earlier to keep (Dream Dancing) from boxing me in and it was kind of taking its toll on me a little bit. But she had a lot of heart. She felt great. She’s a charm to ride and has a lot of class. I think a little kid could ride her.”

RICARDO SANTANA JR., jockey of EVER SO CLEVER (runner-up): “She’s a really nice filly. The track is really fast and that cost me the race. She’s nice. She’s going to be one good filly next year for sure.” 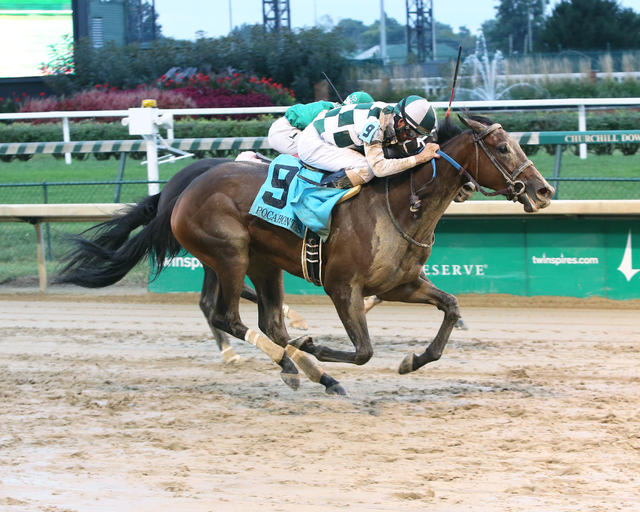