Dalika (GER) went straight to the front and was collared by Princess Grace at the top of the stretch but re-rallied along the inside to determinedly win Saturday’s 32nd running of the $500,000 Beverly D. Stakes (Grade I) at Churchill Downs.

Dalika (GER) broke alertly from the rail and led the compact field of five fillies and mares through fractions of :23.14, :46.44 and 1:10.13 with Princess Grace stalking in second.

Around the final turn, Princess Grace drew even with Dalika (GER) and poked her head in front at the top of the stretch, but Dalika (GER) was resolute on the rail and came back inside the final sixteenth of a mile for a half-length win.

“I really have to thank trainer Tom Drury who helps us out with this horse at Skylight (Training Center),” Stall Jr. said. “She’s a little bit tough to train so we’ve been keeping her out there where it’s pretty quiet. She was pretty comfortable on this course. Things played out exactly how we thought it would. We figured (Princess Grace) would be next to us and she ran a really game race, too.”

It was another two lengths back to third-place finisher Family Way, who was followed by Irish invader Lily Pond (IRE) and 8-5 favorite Rougir (FR).

“She’s a pretty funny horse so the less you can do with her the better,” Hernandez said of Dalika (GER). “We let her have things her own way on the front end and I didn’t want to try and fight her at all. In the stretch, (Princess Grace) came up alongside her but she was really game. She dug back in and turned her back. She ran a huge race and showed a lot of heart.”

The win was worth $310,000 and improved Dalika (GER)’s career earnings to $954,856 with a record of 8-7-0 in 28 starts. It was the fifth stakes victory of her career and first Grade I triumph. Additionally, the Beverly D. is part of the Breeders’ Cup “Win and You’re In” series and Dalika (GER) earned an automatic berth into the $2 million Filly & Mare Turf (GI) on Nov. 5 at Keeneland Race Course.

“She’s not Breeders’ Cup nominated so we’ll have to figure out what’s next,” Stall Jr. said. “We’re thrilled to get this win today.”

Dalika (GER), a 6-year-old gray or roan daughter of Pastorius (GER) out of the Hurricane Run (IRE) mare Drawn to Run (IRE), was bred in Germany by Gestut Ammerland. Twenty of the last 21 Beverly D. winners have been bred outside the United States. 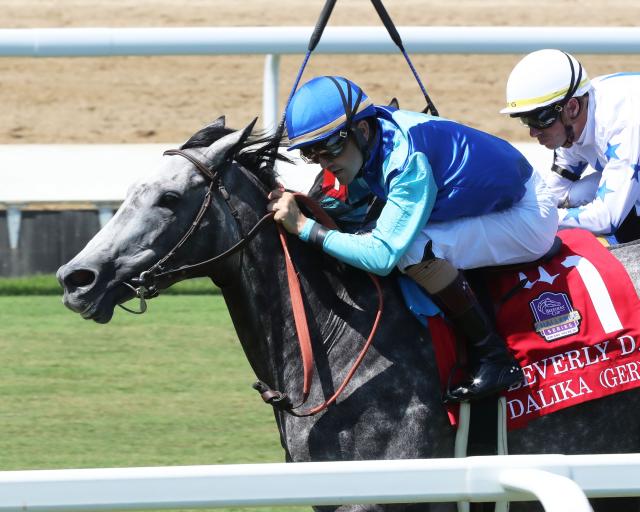