Tamaroak Partners’ Bango split rivals in deep stretch to win Saturday’s 34th running of the $200,000 Aristides (Listed) at Churchill Downs for the second year in a row, this time by 2 ½ lengths over Necker Island.

Trained by Greg Foley and ridden by Tyler Gaffalione, Bango completed the six-furlong Aristides in 1:08.54.

“He loves this track and is a super nice horse,” Gaffalione said. “We got away a bit slow but sat in a good position off the pace. He kept finding more with every stride.”

Long Range Toddy set a swift early quarter-mile fraction in :21.97 with Top Gunner in close pursuit as Necker Island and Bango rated in fourth and fifth, respectively. Around the turn, Top Gunner poked his head in front after a half-mile in :44.74 and briefly kicked clear. As Top Gunner wearily drifted out in the stretch, the closing Bango came through the opening and was able to easily prevail over Necker Island, who rallied along to rail to win a three-way photo for the place with Top Gunner and Long Range Toddy.

In his first start of 2022, Bango finished fourth and was beaten 9 ¾ lengths in the St Matthews Overnight Stakes on May 4.

“What a nice horse,” said Foley, who also won the 2004 Aristides (GIII) with Champali. “He loves this track and that’s home for us. He needed that last race off the layoff and I guess they (bettors) forgot how much he loves it here. He’s 7-for-13 now. That speaks for itself. He got off a bit slow from the rail today and he’s shown he can be a multi-dimensional horse. Tyler gave him a great ride and was able to get him to relax.”

Bango is a 5-year-old son of Congrats out of the Smart Strike mare Josaka. He was bred in Kentucky by his owners Fred and Debbie Schwartz.

The next sprint for older horses at Churchill Downs is the $160,000 Kelly’s Landing Overnight Stakes at 6 ½ furlongs on Saturday, July 2.

“Fred and Debbie Schwartz have a really nice horse and we’ll try to run him as much as we can this year at Churchill,” Foley said. 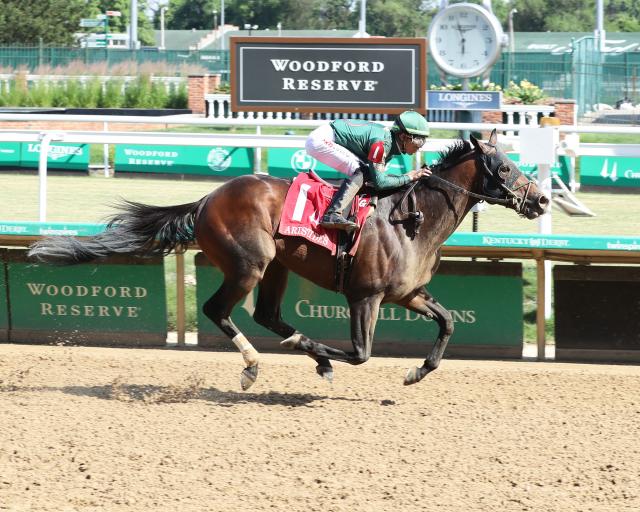