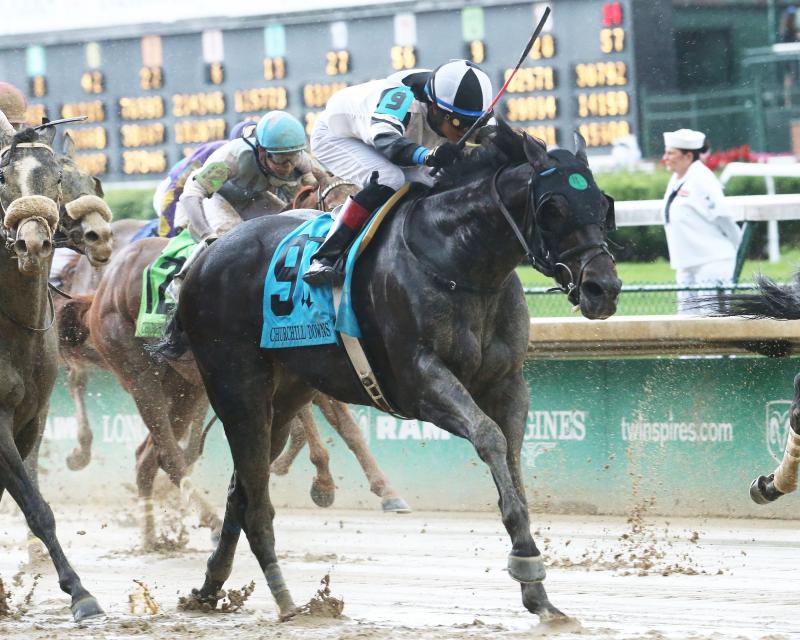 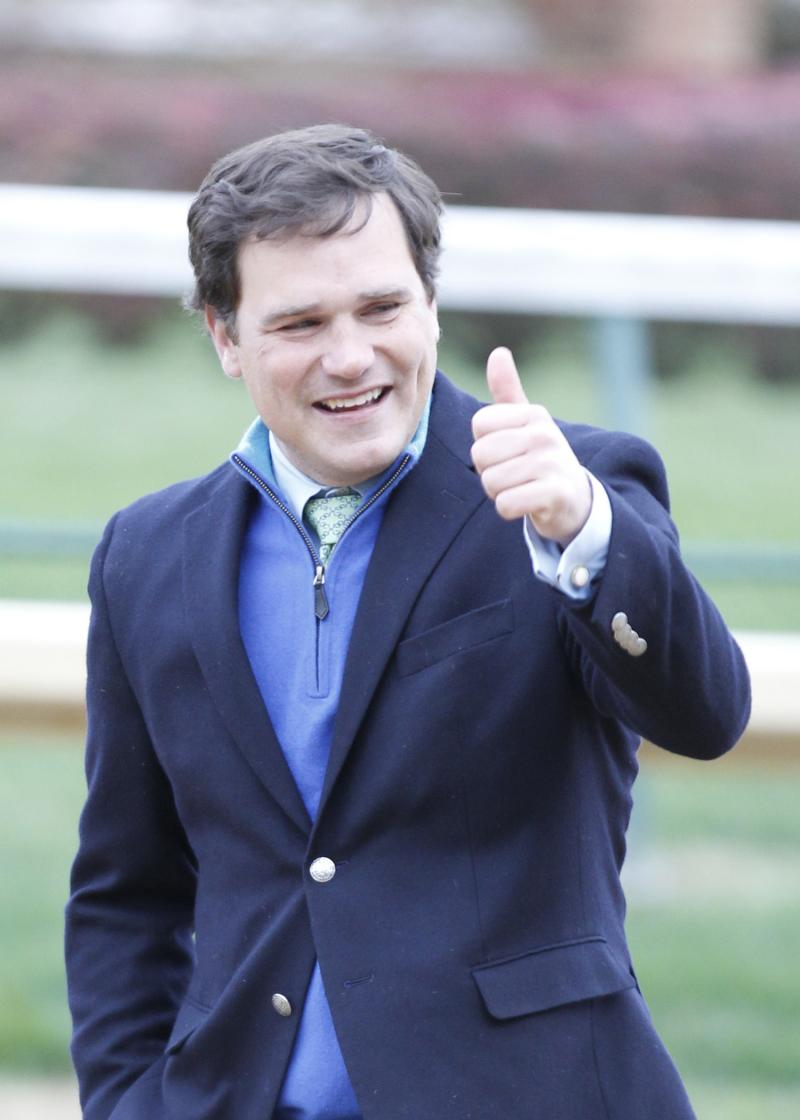 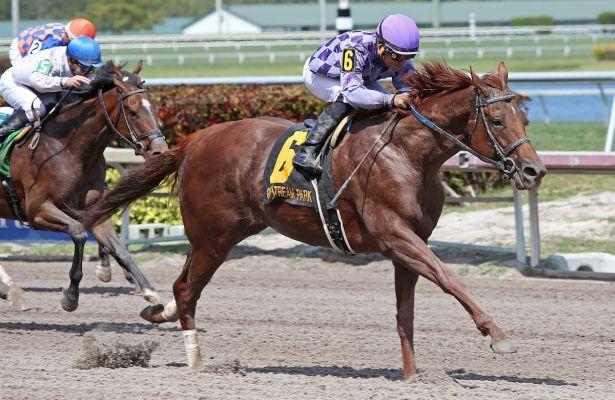 Harold Lerner LLC and Magdalena Racing's The Truth or Else rallied from far back to win the $100,000 Sir Shackleton for trainer Kenny McPeek at Gulfstream Park. (Liz Lamont, Eclipse Sportswire) 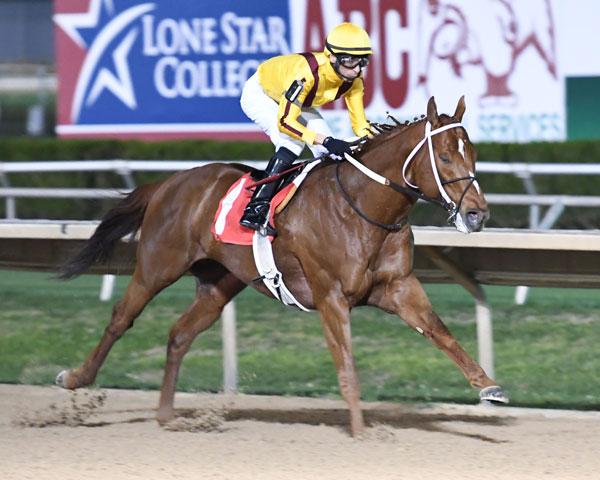 Limousine Liberal, who scored a breakout win in the $500,000 Churchill Downs Stakes Presented by TwinSpires.com (Grade II) on the May 6 Kentucky Derby undercard, headlines a field of eight older horses that were entered for Saturday’s 29th running of the $100,000 Aristides at Churchill Downs.

The six-furlong Aristides, which is named in honor of the inaugural Kentucky Derby winner of 1875, is one of two stakes events on Saturday’s 11-race program. Churchill Downs’ first race is 12:45 p.m. (all times Eastern). The Aristides goes as Race 10 at approximately 5:21 p.m. and the second running of the $65,000-added Mighty Beau Overnight Stakes, a five-furlong sprint on the Matt Winn Turf Course, is the ninth race at approximately 4:51 p.m.

Katherine Ball’s 5-year-old homebred Limousine Liberal, who has finished second or third in six graded stakes events since 2015, landed his first career stakes win when he overtook favored Masochistic at the head of the stretch and then held off a late bid from Awesome Slew to win the 83rd Churchill Downs by a head. The Churchill Downs triumph pushed Limousine Liberal’s earnings to $771,120 with a record of 14-4-5-1.

The gelded son of Successful Appeal had typically run fast against top competition but often came up short. At age 3, Limousine Liberal was second to eventual 2015 champion sprinter Runhappy in the $500,000 King’s Bishop (GI) at Saratoga and then was beaten a neck in the $300,000 Gallant Bob (GIII) at Parx. Last year, the Kentucky-bred was second in a trio of graded stakes: the Aristides (GIII), $250,000 Smile Sprint (GII) at Gulfstream Park and $250,000 Phoenix (GIII) at Keeneland. He also has competed in the last two renewal of the Breeders’ Cup Sprint (GI), finishing 11th at Keeneland in 2015 and fourth at Santa Anita last year.

“This horse has been showing up every time,” Lexington, Ky.-based Ben Colebrook said. “It’s great that he’s finally a graded-stakes winner.”

Limousine Liberal, who will break from the outside Saturday under leading rider Corey Lanerie, was beaten a head in last year’s Aristides by the now-retired millionaire Alsvid, who won the race for a second year in a row.

This year’s rivals include stakes winners Harold Lerner LLC and Magdalena Racing’s The Truth or Else (29-6-3-6—$579,556), winner of the $100,000 Sir Shackleton on the Florida Derby undercard at Gulfstream Park for trainer Kenny McPeek, and Stonestreet Stables’ Union Jackson (9-5-1-2—$208,924), who returns to action 16 weeks after scoring an 8 ¼-length breakthrough stakes win in the $50,000 Sam Houston Sprint Cup for Hall of Fame trainer Steve Asmussen.

Union Jackson finished third, a half-length back of Limousine Liberal, in last year’s Aristides, and the 5-year-old will attempt to give Asmussen his record-extending fourth win in the race. His previous Aristides successes came with Mountain General (2003), Riley Tucker (2010) and Rothko (2012).

Chris Hartman, who trained 2015-16 winner Alsvid, will attempt to saddle the Aristides winner for a third year in a row. This year he enters Chris Wilkins’ Wilbo (18-6-2-5—$282,836), a 5-year-old gelded son of Candy Ride (Arg) who seeks his first stakes triumph after prevailing in a long stretch drive with Aristides rival Recount to win a six-furlong allowance/optional claiming event in 1:09.47 at Churchill Downs three weeks ago. Doubledown Stables Inc.’s Recount (28-11-6-3—$553,507) won last fall’s $78,980 Bet On Sunshine Overnight Stakes at Churchill Downs for trainer Jimmy DiVito.

Limousine Liberal will carry 124 pounds, while all others will tote 120.

The Twilight Thursday abbreviated eight-race program starts at 5 p.m. and is highlighted by $1 beers, food trucks (Holy Mole, Red Top Gourmet Hot Dogs, Pollo, 502 Café, Mark’s Feed Store and Zoom Zoom Yum), live music on the Plaza stage by pop band Maximón and a Wagering 101 tent for betting advice. There also is a $9,252 jackpot carryover for the 20-cent minimum Single-6 Jackpot on Races 3-8, and a $4,898 carryover in the $1 Super Hi-5 for the final race of the day.

Sunday’s 10-race card features the year’s first Family Adventure Day Presented by Kroger. The day of racing is complimented by plenty of family activities in the Plaza area including pony rides, inflatables, a petting zoo, stick horse races, face painting and more. There also will be a special “meet and greet” with popular “Trolls,” Poppy and Branch.

Unlimited access tickets to all kid-friendly activities on Family Adventure Day are $8 when purchased in advance online at www.ChurchillDowns.com. There also is a special Family Four Pack ($44 for general admission or $59 for box seats), which includes four Family Adventure Day tickets, four family meals from the concession stands in the Plaza area and two racing programs.

Churchill Downs admission gates will open at 4 p.m. Thursday and at 11:30 a.m. Friday-Sunday. General Admission is $3 daily, reserved seating is $10 and reserved dining packages start at $38. 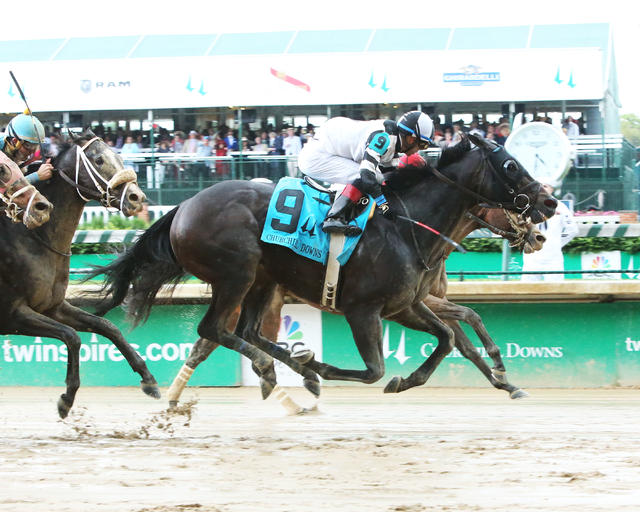