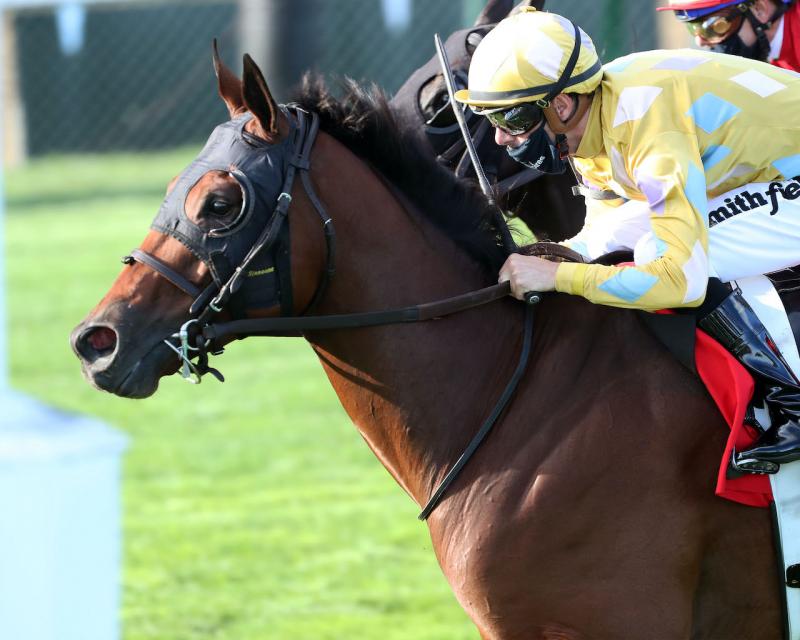 Trained by Patrick Biancone and ridden by Florent Geroux, Diamond Oops covered the 5 ½ furlongs on a Matt Winn Turf Course rated as good in 1:04.18.

The victory was the fifth of the afternoon for Geroux who took the day’s final three races with scores in the Longines Kentucky Oaks (GI) on Shedaresthedevil and the La Troienne (GI) on Monomoy Girl.

The Twin Spires Turf Sprint marked a return to the grass for Diamond Oops whose most recent turf start was last October with a runner-up finish in the Shadwell Turf Mile (GI) at Keeneland.

It was another neck back to Chaps who was followed in order by Real News, Smart Remark, Carotari, Jazzy Times, Chief Cicatriz, Tell Your Daddy, Fielder and Wellabled.

Florent Geroux (winning rider, Diamond Oops) -- “He ran big. He's an amazing horse. Patrick (Biancone) always told me this horse has a little bit of some kind of physical problems, but he has the heart of a champion. He'll run on any kind of surface, any distance, from six furlongs to a mile. We saw him last year when he almost pulled it off in the (Grade1) Shadwell Turf Mile. I have no idea what's next for him, because he runs turf, he runs dirt, he does everything."

Brendan Walsh (trainer, Extravagant Kid, second) -- "He ran well. Looked like he had the race won. He did that the one time he got beat here at Churchill, he made the front a little too soon. But in fairness to (jockey) Tyler (Gaffalione), he thought he had everybody covered. You can't just sit on him. He had to go with it, and we got caught out. But hat's off to the winner. They won the race. But he showed up again. We can't ask for much more than that. It would have been nice to win, but there you go."