LOUISVILLE, KY (Saturday, May 4, 2019) – Klaravich Stables’ Digital Age (IRE) remained undefeated as he posted a three-quarters of a length victory over A Thread of Blue to win the 28th running of the $400,000 American Turf (GII) Presented by Ram Trucks for 3-year-olds.

It is the second time Brown and Ortiz have teamed to win the American Turf, having scored in 2016 with Camelot Kitten. Brown also won the race in 2013 with Noble Tune.

A Thread of Blue led the field through fractions of :24.19, :49.32 and 1:14.09, as Ortiz kept Digital Age next to the hedge. On the far turn, Digital Age moved off the inside and entered the stretch with clear sailing and eventually wore down A Thread of Blue.

Digital Age is an Irish-bred son of Invincible Spirit (IRE) out of the Lemon Drop Kid mare Willow View.

It was another three-quarters of a length back to Seismic Wave with War Film, Avie’s Flatter, The Black Album (FR), Henley’s Joy, Casa Creed, Louder Than Bombs, Marquee Prince, Forever Mo and Weekly Call following in order.

IRAD ORTIZ JR. (rider of Digital Age (IRE), winner) – “I got a perfect trip. I saved ground and when I wanted to tip him out I tipped him out and he just exploded. He's a nice horse. He gets better and better every time he runs."

CHAD BROWN (trainer of Digital Age (IRE), winner) – “He saved a lot of ground. He was stuck on the inside of the turf course, which is a double-edged sword. You want to save ground in these turf races, but clearly the outside of the turf course is a little bit better. I was just hoping Irad found good ground, and he did a good job of it. You’ve got to respect this horse, he knows where the wire is. He knows when to kick and he can get there in time. We bought him as a yearling at Newmarket. We just took our time getting him to the races. He had a few baby issues, but the owners were real patient. His time is now.”

LUIS SAEZ (rider of A Thread of Blue, runner-up) – “We had a great trip. He relaxed on the lead and I really thought we could hold on.”

MANNY FRANCO (rider of Social Paranoia, third) – “I wanted to get outside, but I couldn’t. There were just too many horses outside me all the way around. He still ran real good. He’s a nice horse.”

TODD PLETCHER (trainer of Social Paranoia, third) – “We wanted to get outside. It’s soft down inside there. But

he still had a good trip and a good run. The rider’s good and he rode him well.” 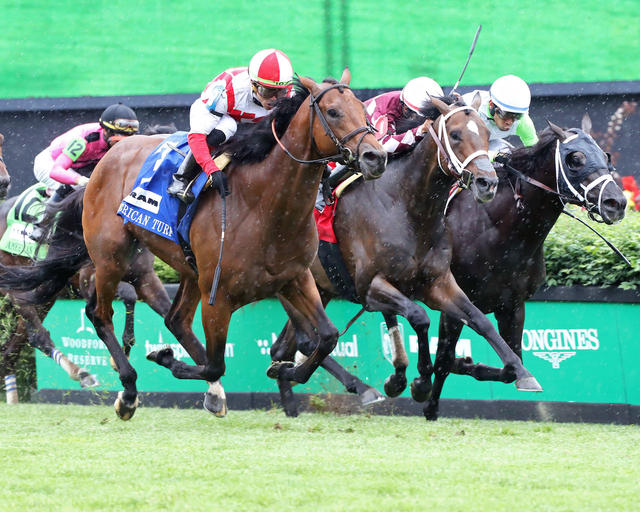