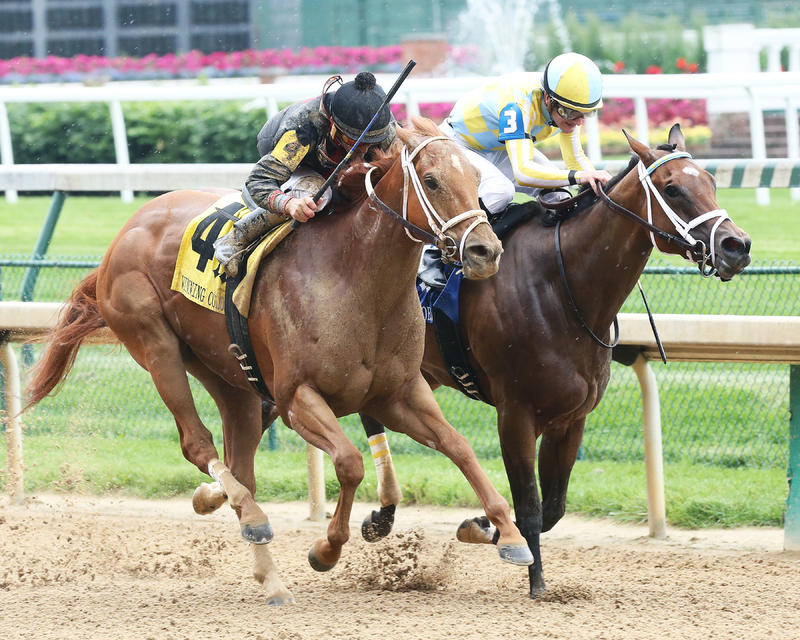 Diva Express and jockey Shaun Bridgmohan (inside) and I'm A Looker and Robby Albarado (left) battled to a finish in the $100,000 Winning Colors (Grade III) in which they could not be separated. The 4-year-old fillies settled for a dead-heat victory in the six-furlong stakes race at Churchill Downs. (Coady Photography | Churchill Downs) 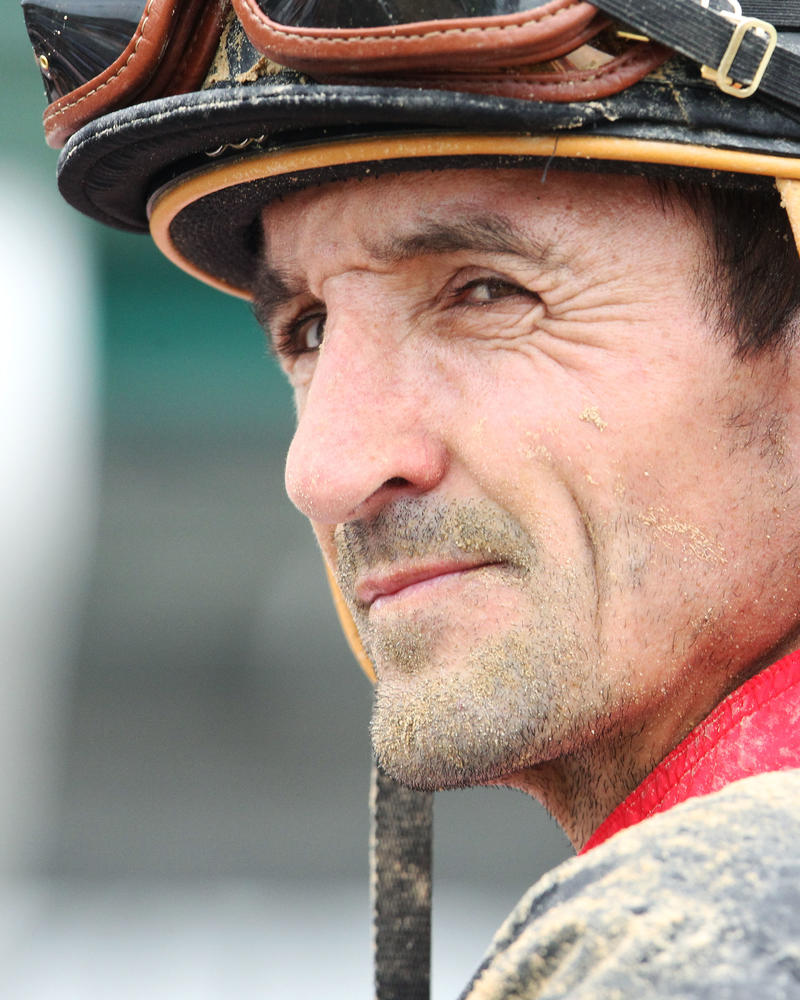 Jockey Robby Albarado added another victory to his roster of stakes triumphs at Churchill Downs when he guided I'm A Looker to a dead-heat with Diva Express for the win in Saturday's $100,000 Winning Colors (Grade III). (Coady Photography | Churchill Downs) 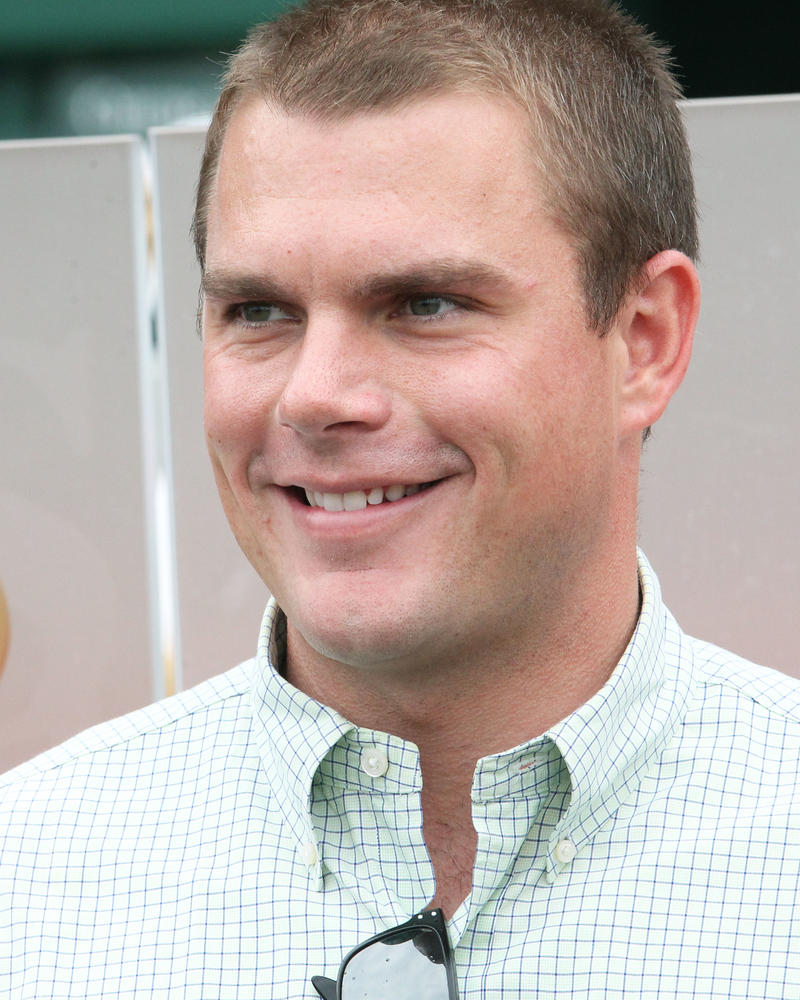 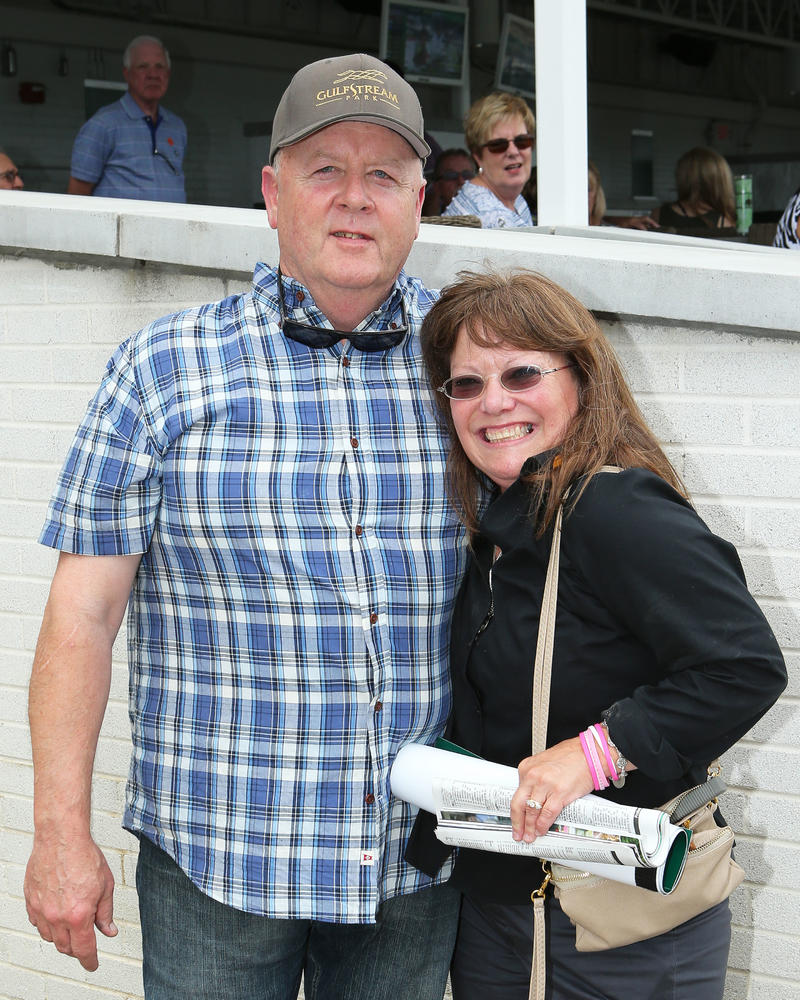 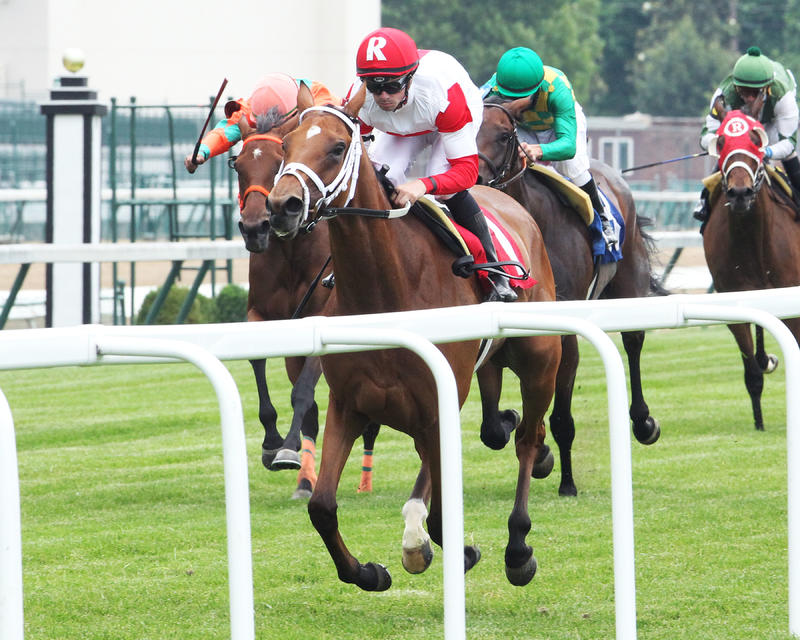 It was the first dead-heat in a Churchill Downs stakes race since Demarcation and Karelian couldn’t be separated in the 2008 River City Handicap (GIII).

In the early stages of the six-furlong sprint, Diva Express, with Julien Leparoux up, tracked pacesetter and 4-5 favorite Enchanting Lady, who led the field of seven fillies and mares through fractions of :21.26 and :44.28. Meanwhile, I’m a Looker, ridden by Robby Albarado, trailed the field after breaking a bit slowly.

Diva Express grabbed the lead at the head of the stretch as I’m a Looker swept her way into contention with a four-wide move around the final turn. As the two battled gamely down the lane, a determined I’m a Looker appeared to get by Diva Express inside the final 50 yards but a resolute final lunge at the wire by Diva Express created the dead heat.

Diva Express, trained by Mark Casse, returned payoffs of $6, $3.60 and $4.20. I’m a Looker, trained by Pat Dupuy, rewarded her backers with $9.40, $7.40 and $4.80. Spelling Again, winner of the Grade II Chilukki at Churchill Downs last fall, was gaining quickly in the final stages under Shaun Bridgmohan but finished three-quarters of a length back of the winners and paid $3.20 to show.

The winners received $40,180 each. Diva Express, a 4-year-old Kentucky-bred daughter of Afleet Express, won for the fourth time in 11 starts and increased her bankroll to $194,945. I’m a Looker, a 4-year-old Henny Hughes filly bred in Kentucky, won for the third time in 15 career starts and hiked her earnings to $180,980 to give Dupuy and Chester Miller, who heads Glenmare Farm, their first Churchill Downs stakes wins.

Both fillies collected their first stakes wins, and renewed a budding rivalry. Diva Express beat I’m a Looker by a head in a swift second-level, six-furlong allowance on May 3 at Churchill Downs that was clocked in 1:08.85 – the second fastest time at the distance this meet only behind W. B. Smudge’s 1:08.64 on May 19.

The Winning Colors is named in honor of Eugene Klein’s Winning Colors, the most recent filly to have won the Kentucky Derby when she beat the boys in the 114th running of the Run for the Roses in 1988 for the Hall of Fame tandem of trainer D. Wayne Lukas and jockey Gary Stevens.

Earlier on the 11-race program, Ken and Sarah Ramsey’s 5-year-old mare Al’s Gal stalked the early pacesetters before taking command at the top of the lane and drawing away to a comfortable 5 ½-length win over Sequiota in the fourth running of the $58,550 Keertana Overnight Stakes. Al’s Gal, trained by Mike Maker, ran 1 ½ miles over a firm Matt Winn Turf Course in 2:28.13 under Florent Geroux to collect sixth win in 22 starts. The Pennsylvania-bred daughter of English Channel paid $3.20 to win as the odds-on 3-5 favorite in the field of eight fillies and mares, and banked $32,460 to push her career earnings to $279,855. The Keertana was her first stakes triumph.

JULIEN LEPAROUX, jockey of DIVA EXPRESS (dead-heat winner): “I thought he (Robby Albarado) beat me. He got in front of me in the stretch. The only thing I knew is that she put her head down at the wire and when it takes that much time to look at the photo you always hope for a dead-heat. It was exactly the same race as last time; I was right there and Robby came to me. Last time I beat him by a head and this time we dead-heated. I wasn’t looking at where Robby was during the race but I’m pretty sure we were about at the same spot. I thought I was winner around the far turn. I was doing it very easy and when I asked her she kept coming back for me. Both fillies deserved the win. It’s been a great meet so far, now we just have to keep going, knock on wood.”

NORMAN CASSE, assistant trainer of DIVA EXPRESS (dead-heat winner): “We’re very excited about the win. She’s really trained well so I thought that she would run big and she did. We’re really happy with the win and to share this race with the connections of the other horse. I was under the impression that we got beat but we got our nose down at the right time. It’s great to finally get a stakes victory with her. We’ll check her out in the morning, regroup and see where to go from here.”

ROBBY ALBARADO, jockey on I’M A LOOKER (dead-heat winner) – “She ran super. I loved the pace up front and I had a really, really, really good trip. She brought her patented run like she always does – you’ve got to time it good with her. She’d been training really well. She runs off her training, so she was doing really well. She looked good and she was alert in the post parade. She’s a nice filly.”

Q: At what point in the stretch did you think you might win it? “When I saw Julien (Leparoux on Diva Express) was pumping on her just about the whole way and she never had a breather, I thought ‘I’m gonna be the last one runnin’ at her,’ and I was. Maybe in the stretch I thought I’d just draw away from them, but they’re nice fillies. They went nine, nine-and-change – I mean they’re good fillies, both of them.”

PAT DUPUY, trainer of I’M A LOOKER (dead-heat winner) – “She ran a great race and Robby (jockey Robby Albarado) rode a great race on her. He saved ground on her. I’m tickled to get the dead-heat. It looked like she won, but I’ll take it.

“She’s a nice filly. She trained great since the last race and she’s never looked this good. Hopefully she’s got one or two more in her like this.”

BRAD COX, trainer of SPELLING AGAIN (third) – “She ran well. We were a little disappointed that she wasn’t up in the race a little more (early). That’s just her with dirt hitting her in the face, it wasn’t anything the jockey did. He (Shaun Bridgmohan) did a great job riding her. I think if, maybe, she’d been up in the race a little more, it would have been a different story. She was definitely ready to run and she was running back on two weeks rest, but she didn’t handle the dirt in her face at all. Once she got out in the clear coming off the turn and saw clear racetrack, she took off. It was just too little, too late.”

Q: Any thoughts on the next race for Spelling Again? “Honestly, no. One of the reasons I wanted to try this race today is that she was two-for-two on the track and there were not a lot of options during the rest of the meet for her. I wanted to get a race into her over this track. She bounced out of the New York race (third in the GI Ruffian) in good order, and think that she showed today that she did. We’ll just regroup with her and give her time. We’ll let her tell us when she’s ready to run.”

FLORENT GEROUX, jockey of AL’S GAL (winner): “It worked out great. She broke very sharply from the gate and from there I was about to take her in good position and from there she showed me a great kick down the lane.”

MIKE MAKER, trainer of AL’S GAL (winner): “Her last two starts it seemed like she found something that cost her the race every time. I’m glad that she’s finally a stakes winner. She deserves it today. Not sure where we’ll go next, but where ever it is, we’ll be going a mile-and-a-half. On paper I was concerned with the pace. She put Florent (Geroux) in the race and just did her thing.” 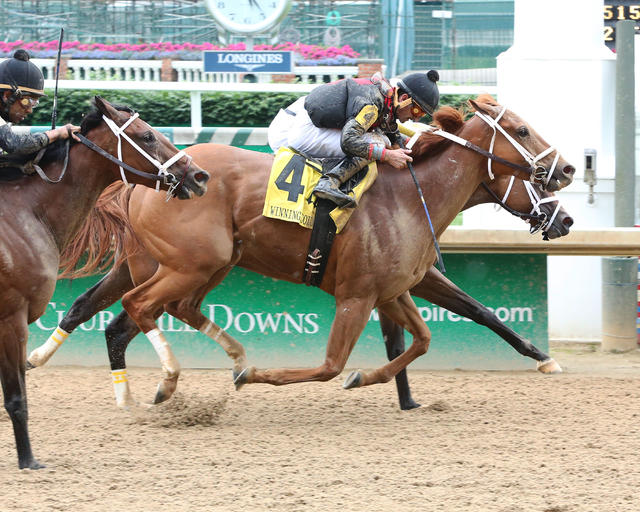