Throughout the last six months, trainer “Buff” Bradley and owner Carl Hurst have spent thousands of dollars rehabbing their “pride and joy” The Player after he suffered a near-fatal injury in late March. The colt finally returned to Bradley’s farm on Friday and, in a true fairytale ending, Bradley and Hurst were rewarded Saturday when their 51-1 longshot Divine Queen scored a shocking victory under Hall of Fame jockey Calvin Borel in the $100,000 Dogwood (Listed) at Churchill Downs.

“This win is for The Player,” said Bradley, who was fighting back tears in the winner’s circle. “It’s been a long week and this is truly unbelievable.”

Divine Queen, a homebred by Divine Park out of Bradley and Hurst’s stakes-winning mare Town Queen, was the longest-priced horse in the race.

“It’s like another Hollywood movie,” said Borel, who won the 2009 Kentucky Derby in similar fashion aboard Mine That Bird. “Buff and Carl had a lot going on this week with The Player and I’m so happy for that horse and (Divine Queen). It’s just too cool.”

The Player was a fan-favorite on the backstretch of Churchill Downs. Fans would frequently visit the flashy-chestnut colt as he laid in his stall and stuck his head beneath the webbing in search of peppermints.

Then, on March 24, tragedy struck when The Player suffered a near-catastrophic injury in the New Orleans Handicap (Grade II) at Fair Grounds.

“We were looking at a big year for this horse when that day came,” Bradley said. “He nearly broke the track record in the Mineshaft (GIII) and was coming into great form. When the incident occurred in the New Orleans Handicap, I could tell it was bad when I was running up the track to him. I think Calvin had a lot to do with saving his life. He got him pulled up as quickly as he could.

“When I got to him I knew it wasn’t good. I’m thinking this is the last day of my training career because I didn’t think I could do this anymore without The Player in the barn. I loaded him on the van and wouldn’t let anyone else touch him. I was with him when he was born and I was going to be with him all the way. I got him on the van and on our way back to the barn I said to him, ‘I’m going to do everything I can to save you but, buddy, you have to help, too.’”

The Player suffered two sesamoid fractures in his right front leg and had surgery at Louisiana State University to fuse the bones back together.

“I got on the phone with the vet and he explained he could do the surgery but the biggest risk would be any complications after the surgery with infection,” Bradley said. “Carl and I sat in my office and talked about the options and we both agreed we needed to do everything we could to save the horse. And, we did.”

The Player spent nearly six months at the LSU clinic recovering and rehabbing until he was stable enough to make the van ride back to Bradley’s Indian Ridge Farm in Frankfort, Ky.

Bradley traveled Thursday to pick up The Player and made a nearly 24-hour trip back to his family’s farm.

“The thing that a lot of people love about this horse is his personality,” Bradley said. “That’s what helped him throughout this recovery. He’s such a smart horse and he wouldn’t push himself to allow his leg to heal. Does his leg look the same? No. However, I know it is not in any pain. He’s back grazing at the farm and in the stall right across from (Grade I winner) Brass Hat. Now, I’ll have to see if a farm out there is interested to have him meet a couple of girlfriends.”

Fans can track The Player’s progress through his Facebook page: https://bit.ly/2I9YvuP. Bradley hopes to have an open house at his farm in the upcoming months.

“She certainly has a lot of talent and ability,” Cox said. “She’ll definitely be better around two turns in the future. She’s a naturally fast filly and we think very highly of her. She has a natural athletic look a lot of scope and good length.”

Take Charge Angel tracked the early lead and comfortably won by five lengths in the 6 ½-furlong maiden special weight in a final time of 1:17.59.

One week prior to Take Charge Angel’s victory, Cox debuted the heavily-touted Covfefe at Churchill Downs who won a six-furlong maiden special weight by 9 ¼ lengths. Covfefe’s workmate, Unholy Alliance, won her debut in the very next race by three lengths.

“I don’t know what it is about the fillies but we are doing well with a lot of them,” assistant trainer Jorje Abrego said. “It’s been a great week. All three of these fillies are very nice and I’m sure there are some stakes races up the road for them.”

SINGLE 6 JACKPOT HIT SATURDAY ON TWINSPIRES.COM FOR $33,929.52 – A TwinSpires.com customer correctly tabbed the last six winners on Saturday’s program at Churchill Downs to be the only winning ticket in the 20-cent Single 6 Jackpot, which returned $33,929.52.

Entries for Saturday’s card will be drawn Wednesday

DOWN THE STRETCH – There is a $7,580 carryover in the $1 Super Hi 5 Sunday in Race 10 at Churchill Downs. First post for the 10-race card is 12:45 p.m. (all times Eastern). … The September Meet will close with racing Thursday – Sunday. Thursday is the final Twilight Thursday of 2018 with an eight-race that begins at 5 p.m. The evening features $1 beer, live music from Roadie and local food trucks. Friday’s 10-race program has a first post of 12:45 p.m. Saturday is Downs After Dark Presented by Budweiser with an 11-race program that kicks off at 6 p.m. The theme is “Bourbon and Beats” and guests are encouraged to wear shades purple to stay in tuned with autumn fashion and celebrate the upcoming Breeders’ Cup World Championships on Nov. 2 and 3 at Churchill Downs. Sunday’s closing day has a first post of 12:45 p.m. … Longines Kentucky Oaks (GI) winner Monomoy Girl is expected to return to Churchill Downs Sunday evening, according to assistant trainer Jorje Abrego, following her second-place finish via disqualification in Saturday’s $1 million Cotillion (GI) at Parx in Bensalem, Pa. … 2014 Breeders’ Cup Classic (GI) runner-up Toast of New York is slated to arrive at Churchill Downs from England early Tuesday morning, according to director of the stable area Steve Hargrave. The 7-year-old horse will quarantine for 42 hours and could train Thursday morning. He is expected to enter Saturday’s Lukas Classic (GIII) as a prep race for the Nov. 3 Breeders’ Cup Classic. 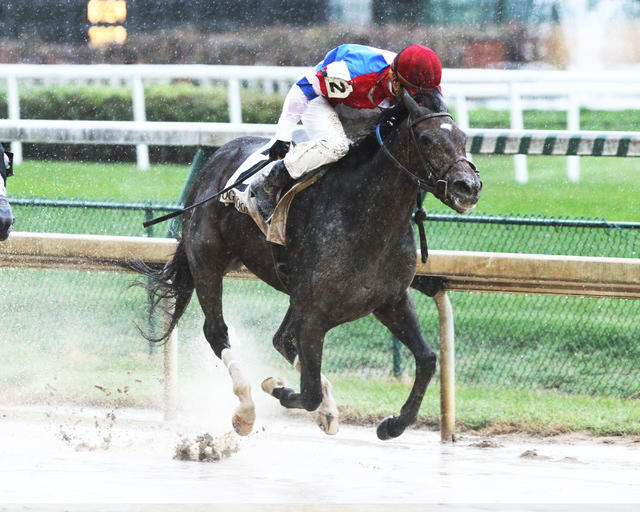