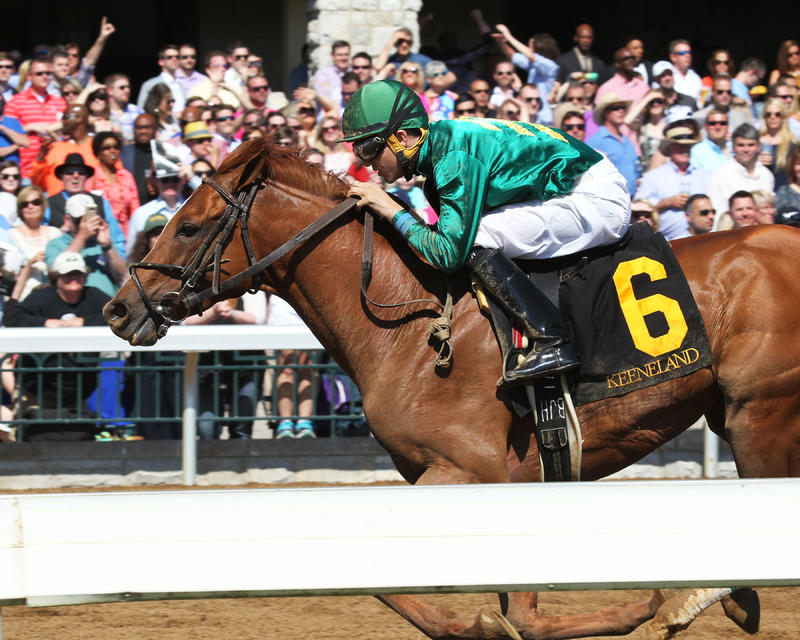 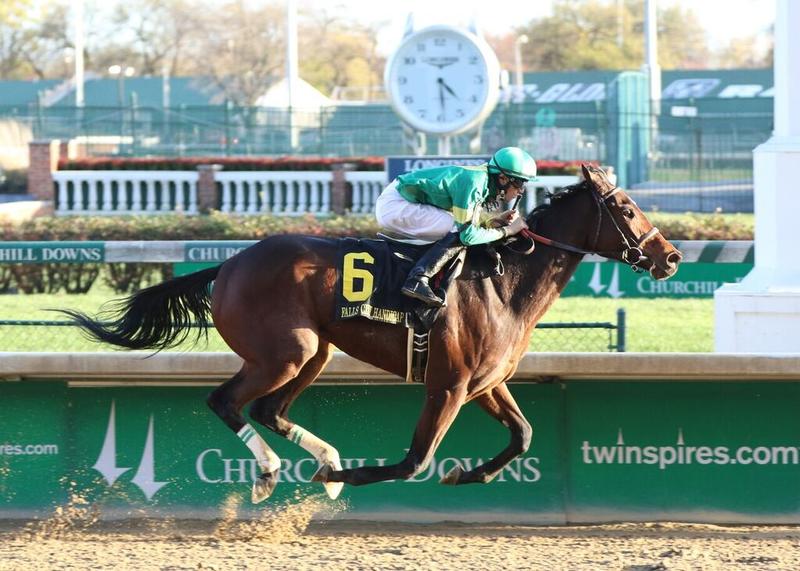 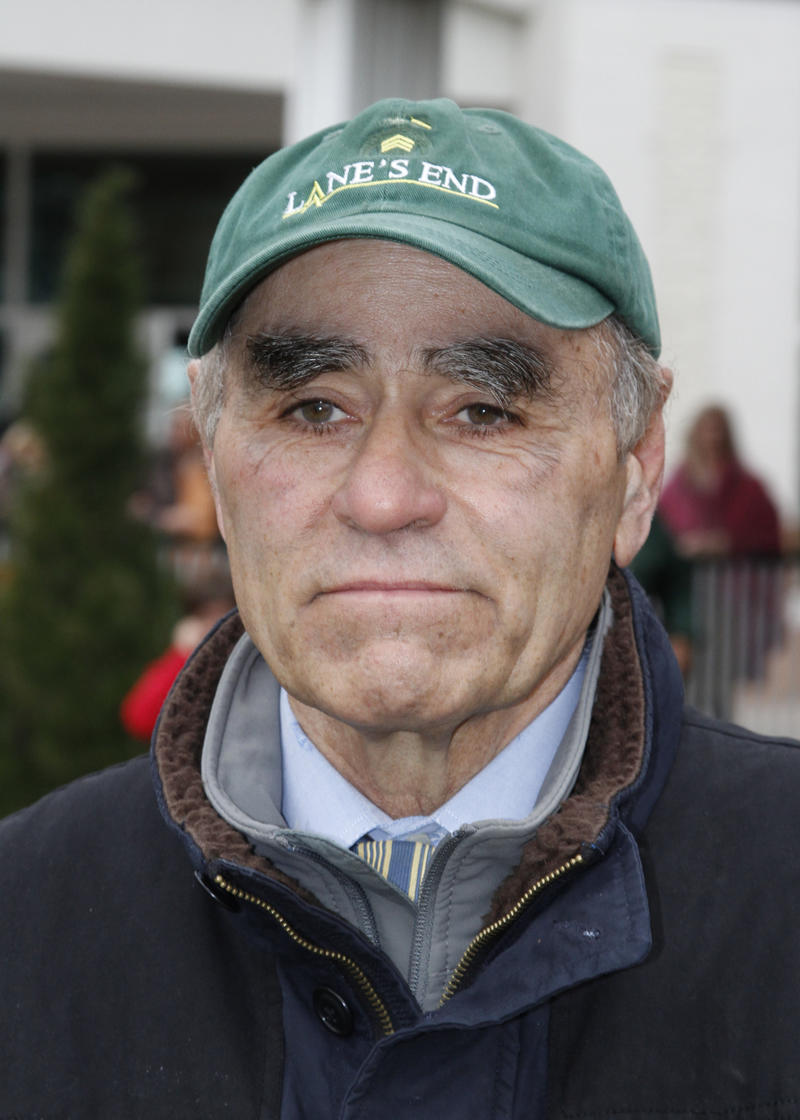 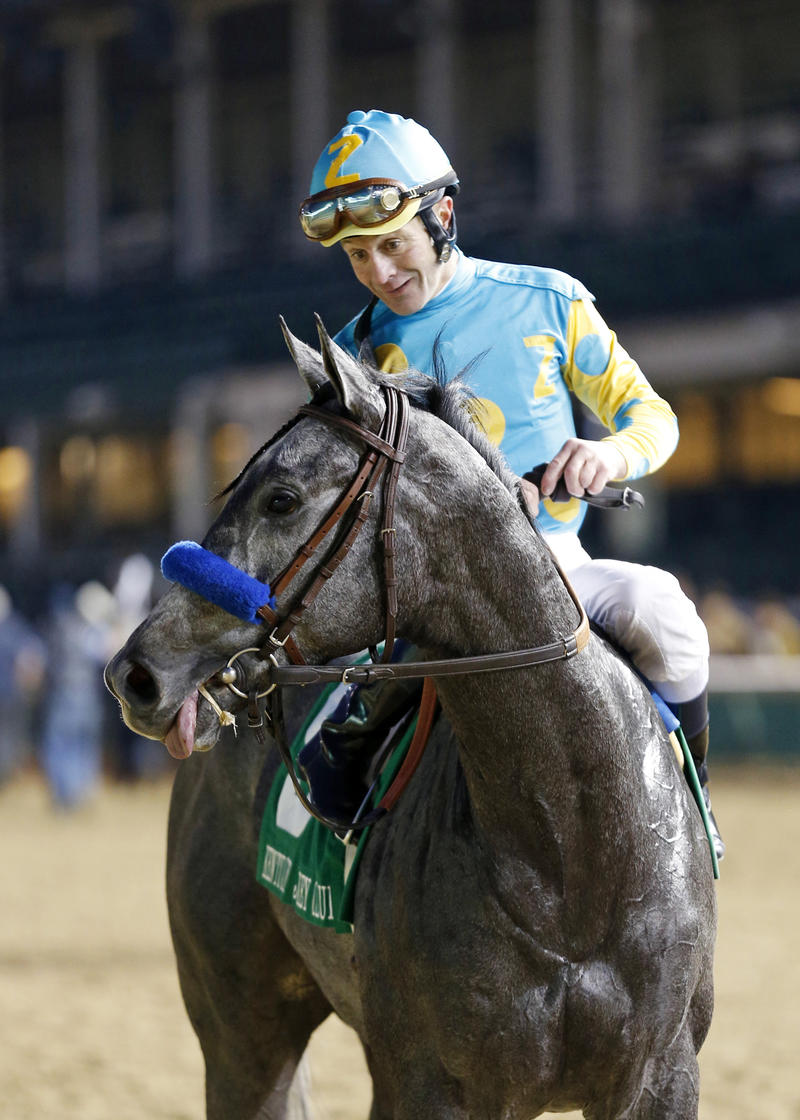 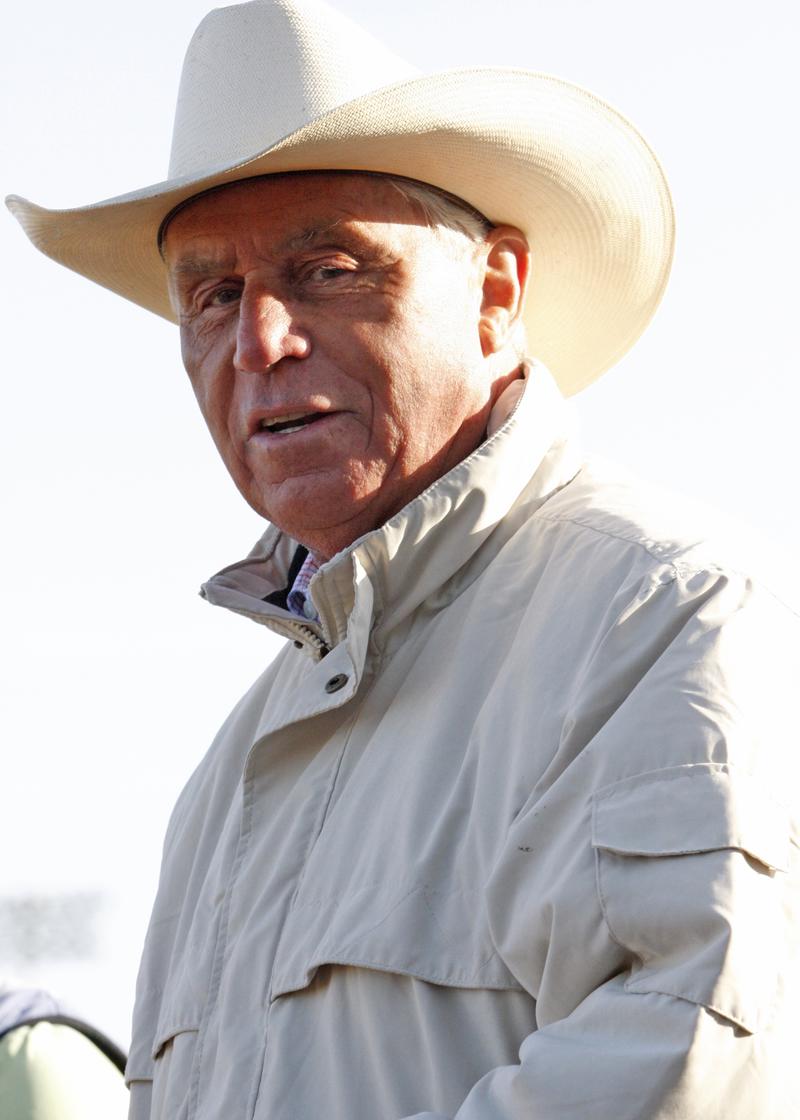 Trainer Neil Howard has enjoyed a successful year so far with graded stakes winners Eagle, who defeated multiple graded stakes winner Noble Bird in Keeneland’s Ben Ali (Grade III) on April 16, and Ahh Chocolate, a winner of the Allaire DuPont Distaff (GIII) at Pimlico on May 20. Howard will have a chance to showcase his two stakes winners on June 18 when Ahh Chocolate attempts her third grades stakes victory in the $200,000 Fleur de Lis Handicap (GII) while Eagle looks to join the Grade I club in the $500,000 Stephen Foster (GI).

“I’m confident that they’re both doing well,” Howard said. “When you go up in these big races, you always want to kind of take a wait and see approach but they both came out of their last races great and they both have been training very, very well. Eagle obviously ran here last time (second to Majestic Harbor in the Alysheba on May 6), but it’s nice for Ahh Chocolate to be able to come back here and race in her own backyard. Theogony complemented her with her win (Friday) in New York (Rags to Riches Invitational) so you always take that cautious approach but I’m very pleased with them, they’re both doing well.”

Eagle and Ahh Chocolate have run some of their better races at Churchill Downs. Aside from a 2 ½-length runner-up effort behind Majestic Harbor in the Alysheba (GII), the 4-year-old son of Candy Ride was third in the Kentucky Jockey Club (GII) as a 2-year-old and was a decisive winner of an allowance race over the Churchill main track last fall. Ahh Chocolate, also by Candy Ride, was a four-length winner of an allowance race at Churchill on Sept. 19, two starts before her first graded stakes victory in Churchill’s Falls City Handicap (GII) on Thanksgiving Day.

“You always are in a comfort zone with that,” Howard said. “But with the kind of horses that will be in these two races, they don’t necessarily have to travel with their racetrack. So I think we’re in good shape.”

Eagle’s dam, Sea Gull, is by 2003 Horse of the Year Mineshaft who was trained by Howard and won four Grade I races that year but was second to Perfect Drift in the Stephen Foster.

“The only similarities between those two are that they are both genuine in my career,” Howard said. “Other than (1990 Preakness winner) Summer Squall, there wasn’t more of a genuine horse than Mineshaft. He was the once in a lifetime horse that I was fortunate to have and Mineshaft’s demeanor was second to none. Eagle is a little bit of a different type. He’s more of a college ball player thinking that he’s all that, but he’s matured a lot. He’s got a great personality but he’s a little bit high on himself. Sometimes you have to kind of train him accordingly to keep him settled – not in a nervous way, just in a playful, good-feeling way – but he’s done well on that.

“Actually, Ahh Chocolate has more of the Mineshaft similarities in their demeanor. She’s just real professional and laid back but knows when it’s time to get her game face on. They don’t concern themselves with the things around them. They just have all of the little nuances that you look for in a good horse.”

Jockey Brian Hernandez, Jr. is the regular rider for both Howard-trained horses, and will return to the saddle for Saturday evening’s events.

“Brian’s consistency is really one of his biggest attributes,” Howard said. “He is such a professional and you can just see how he’s evolved over the years since he started and since he’s come here and he learned well, too. He’s from a family of riders. His dad was a top rider but probably one of the most well-respected riders in the country. He’s a real gentleman; he shows appreciation for the opportunities you’re giving him. We have a top-notch riding colony here and most of these riders here understand a little more than just throwing a leg over and they do take into consideration that it takes more than just getting a horse to the paddock for a maiden race. That doesn’t get spoken about enough.”

A victory for both Eagle and Ahh Chocolate would be big notches under Howard’s belt.

“It would be fantastic,” Howard said. “What the people do on these farms every day they raise these horses and their investments and then indulging you to do what you need to do. I always get the most gratification when I see these owners pleased and satisfied they are after these horses do well. That’s the biggest thing for me. They put so much into it, I can’t emphasize that enough. When people like that are nice people and trust you with their horses, no matter what, whether they’re good horses or cheap horses. When they trust you, it gives you a feeling of accomplishment too.

“Those people really appreciate what you do and that’s what it’s all about. One thing about this business is that it’s a team effort. It’s so important that people working this industry recognize who’s giving us these opportunities. I’ve been lucky working for the Stoneway people (Jim Stone and Terri Burch), the Farishs, Mr. (Cot) Campbell and all of their partners that I’ve been able to work for. I’ve been very fortunate.”

Eagle is scheduled to put in his final work for the Stephen Foster on Monday morning, while Ahh Chocolate will breeze for the last time before the Fleur de Lis on Tuesday.

“They both have been on a little bit of a different schedule because they both have run at different times,” Howard said. “Their major works are behind them, their training has been more maintaining because they’re on a nice, plain race schedule now. I hate to be cliché but it’s more or less just staying out of their way now and letting them doing their thing, make sure their eating well and watching their weight and making sure that we aren’t overtraining. You have to watch out about that sometimes.”

TERRANOVA CALLS AUDIBLE WITH EL KABEIR; WILL POINT TO STEPHEN FOSTER – Zayat Stables LLC’s El Kabeir, winner of the Kentucky Jockey Club (GII) at Churchill Downs as a 2-year-old, will return to the Louisville oval for the $500,000 Stephen Foster Handicap (GI) on June 18 after scratching out of the Metropolitan Handicap (GI) on the June 11 Belmont Stakes undercard.

“The Met Mile came up real tough with a real big field and we drew the rail,” said trainer John Terranova by phone from his New York base. “We were kind of weighing our ideas of the two races. He’s won at Churchill before and has been training well. Obviously he won the Kentucky Jockey Club there as a 2-year-old. The fact that we would be stepping up against such a large field, we felt like it was the best decision to run next week.”

Last time out, the son of Scat Daddy was a well-beaten seventh behind Takeover Target in Pimlico’s Dixie (GII) on the May 21 Preakness undercard, which was the horse’s lone start on turf.

“We were kind of kicking ourselves over that,” Terranova said “Scat Daddy babies typically do well on the turf and we figured we’d give that a shot. The turf is something we wouldn’t necessarily rule out later on down the road. He just didn’t take to the soft turf that day.”

Jockey Ricardo Santana Jr. will have the mount for Saturday evening’s race.

WEIGHTS RELEASED FOR STEPHEN FOSTER – Tri-bone Stables’ Effinex, the four-time graded stakes winner from the Jimmy Jerkens barn who won last fall’s Clark Handicap Presented by Norton Healthcare (Grade I), has been made the 122-pound high weight for next Saturday’s $500,000 Stephen Foster Handicap (GI), which will be contested over 1 1/8 miles.

The Stephen Foster Handicap for 3-year-olds and up is part of the Breeders’ Cup “Win and You’re In Classic Division” in which the winner will earn a guaranteed spot in the starting gate for the $5 million Breeders’ Cup Classic (GI) at Santa Anita on Nov. 5.

Effinex, the $2,682,950-earner who finished second to Horse of the Year and Triple Crown-winner American Pharoah in last fall’s Breeders’ Cup Classic (GI), is expected to arrive at Churchill Downs from his New York base on Sunday morning around 10:30 a.m., according to stall manager Steve Hargrave.

OTHER FOSTER SATURDAY FIELDS TAKING SHAPE – The fields for the four stakes on the Stephen Foster undercard are beginning to take shape.

LUKAS EXCITED FOR CHURCHILL DOWNS RACING CLUB 2-YEAR-OLD WARRIOR’S CLUB – Hall of Fame trainer D. Wayne Lukas is looking forward to saddling Warrior’s Club in Thursday’s third race for the newly formed Churchill Downs Racing Club, which gives racing fans a unique and low-cost perspective of what it is like to own a Thoroughbred.

“We’ll have a good fan base but we’ll see what happens,” Lukas said. “I like the idea of pulling 400 people together, as long as they’re realistic and know that we didn’t buy some half-million dollar horse and just bought a solid, nice horse. I’ve only been able talk to them when they have those mornings with coffee and doughnuts, but I just explain what we’re trying to do and give them some background as to where an owner would be and what we’re trying to accomplish here. They’ll get a good education in this process. We’ll try to share with them as much as we can and get them enthused. I think that we’ve got a pretty good chance.”

The son of Warrior’s Reward is not the only horse owned by a Churchill Downs Racing Club. Due to overwhelming popularity, a second group was formed and Lukas bought a 2-year-old daughter of Dialed In named Dial Me, who could make her career debut for the Racing Club on Friday, June 24.

“Both horses I really like a lot and they’re doing real well,” Lukas said. “Whether they’re allowance or whatever their level might be, we’ll find out over time, but these people are going to have some fun with them. I think that both horses are very effective. They’re both really good conformed horses with good minds and have both been training surprisingly really well so far.”

Hall of Fame jockey Gary Stevens has the mount aboard Warrior’s Club for Thursday’s race, which goes at 5:58 p.m. He is 15-1 on Mike Battaglia’s morning line odds.

DOWN THE STRETCH – The “Who’s the Champ? Handicapping Contest” returns Sunday. Interested participants can enter for $35 ($30 for TSC Elite members) for a chance to win the $1,000 cash voucher first prize by placing mythical $2 win and place bets on Races 3-8. Second place receives a $500 voucher and third place is worth a $200 voucher. Registration takes place between 11:30 a.m. and 1:30 p.m. on the Clubhouse second floor at the top of the Gate 17 escalators. 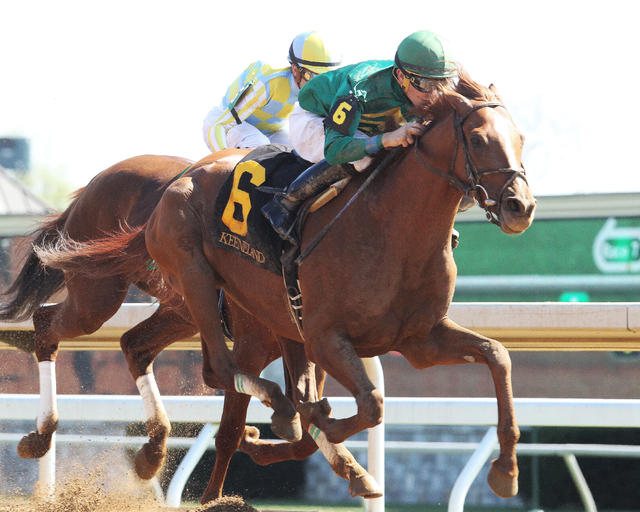