On a busy Friday morning beneath the Twin Spires at Churchill Downs, several Breeders’ Cup contenders logged their penultimate published workouts prior to the season-ending championships on Nov. 6-7 at Keeneland.

“I was just the passenger along for the ride,” said Carroll, whose father, David, is Casse’s assistant trainer. “I’ve always loved how this horse trains over the dirt. He’s very versatile and can run on dirt or turf but he’s always trained great over the dirt.”

War of Will previously finished third in the $1 million Woodbine Mile (GI) over the turf. This will be War of Will’s first dirt try since last year’s Breeders’ Cup Classic (GI) where he finished a disappointing ninth.

In the next set, the Carroll family continued their eventful morning as the matriarch of the family, Kim, worked recent $150,000 Franklin County (GIII) winner Got Stormy through splits of :11.80, :23.20 and :34.80. Got Stormy is possible to take on males in the Breeders’ Cup Turf Sprint (GI). She finished second in last year’s Breeders’ Cup Mile (GI).

It was a typical busy morning for Cox barn as he breezed his first of four Breeders’ Cup contenders at 5:30 a.m. – Godolphin’s $400,000 Breeders’ Futurity (GI) winner Essential Quality. The colt, with Florent Geroux up, started his work one length behind multiple graded stakes winner Mr. Misunderstood through splits of :13.20, :36.80, :48.80 and 1:00.60. Essential Quality finished even with Mr. Misunderstood at the wire and the duo galloped out together in 1:26.40.

“He seems like he’s really matured over the summer into where he is now,” Geroux said. “He’s one of those horses where he keeps getting better as he gets more experience.”

Geroux had the next couple of sets off from working horses for Cox but returned to the track at 7:30 a.m. to breeze Michael Dubb, Madaket Stables, Peter Deutsch, Michael Kisber and The Elkstone Group’s undefeated $150,000 Jessimine (GII) winner Aunt Pearl. The two-time winner worked outside of Kueber Racing’s $398,000 Untapable Stakes winner Emro, who had jockey Shaun Bridgmohan in the saddle. The duo worked in tandem and galloped out six furlongs in 1:13.80.

Emro, who is named after owner Rick Kueber’s daughter Emerson, broke her maiden in front-running fashion at Ellis Park prior to closing form more than seven lengths off the pace in the 6 ½-furlong Untapable.

“She’s pretty versatile she can run out front or can come from off the pace,” Kueber said. “There’s a lot of speed in the race. She’s certainly has the pedigree to run long.”

Cox will be a special guest Friday on “Inside Churchill Downs” to talk about his nine Breeders’ Cup entrants and other stable stars. The one-hour program will air at 6 p.m. on ESPN 680/105.7 in Louisville or online at www.espnlouisville.com.

“It was kind of an almost must-win situation in the Ack Ack to get him back on track,” Calhoun said. “Mentally I think it was good for him and I can tell a difference with his training. He seems happier after the race. He hasn’t had a lot go right for him this year in his races so coming into the race off a win is crucial.”

“He’s sort of been a challenging horse his entire career,” Calhoun said of the 6-year-old son of Tapit. “He’s continued to get better mentally and he’s been more consistent with age. I know it’s in him to come out of his shell.”

Following the 7:30 a.m. track renovation break, recent $500,000 Derby City Distaff (GI) winner Bell’s the One continued her march to the Filly & Mare Sprint with jockey Corey Lanerie. Per usual, Bell’s the One began her work three lengths behind stablemate Grove Daddy and worked in :25.40 and :37.20. Bell’s the One finished two lengths in front of Grove Daddy at the wire and galloped out around the clubhouse turn in 1:13.20.

“She likes to have a target in front of her, so we typically work her this way,” Pessin said. “Her race against Serengeti Empress (in the Derby City Distaff) was so thrilling. She dug in really hard that day to get up just in time.”

Saturday’s work tab at Churchill Downs is expected to include at least 13 Breeders’ Cup contenders. Below are the scheduled workers:

The 1 1/16-mile Street Sense and Rags to Riches are the co-headlining races of the 11-race kickoff of the 24-day Fall Meet. Dubbed as Stars of Tomorrow I, the afternoon will feature all 2-year-old racing. First post is 1 p.m. (all times Eastern).

Two races later, Coach will stretch out in distance for the first time in the Rags to Riches. Trained by Brad Cox, Coach recorded dominant victories at Indiana Grand breaking her maiden by 4 ¼ lengths and besting first-level allowance company by 9 ¾ lengths. The daughter of Commissioner will be ridden by Florent Geroux from post No. 8.

Inaugurated in 2005, the Stars of Tomorrow programs at Churchill Downs have helped launch the careers of more than 50 future Grade I winners including Kentucky Derby winner Super Saver, Kentucky Oaks winners Rachel Alexandra, Believe You Can and Monomoy Girl and Preakness (GI) winner Swiss Skydiver.

A total of 104 horses were entered in the body of Sunday’s card for an average of 9.45 horses per race.

Sunday’s National Weather Service forecast calls for cloudy conditions with highs in the high 60s. The rail on the Matt Winn Turf Course will be set in Lane 2, 15 ft. off the inside hedge.

CHURCHILL DOWNS WELCOMES BACK FANS FOR FALL MEET – Sunday’s Fall Meet opener will mark the first time this year that spectators can return to Churchill Downs for live racing. Churchill Downs will continue to follow the COVID-19 health and safety protocols for Venues and Events as mandated by the Commonwealth of Kentucky. Last year’s average daily attendance during the Fall Meet was 4,200 guests, and less spectators are expected this year. Reserved outdoor box seats as well as select indoor premium areas will be open with proper social distancing at limited capacity per the state’s requirements for venues and event spaces.

To facilitate a safe and enjoyable experience, there will be no general admission at the Fall Meet but first floor reserved box seats will be sold at general admission pricing for $5 ($7 on Nov. 27-28). Third floor box seats are $12. Dining options are $39 ($72 on Thanksgiving Day and $49 on Nov. 27-28). Tickets may be purchased online at https://www.churchilldowns.com/tickets/. Children 12 and under are admitted free when accompanied by an adult. Parking is available free of charge on a first-come, first-served basis.

Temperature checks, medical questionnaires, physical distancing and mandatory face coverings will be required upon entrance and movement within Churchill Downs. An inherent risk of exposure to COVID-19 exists in any public place where people are present.

More information on Churchill Downs’ COVID-19 health and safety guidelines can be found online at https://www.churchilldowns.com/tickets/admissions-services/updates.

Churchill Downs Racing to Air on FS1/FS2 – The racing action from Churchill Downs Racetrack throughout the Fall Meet will be broadcast on FOX Sports’ “America’s Day at the Races,” which will air every race day on either FS1 or FS2. Produced by the New York Racing Association, Inc. (NYRA) in partnership with FOX Sports, “America’s Day at the Races” is the acclaimed national telecast presenting coverage and analysis of the best racing from around the country. Sunday’s opener at Churchill Downs will air on FS2 from 12:30-2 p.m. and 3-6 p.m. (no racing from 2-3 p.m. but programming will air from 12:30-6 p.m. on MSG+).

DOWN THE STRETCH – Churchill Downs will offer handicappers free Brisnet past performances each day. Horseplayers can visit www.churchilldowns.com/racing-handicapping/handicapping/expert-picks for complementary Brisnet past performances along with daily expert selections from Ed DeRosa, Joe Kristufek and Scott Shapiro of TwinSpires.com and several other handicapping tips including workouts of the day from expert clocker Bruno DeJulio. … For more information and to purchase tickets for the Fall Meet, visit www.churchilldowns.com 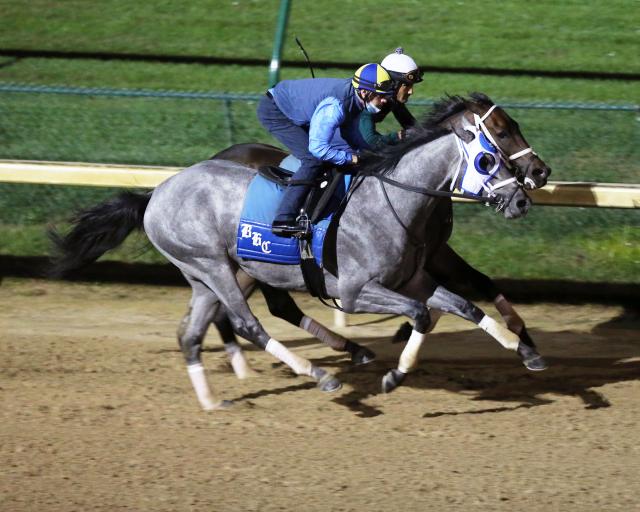