Zayat Stables LLC’s Indiana Oaks (Grade II) runner-up Emmzy landed the outside post in a field of eight 3-year-old fillies as she attempts to land her first stakes victory in Saturday night’s 41st running of the $100,000 Dogwood Stakes Presented by GE Appliances (listed) – the featured seven-furlong event at Churchill Downs during a special Downs After Dark nighttime racing program.

The 11-race evening program – the final nighttime card at Churchill Downs this year – also will include a marquee race for purebred Arabians: the $100,000 President of the United Arab Emirates Cup Sponsored by the Abu Dhabi Sports Council, a Grade I event over 1 ¼ miles for 3-years-old and up.

Emmzy, who was transferred from Hall of Fame trainer Bob Baffert to the care of locally-based high-percentage horseman Brad Cox earlier this month, could vie for favoritism in a competitive group of 3-year-old fillies.

Emmzy (7-2-2-0—$126,861) will cut back in distance after running second to Family Tree in the $203,200 Indiana Oaks (GII) over 1 1/16 miles at Indiana Grand on July 16. The daughter of Eskendereya pressed the pace in the early stages of the Indiana Oaks and made a bid for the lead after six furlongs in 1:14.62. Emmzy and Family Tree broke clear of the field at the top of the stretch, but Family Tree, the winner of the Iowa Oaks (GIII) two weeks earlier, pulled away at the eighth pole and stopped the teletimer in 1:44.46.

Following the race, Emmzy returned to California, but she was shipped to Kentucky in early September and has recorded a pair of workouts for Cox at Churchill Downs.

G. Watts Humphrey Jr.’s homebred Mines and Magic (6-2-1-1—$103,806) tried the $301,725 Del Mar Oaks (GI) in her last start on Aug. 20. She finished seventh, beaten 3 ¼ lengths, that day in her turf debut. Previously, the Vicki Oliver trainee rallied for third in the Indiana Oaks after being bottled up behind the leaders until the top of the stretch. She shook loose late and closed to finish 3 ¼ lengths back of runner-up Emmzy.

Paul and Philip Tackett’s homebred Saharan (6-2-0-0—$113,350) will invade from New York in an attempt to land her first stakes victory fresh off a two-length win in a swift first-level allowance at Saratoga on Aug. 28. The daughter of Desert Party is trained by Jimmy Jerkens, who successfully raided the $500,000 Clark Handicap Presented by Norton Healthcare (GI) at Churchill Downs last fall.

Joe Ragsdale’s Marquee Miss (12-3-0-1—$195,059) and Magdalena Racing and Chris Sterbenz’s Wonderment (9-3-0-2—$199,910) hope to regain the form that saw them win stakes races earlier this year. The Ingrid Mason-trained Marquee Miss won the $100,000 Dixie Belle and $100,000 Martha Washington this winter at Oaklawn Park. Wonderment, a New York-bred campaigned by Kenny McPeek, scored a front-running victory in the $100,000 Bourbonette Oaks (GIII) over the Polytrack at Turfway Park in early April.

The race after the Dogwood is the $100,000 President of the UAE Cup (GI), which will be run beneath Churchill Downs’ Twin Spires for a fourth time and the first time since 2014.

Presented by Stella Artois and Woodford Reserve, the theme for the lone Downs After Downs event at the 11-date September Meet is “Bourbon, Bets & Bow Ties.” The evening is an opportunity to celebrate the best of the south including bourbon, Thoroughbred racing and fashion. Track officials plan to infuse a contemporary, yet timeless Southern style into everything from food to music and décor.

An outstanding doubleheader of musical entertainment on the Plaza stage will be provided by Kentucky-born cellist and composer Ben Sollee (7:15-9 p.m.) and the incredibly-popular Louisville group Linkin’ Bridge (9:30-10:45 p.m.), who recently was a Top 10 finalist on the television series America’s Got Talent.

Admission gates open Saturday at 5 p.m. and the final race of the evening is scheduled for 11:10 p.m. General admission is $10 and reserved seat packages start at $25, which are available for purchase on www.ChurchillDowns.com. 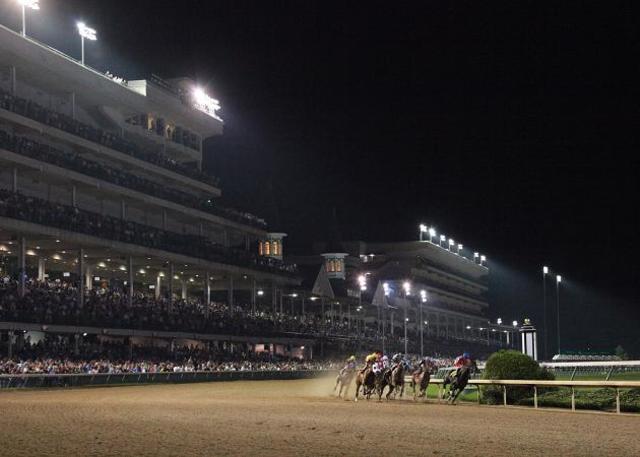