Paul Lichtefeld and Jack Stewart’s Engaginglee collected her first stakes victory with a determined head victory over Miss Pink Diva in Saturday’s 33rd running of the $100,000 Locust Grove Presented by TwinSpires.com (Grade III) for fillies and mares at Churchill Downs.

Trained by Dale Romans and ridden by Luis Saez, Engaginglee covered the 1 1/16 miles on a muddy main track in 1:46.24. Odds-on 3-5 favorite Ahh Chocolate struggled over the surface and finished last.

Innovative Idea led the field of six distaffers through fractions of :24.93, :49.32 and 1:13.75 with Engaginglee racing comfortably in last during the early stages of the two-turn race. On the far turn, Engaginglee began to pass rivals from the outside and drew even with Miss Pink Diva, who poked her head in front at the top of the stretch. Engaginglee kicked on well and was fully extended to narrowly prevail.

“It was a great trip,” Saez said. “She was coming from behind. She broke well and we saved ground and when I asked her she responded very well. I had a little more left, she was hanging a little bit but she battled back and fought very well.”

The victory was worth $61,380 to Engaginglee and increased her earnings to $313,620 with a record of 23-4-6-4. It was the first graded stakes victory for the 5-year-old Kentucky-bred daughter of 2000 Kentucky Derby winner Fusaichi Pegasus out of the Fit to Fight mare Lee Gage.

Sweetgrass finished another 1 ¼ lengths back in fourth and was followed in order by Romantic Vision and Ahh Chocolate.

“Our filly just didn’t show up today is the best way to put it,” said Ahh Chocolate’s rider Brian Hernandez Jr. “It’s a part of the game.”

DALE ROMANS, trainer of ENGAGINGLEE (winner): “She was coming into the race in real good shape. I thought that she was on the verge of a break through race. She deserved to be a graded stakes winner and now she got it. I have no explanation for the performance at Ellis (Park) but it’s good to make her a graded stakes winner now. She and I have one thing in common and that’s that we both love Churchill Downs.”

LUIS SAEZ, jockey of ENGAGINGLEE (winner): “It was a great trip. She was coming from behind. She broke well and we saved ground and when I asked her she responded very well. I had a little more left, she was hanging a little bit but she battled back and fought very well.”

SHAUN BRIDGMOHAN, jockey of MISS PINK DIVA (runner-up): “She tried hard. She gave me a good gallant effort and I am very proud of her. She tried the whole way.”

BRIAN HERNANDEZ, JR., jockey of AHH CHOCOLATE (sixth as the 3-5 favorite): “Our filly just didn’t show up today is the best way to put it. It’s a part of the game.” 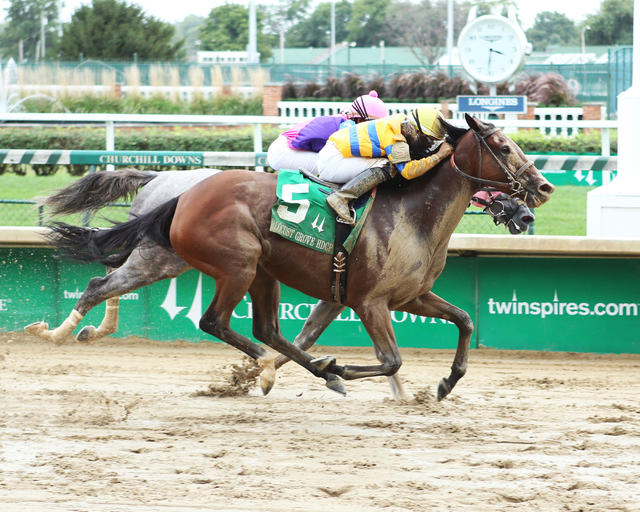