Claiborne Farm and Adele Dilschneider are hoping their improving homebred Sprawl can score his first stakes victory in Saturday’s $150,000 Blame Stakes at Churchill Downs, a race named in honor of his owners’ prized stallion Blame.

“I’m very thankful to train a horse like this who has such a high quality pedigree and is owned and bred by one of the most historic farms in the world,” trainer Tom Drury Jr. said.

Sprawl, a 4-year-old son of City Zip, was made the 3-1 co-second choice on the morning line in Saturday’s 1 1/8-mile Blame Stakes. He’ll be making his 14th-career start and fourth start since being transferred from trainer Bill Mott to Drury.

“We were very impressed with how well he won in his last start,” Drury said. “The timing from that allowance race set up perfectly to try him in stakes company again. Hopefully he can repeat his allowance win on Saturday.”

Sprawl recorded his third career victory May 9 at Churchill Downs with a front-running 7 ¼-length win in a 1 1/16-mile conditioned allowance event. The chestnut colt tried stakes company four times while in the care of Mott and recently finished fourth by three-quarters of a length in the $150,000 Ben Ali (Grade III) at Keeneland where he was defeated by fellow Blame rivals Silver Dust and Night Ops.

Churchill Downs’ admission gates will open at 11:30 a.m. and tickets, starting at $5, are available on www.ChurchillDowns.com/tickets. For those outside the Louisville area, all 11 races are scheduled to be televised on Fox Sports 2 from 12:30-6 p.m. Fans can also watch the live simulcast feed and wager on www.TwinSpires.com, the official ADW of Churchill Downs Incorporated.

MANDATORY 20-CENT DERBY CITY 6 PAYOUT SLATED FOR SATURDAY – There will be a mandatory payout in the 20-cent Derby City 6 on Saturday at Churchill Downs with all monies distributed to ticket holders with the most winners in the six-race series.

The jackpot carryover was $97,749 at the start of Friday’s nine-race card, and provided there are no single ticket winners Friday, track officials estimate the force-out of Saturday’s total Derby City 6 pool to eclipse $500,000 with new money.

LANDEROS HOPING FOR STAKES SUCCESS SATURDAY AT CHURCHILL DOWNS – Jockey Chris Landeros has two stakes mounts in Saturday’s Stephen Foster Preview Day at Churchill Downs and is hoping to make the best of them with “live chances” in the $150,000 Audubon and $150,000 Regret (Grade III).

“Oyster Box seems pretty tactical in her previous races. She closed well to finish third (in the Grade III Florida Oaks) and I think fits this field very well.”

Like the King was made second choice at 7-2 on the morning line odds for the Audubon while Oyster Box was tabbed at 6-1.

DOWN THE STRETCH – Racing continued Friday with a first post of 12:45 p.m. The races were taken off the turf due to rain showers in the Louisville area Friday morning. … There was a $97,749 carryover in the 20-cent Derby City 6 which spanned races 4-9. … There will be a special holiday racing program on Memorial Day Monday at Churchill Downs. First post is 12:45 p.m. for the scheduled nine-race card. Entries were taken Friday. … Godolphin’s Belmont Stakes (GI) likely favorite Essential Quality is scheduled to breeze at 5:30 a.m. Saturday morning prior to shipping to Belmont Park for the June 5 race. … “Inside Churchill Downs” will air Friday at 6 p.m. on ESPN 680/105.7. The one-hour radio program will get fans ready for Saturday’s Stephen Foster Preview Day at Churchill Downs with clocker John Nichols. Those outside the Louisville market can listen live on www.espnlouisville.com. ... For more information and to purchase tickets for the Spring Meet, visit www.churchilldowns.com. 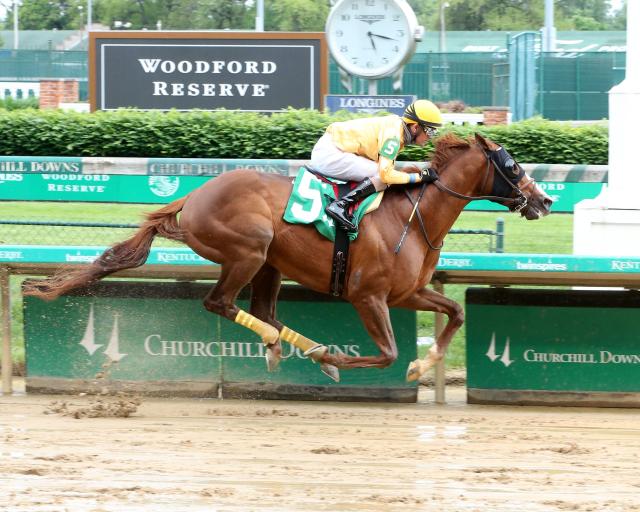