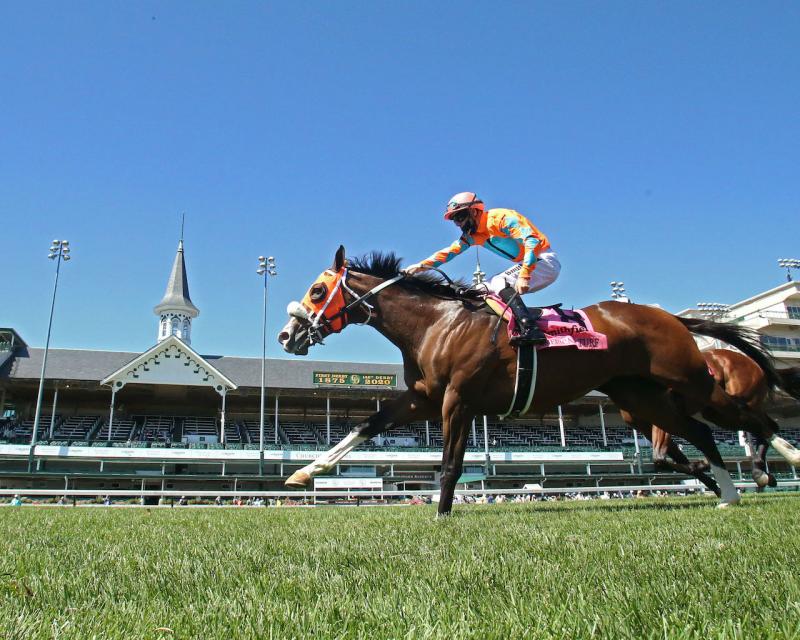 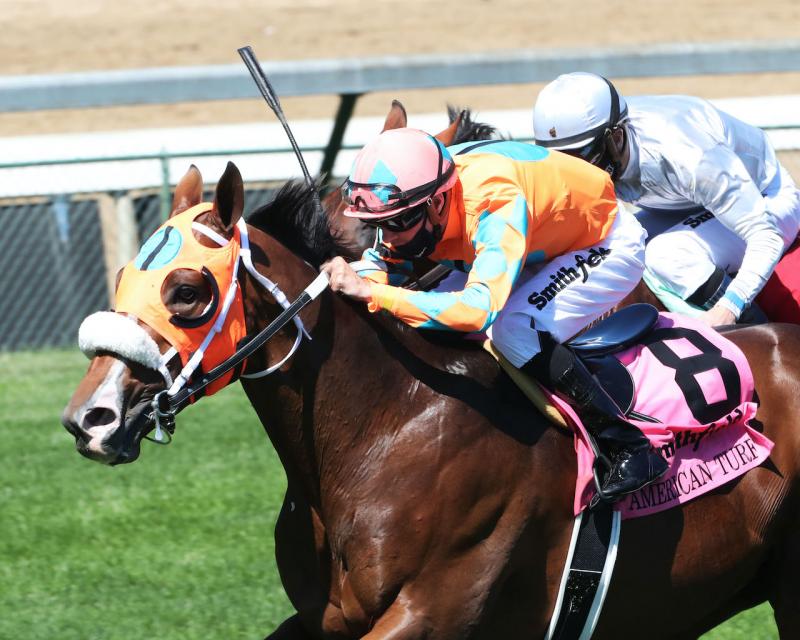 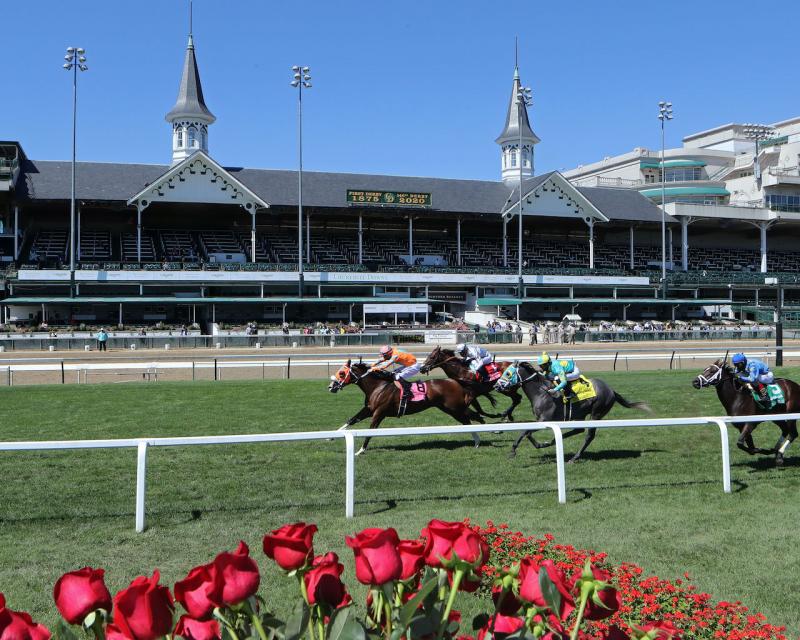 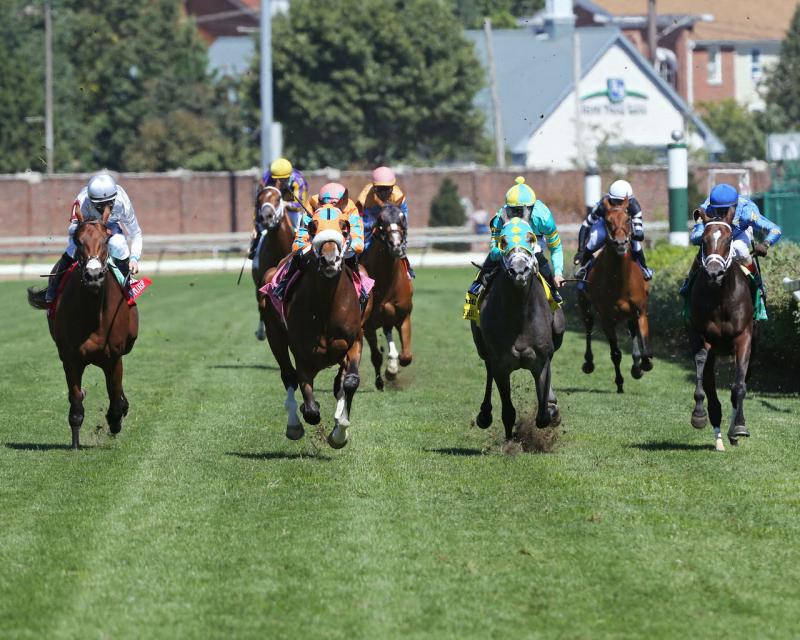 LOUISVILLE, KY (Saturday, Sept. 5, 2020) – Skychai Racing and Sand Dollar Stable’s Fancy Liquor rallied from far off a fast pace and then held off Taishan by a half-length to win the 29th running of the $500,000 American Turf (Presented by Smithfield (GII) for 3-year-olds.

Trained by Mike Maker and ridden by Florent Geroux, Fancy Liquor covered the 1 1/16 miles on a firm Matt Winn Turf Course in 1:42.83.

American Butterfly, Sugoi and Smooth Like Strait engaged in a duel through fractions of :23.04 and :46.48 with Fancy Liquor racing in fifth. On the far turn, Smooth Like Strait assumed the lead with Field Pass quickly taking up the chase and drawing even at the head of the stretch.

Those two dueled on even terms until the sixteenth pole when Fancy Liquor moved past the leaders on the outside and had enough to fend off Taishan.

The victory was worth $303,800 and improved Fancy Liquor’s earnings to $465,050 with a record of 6-3-1-2. It is the first graded stakes victory for Fancy Liquor, a Kentucky-bred son of Lookin At Lucky out of the Secret Romeo mare Brandys Secret.

It was another 2 ¼ lengths back to favored Smooth Like Strait with King Theo, Sugoi and American Butterfly following in order.

Florent Geroux (winning rider, Fancy Liquor) -- “This horse seems to be still learning. He broke really well but the horses in front of me were going really fast. He’s shown in the past he’s run well on the lead but he doesn’t necessarily have to have the lead. The race I rode aboard him at Keeneland (the Grade III Transylvania) he came from just off the pace and we got beat by Field Pass that day but I know (Fancy Liquor) was still learning and getting better. Even back in the Jeff Ruby Steaks, where he beat us there, too, (Fancy Liquor) ran a really solid race.”

Mike Maker (winning trainer, Fancy Liquor) -- “I wasn’t expecting what we got, but it worked out. So I’m very pleased. Field Pass is a stakes winner over this course and didn’t quite run his race at Saratoga. Tyler (Gaffalione) didn’t feel like he handled the softer going today but still ran a good race. Flo said he was loaded, on the gallop out and everything.”

Dr. Harvey Diamond (co-managing partner Skychai Racing) on finally beating stablemate Field Pass: “The day we finished third to Field Pass in the Jeff Ruby, I knew that we’d beat him one of these times and we picked the right time to do it: Home track in front of my friends. All three of them.”

Julien Leparoux (rider, Taishan, second) -- “They me wanted to get position (near the lead) but they were rolling in front so we went to Plan B. I laid off inside nicely and made one run. He ran a big race, first time on the grass, he handled it perfectly. He’s a nice horse. He’s been working very good in the morning and I’m very happy with the way he ran today.” 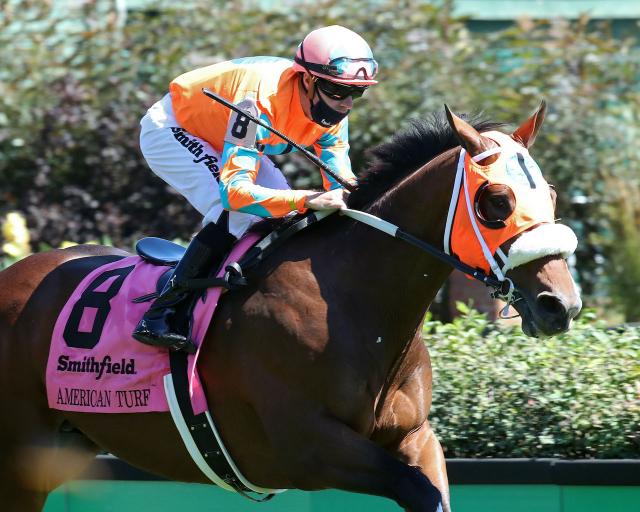