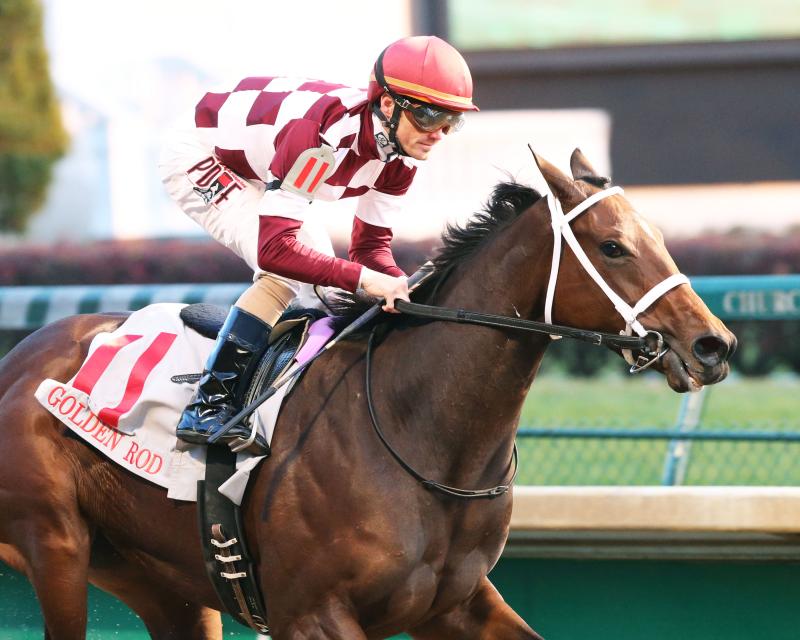 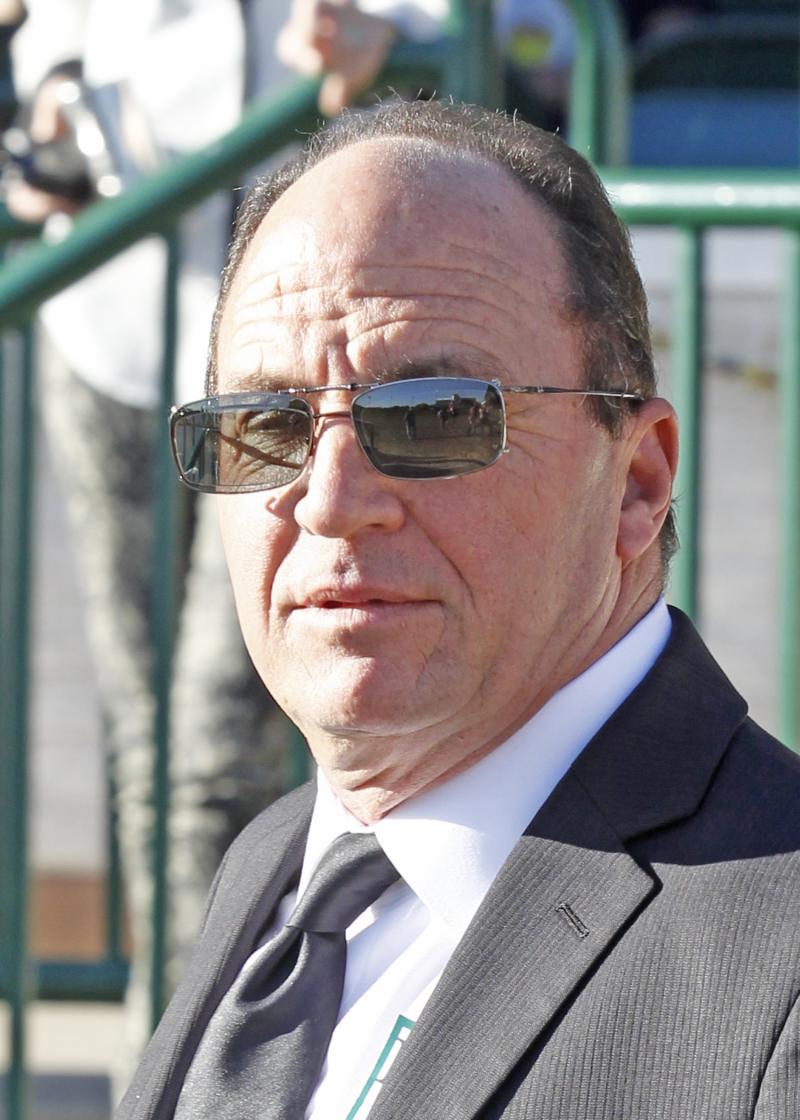 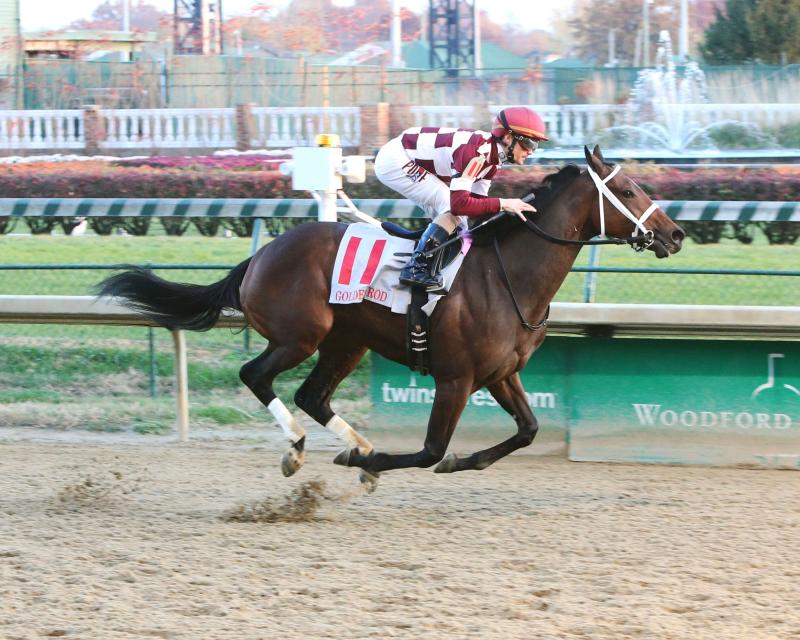 Farrell and jockey Channing Hill were all alone near the finish in a six-length victory over favored Daddys Lil Darling in the 73rd running of the $200,000 Golden Rod Stakes (GII). (Coady Photography, Churchill Downs) 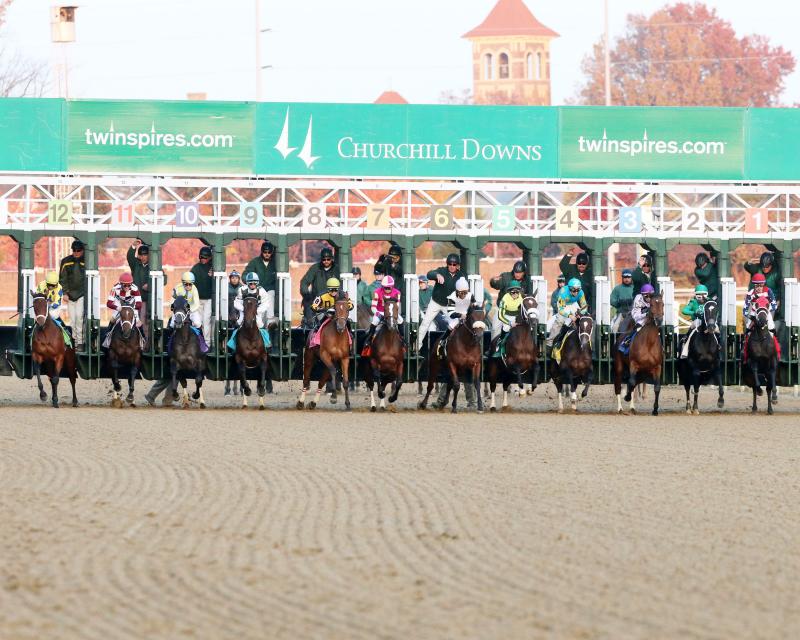 Farrell (red cap and red and white silks) broke well from post 11 and quickly assumed a lead she would not relinquish in Saturday's $200,000 Golden Rod (GII) for 2-year-old fillies at Churchill Downs. (Coady Photography, Churchill Downs)

Coffeepot Stables’ homebred Farrell took command shortly after the start and led every step of the way to easily win Saturday’s 73rd running of the $200,000 Golden Rod (GII) at Churchill Downs by six lengths over 5-2 favorite Daddys Lil Darling.

Channing Hill rode the winner for his father-in-law trainer Wayne Catalano, who won the Golden Rod for the second time in three years. He saddled West Coast Belle to victory in 2014.

Farrell, who broke her maiden at Churchill Downs on Oct. 1 and returned to finish third in the $82,340 Rags to Riches Overnight Stakes on Oct. 30, got away from the starting gate in good order from post 11 and asserted herself around the first turn. She led Rags to Riches winner Lovely Bernadette by 1 ½ lengths after a first quarter mile in :23.89 and the half in :48.33.

After six furlongs in 1:13.80, Lovely Bernadette came within a length at the head of the stretch but Farrell saved her best running for the stretch as she drew off for the comfortable victory. Daddys Lil Darling, the Pocahontas (Grade II) winner who was runner-up in the Alcibiades (GI) and fourth in the Breeders’ Cup Juvenile Fillies (GI), had three rivals beaten down the backstretch but rallied for the place by a neck over Ever So Clever.

Gris Gris was another 1 ¼ lengths back in fourth and was followed by Lovely Bernadette, China Grove, Dream Dancing, Dance Proposal, My Sweet Stella, Someday Soon, Funny Holiday and Fun.

Farrell, a daughter of Malibu Moon out of the Unbridled’s Song mare Rebridled Dreams, was bred in Kentucky by her owners.

“The Rags to Riches was the stepping stone to here and she ran well, but we really, really loved her going into today’s race,” Catalano said. “She trained great, got the race over the track. Everything was beautiful. She’ll probably go to Fair Grounds for the winter.”

WAYNE CATALANO, trainer of FARRELL (winner): “She trained very, very well for the last couple of weeks and she had a race over the track and had run very well and we wanted our best performance today. She’s run some big races but her best one was waiting for today and she showed up with it. We’ll sit down with the owners and get there (Longines Kentucky Oaks) in the best way that we know how. The Rags to Riches was the stepping stone to here and she ran well, but we really, really loved her going into today’s race. She trained great, got the race over the track. Everything was beautiful. She’ll probably go to Fair Grounds for the winter. I’ll see what’s the best route to go. I’ll map it out with owners and talk to those guys. We’ll sit down and make a plan and see what the best way to get to that race is.”

CHANNING HILL, jockey of FARRELL (winner): “It’s an easy ride when you’re on much the best and have everything your way and obviously the horse got squeezed a little bit going into the first turn, but she had everything else her own way and she was relaxed. (Trainer) Wayne (Catalano) had her on point and ready to roll. The biggest thing was that she settled into the turn and on the backside and from there, it was going to be tough to catch her. She’s got a lot of quality to her. She’s going to be tough wherever she goes this winter.”

KENNY McPEEK, trainer of DADDYS LIL DARLING (runner-up): “She ran good. Once again the post position was tricky, but nobody was going to beat Wayne’s (trainer Wayne Catalano) filly the way she ran. She ran huge.”

COREY LANERIE, jockey on DADDY LIL DARLING (runner-up): “We had a little bit of trouble, but with a clean trip I don’t know if I could catch the winner. He looked like he (jockey Channing Hill) had things his way from where I was. I just wish I could draw an inside post with this filly because she has just enough speed where if I try to be closer I thing going to be hung out in the parking lot, and I’ll be mad at myself for getting beat there. So I’ve got to worry about saving ground in the first turn and she gives up a few lengths. But she was awesome to ride today – she was like driving a car through the holes. She’s a good horse.”

RICARDO SANTANA JR., jockey on EVER SO CLEVER (third): “She ran good. I’m very proud of her. She always tries hard and is a really nice filly. She got a little tired in the end and that’s why we lost second. But I have a lot of confidence in that filly for the future.”

Q: She was well back early, did you have any traffic problems? “No, she had a beautiful trip.”