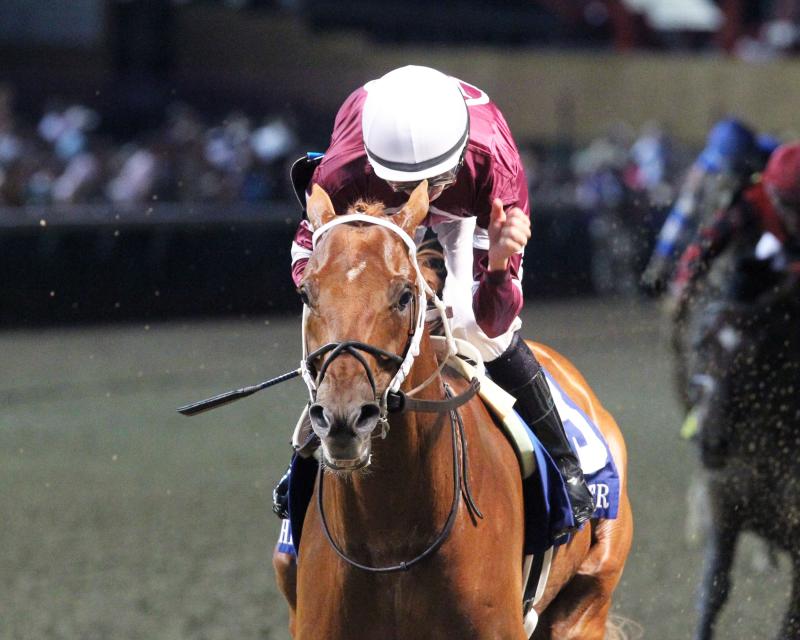 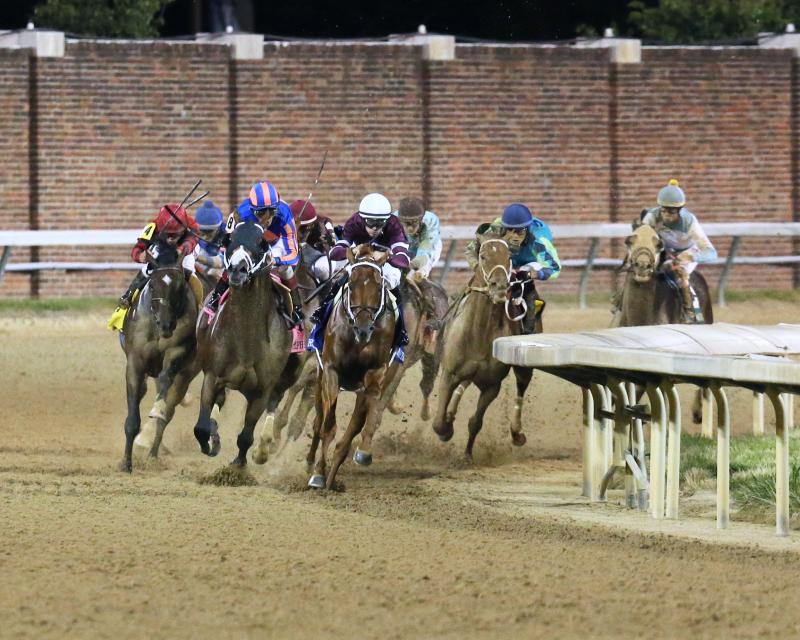 Heavily-favored Gun Runner turned for home on the lead and extended his advantage under jockey Florent Geroux on the Steve Asmussen-trained colt's record seven-length victory in the 36th running of the $500,000 Stephen Foster Handicap (GI). (Coady Photography, Churchill Downs) 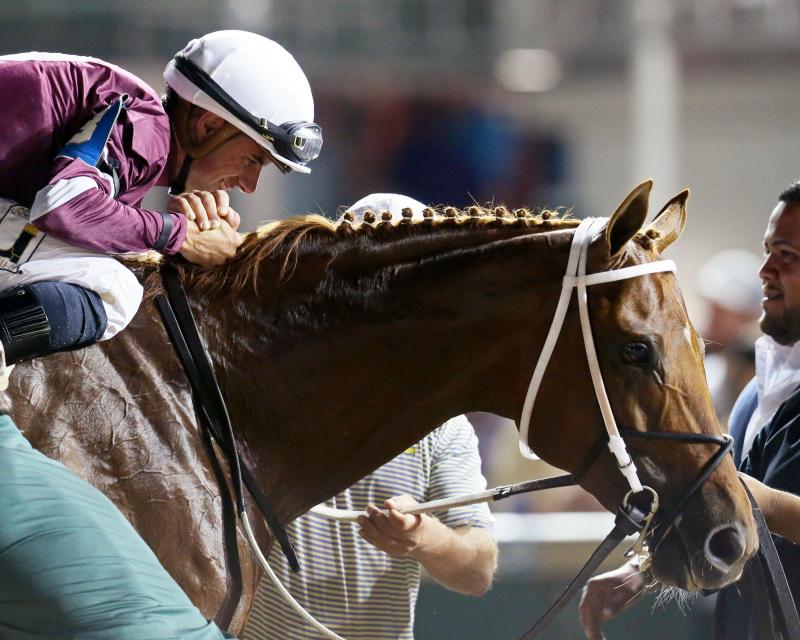 Winchell Thoroughbreds LLC and Three Chimneys Farm’s heavily-favored Gun Runner took the lead shortly after the start, shook off a brief challenge from Stanford on the far turn and drew away easily under jockey Florent Geroux through the homestretch for an easy seven-length victory before crowd of 20,669 in Saturday’s 36th running of the $500,000, Grade I Stephen Foster Handicap President by GE Appliances at Churchill Downs.

The 4-year-old son of Candy Ride (ARG), saddled by Hall of Fame trainer Steve Asmussen, won for the third time in his last four races and the Stephen Foster victory secured the colt a starting spot in the $6 million Breeders’ Cup Classic (GI) at California’s Del Mar Race Course on Nov. 4. The race was part of the Breeders’ Cup “Win & You’re In Classic Division” series of races, which awards winners of its races an automatic berth in Breeders’ Cup Classic along with traveling expenses for the journey to Southern California.

Gun Runner covered the Stephen Foster’s 1 1/8-mile distance in 1:47.56 – the fifth-fastest running of the Stephen Foster. The colt’s victory margin was a record and eclipsed Street Cry (IRE), a winner of the Dubai World Cup in his previous start, who won the 2002 Foster by 6 ½ lengths.

Gun Runner has emerged as one of the leading Thoroughbreds in the world and entered the Stephen Foster tied for fourth in the Longines World’s Best Racehorse rankings. His only loss in his last four races was a runner-up finish to 2016 Breeders’ Cup Classic winner Arragoate, the top-ranked horse in the world, in the $10 million Dubai World Cup (Group 1) in his previous start at Dubai’s Meydan Racecourse on March 25.

Gun Runner paid $3, $2.40 and $1.10 as the odds-on favorite in the overmatched field of seven rivals. Honorable Duty rallied to finish second under jockey Javier Castellano and returned $4 and $2.60. It was 1 ¼ lengths back to Breaking Lucky, who finished third under Luis Contreras and paid $3 to show. Hawaakom, a 45-1 longshot ridden by Miguel Mena, finished 1 ½-lengths farther back in fourth.

“It’s special to win a Grade I but now we have our ticket punched to the Breeders’ Cup,” said Asmussen, who previously won the Stephen Foster with Horse of the Year Curlin in 2008. “We got him to the Winner’s Circle here at home and we set ourselves up for a great second-half campaign. I can’t thank our owners enough. This horse is incredibly special in so many ways.”

After easily moving to the early lead from his No. 3 post position, Gun Runner cruised under Geroux through early fractions of :23.59 for the quarter, :47.23 for a half-mile and six furlongs in 1:10.69. Stanford was in close pursuit down the backstretch and jockey John Velazquez moved that rival toward the leader heading into the far turn, but Gun Runner shook off that challenge and any suspense regarding the winner of the Stephen Foster quickly evaporated as the heavy favorite easily pulled away to his impressive victory.

Stanford finished fifth in the Stephen Foster, and was followed past the finish line by Texas Chrome, Mo Tom and Bird Song.

Gun Runner, who impressively beat a powerful group of accomplished older rivals in last fall’s $500,000 Clark Handicap Presented by Norton Healthcare (GI) at Churchill Downs became the fourth horse to will win the Clark and returned to win next spring’s Stephen Foster. The others are No Marker (1989-90), Saint Liam (2004-05) and Blame (2009-10).

FLORENT GEROUX, jockey of GUN RUNNER (winner): “I was loaded the entire trip around there. He was doing everything so easily. This horse is truly unbelievable. He’s one of the best horses I’ve ever ridden and to put forward this type of effort after running in Dubai is so impressive. I was a bit surprised to find myself on a lone-lead but I wasn’t complaining one bit. What a horse.”

STEVE ASMUSSEN, trainer of GUN RUNNER (winner): “I think it was key taking our time with this horse. We always thought he would get better with age and he’s proving that to us right now. It’s special to win a Grade I but now we have our ticket punched to the Breeders’ Cup. We got him to the Winner’s Circle here at home and we set ourselves up for a great second-half campaign. I can’t thank our owners enough. This horse is incredibly special in so many ways.”

JAVIER CASTELLANO, jockey of HONORABLE DUTY (second): “Second best today. The winner, I give a lot of credit. He was much the best horse in the race. Unfortunately, not much speed in the race. I thought about it before the race, the way I handicapped the race, a little more speed, I thought Stanford was gonna go and the other horse inside (Bird Song) was going to go. They let him (Gun Runner) dictate the pace, nice comfortable rhythm, nice comfortable pace. I think it didn’t help when my horse is coming from behind. I think it cost a little bit of the race.”

BRENDAN WALSH, trainer of HONORABLE DUTY (second): “Super. Can’t be disappointed. He ran great. Looks like he probably stepped up again. I mean what can I say? He’s just turned into a great horse.”

Next?: “I don’t know. We’ll see how he comes out of it. But you know he's a good horse and we'll pick a spot I think we can win a real nice race with him before the end of the year.”

LUIS CONTRERAS, jockey of BREAKING LUCKY (third): “He always runs such a hard race. I thought we could’ve run second but we ran into some trouble in the stretch. I’m still proud of how well he ran.”

READE BAKER, trainer of BREAKING LUCKY (third): “We had a troubled trip down the lane, I’m not sure who exactly who got us in trouble but with a clearer trip I think we could’ve ran second. There was no catching the winner today.”

LUIS CONTRERAS, jockey of BREAKING LUCKY (third): “I was hoping to get second at the end.”

TODD PLETCHER, trainer of STANFORD (fifth): “We had no excuse. We tried to follow the winner around there, put a little pressure on him. Just couldn't fire with him.” 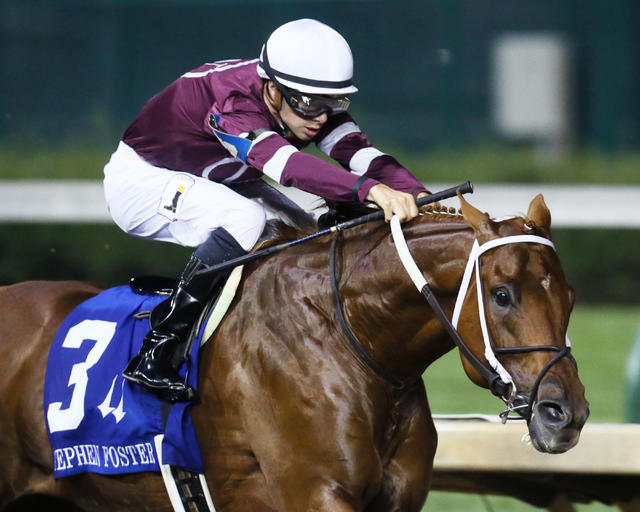