LOUISVILLE, Ky. (Friday, May 4, 2018) – William and Corinne Heligbrodt, Heider Family Stables and Madaket Stables’ Mia Mischief fought off an early test from Amy’s Challenge and then held off a late bid from Talk Veuve to Me by 1 ¾ lengths to win the 63rd running of the $200,000 Eight Belles presented by Kentucky Trailer (Grade II) for 3-year-old fillies.

Trained by Steve Asmussen and ridden by Ricardo Santana Jr., Mia Mischief covered the seven furlongs in 1:21.84 over a fast main track in the first of six graded stakes on the Kentucky Oaks Day card.

It is Asmussen’s third victory in the race with others coming with Four Gifts in 2009 and Cashier’s Dream in 2002.

Mia Mischief is a Kentucky-bred daughter of Into Mischief out of the Speightstown mare Greer Lynn. The victory was worth $121,520 and increased Mia Mischief’s earnings to $342,320 with a record of 7-4-3-0.

It was another 3 ¼ lengths back to Salt Bae, who was followed in order by Criminal Mischief, Hold Her Tight and Amy’s Challenge.

Ricardo Santana Jr. (rider of Mia Mischief, winner) – “I first have to thank (trainer) Steve (Asmussen). He did a tremendous job training her. Today she tried so hard. It was a very nice field of horses and she was very impressive. It’s very special to have my family here with me on this weekend as well.”

Steve Asmussen (trainer of Mia Mischief, winner) – “She seems to improve in every start. I made a few mistakes with her in the past but we figured all of them out it seems. I saw during the middle of the race on the Big Board that she was well within herself and she carried herself even on the gallop out way in front.”

Rodolphe Brisset (trainer of Talk Veuve to Me, runner-up) – “She made me look good. She got a little tired at the end. This was just her second start of the year. The question now is if she can go a little farther. We have options.” 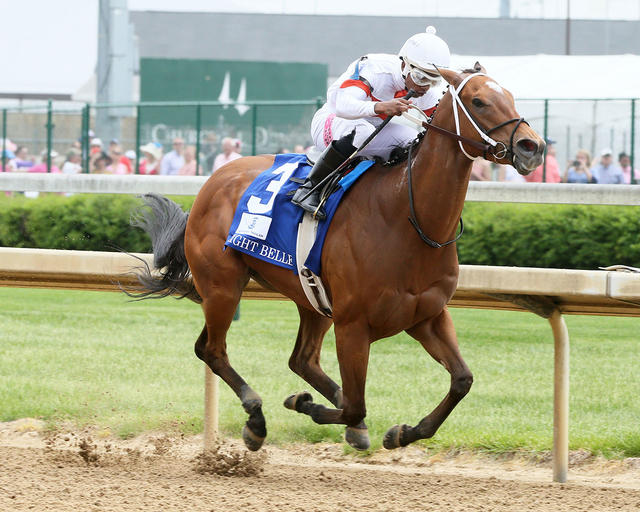