LOUISVILLE, KY (Saturday, May 4, 2019) – William and Corinne Heiligbrodt’s Mitole, benefiting from a perfect trip behind a speed duel, drew off in the final sixteenth of a mile to post a 3 ½-length victory in the 85th running of the $500,000 Churchill Downs (GI) Presented by Twinspires.com for 4-year-olds and up.

Trained by Steve Asmussen and ridden by Ricardo Santana Jr., Mitole covered the seven furlongs on a fast track in 1:21.21 and gave the owners, trainer and jockey their second Grade I victory of the afternoon.

Previously, they had teamed to win the Humana Distaff with Mia Mischief.

Bobby’s Wicked One and Promises Fulfilled dueled through early fractions of :22.38 and :44.71 with Mitole sitting just off the pace in third. At the head of the stretch, Mitole joined the dueling leaders and gradually was able to pull clear.

The victory was worth $291,400 and improved Mitole’s earnings to $992,900 with a record of 10-7-2-1. It was the first graded-stakes victory for the 4-year-old Kentucky-bred son of Eskendereya out of the Indian Charlie mare Indian Miss.

It was another 1 ½ lengths back to Do Share with Whitmore, Warrior’s Club, Majestic Dunhill, Still Having Fun, Uncontested, Uno Mas Modelo and Wild Shot following in order.

RICARDO SANTANA JR. (rider of Mitole, winner) – “(Trainer) Steve (Asmussen) has done a really amazing job with this horse. He’s a really special horse for me. Today we knew there was a lot of speed in the race and it set up perfectly for him.”

STEVE ASMUSSEN (trainer of Mitole, winner) – “He’s for real. Everyone has always been beaming about his potential and he met his potential today and is now a Grade 1 winner. The horse has been capable of what he’s done before. But you see his attitude, the way he moves, you love to see it come together. Ricardo’s confidence in the horse, the way he rode him, he didn’t panic. He wasn’t on his normal (spot on the) lead but he was comfortable. Quick back in three weeks off a very fast race, he’s a quality horse. Like I said all week, the only thing I was worried about was not running him when he was doi 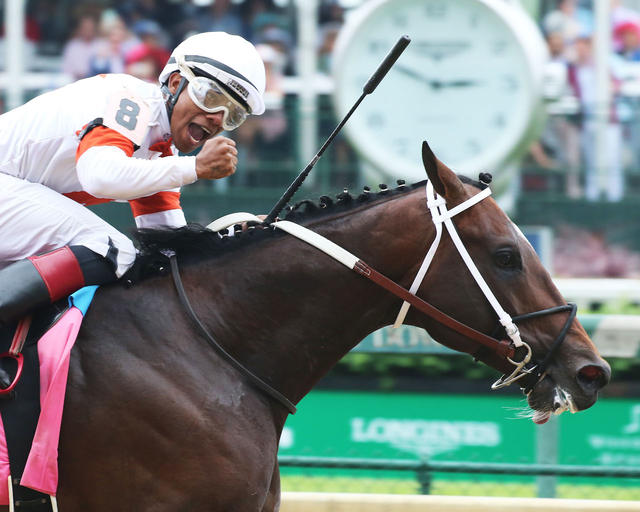