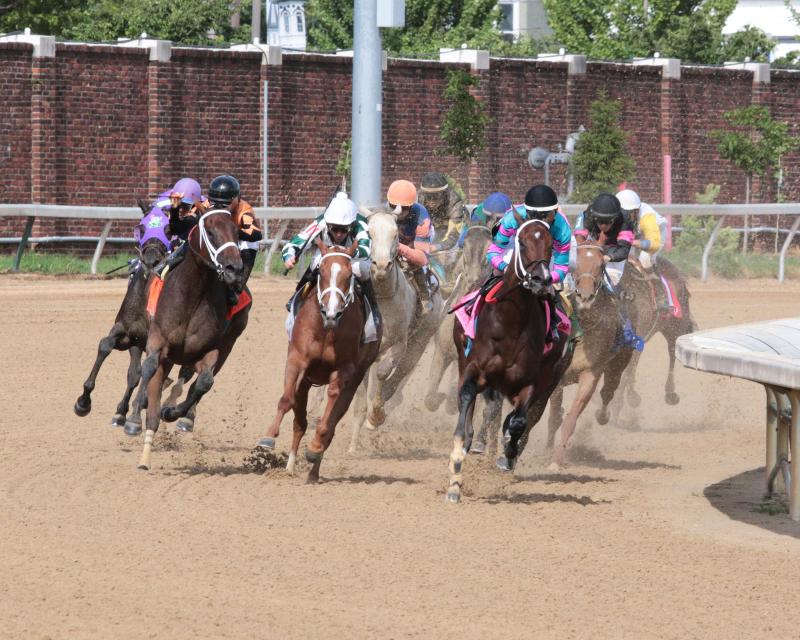 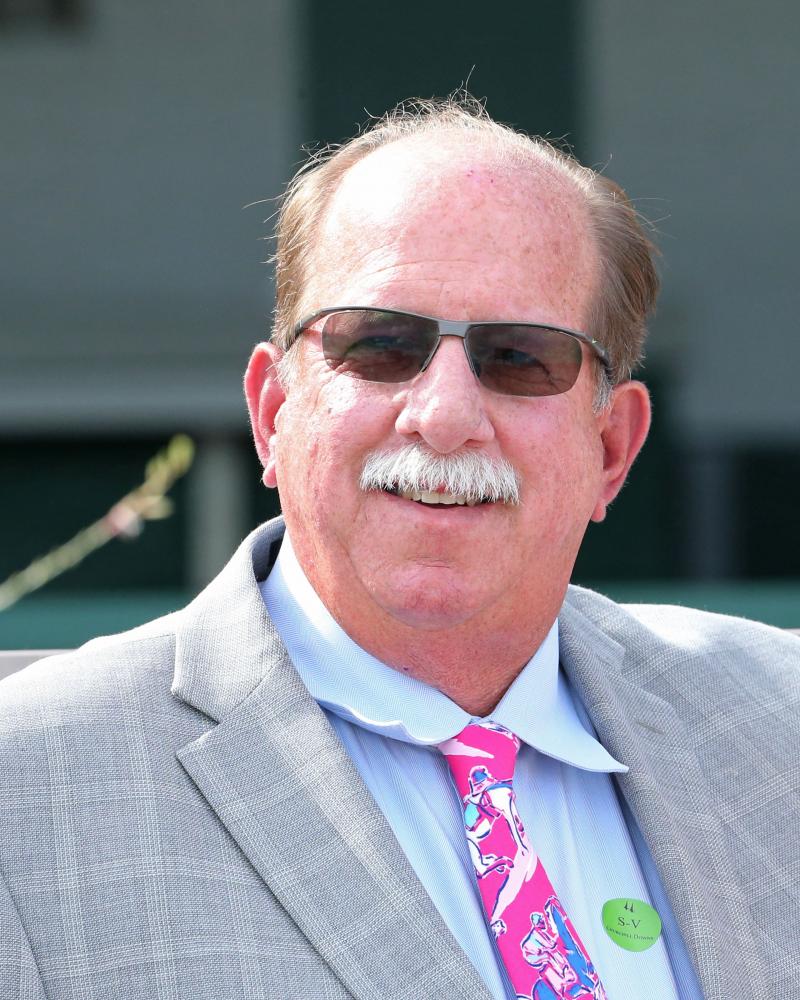 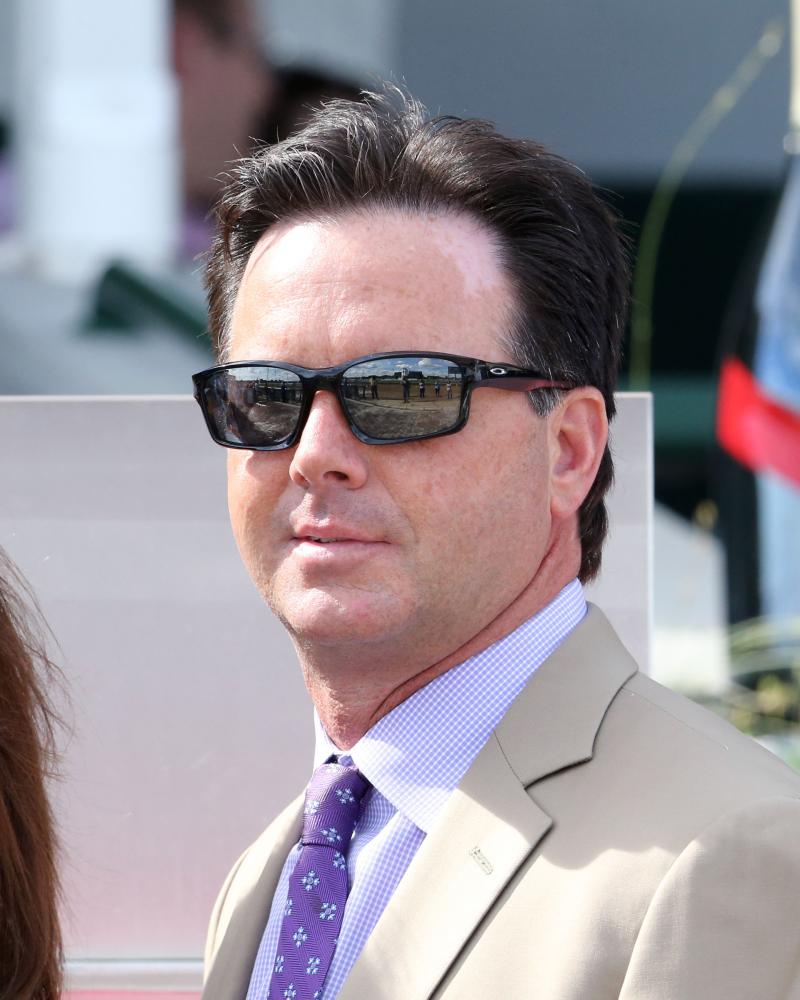 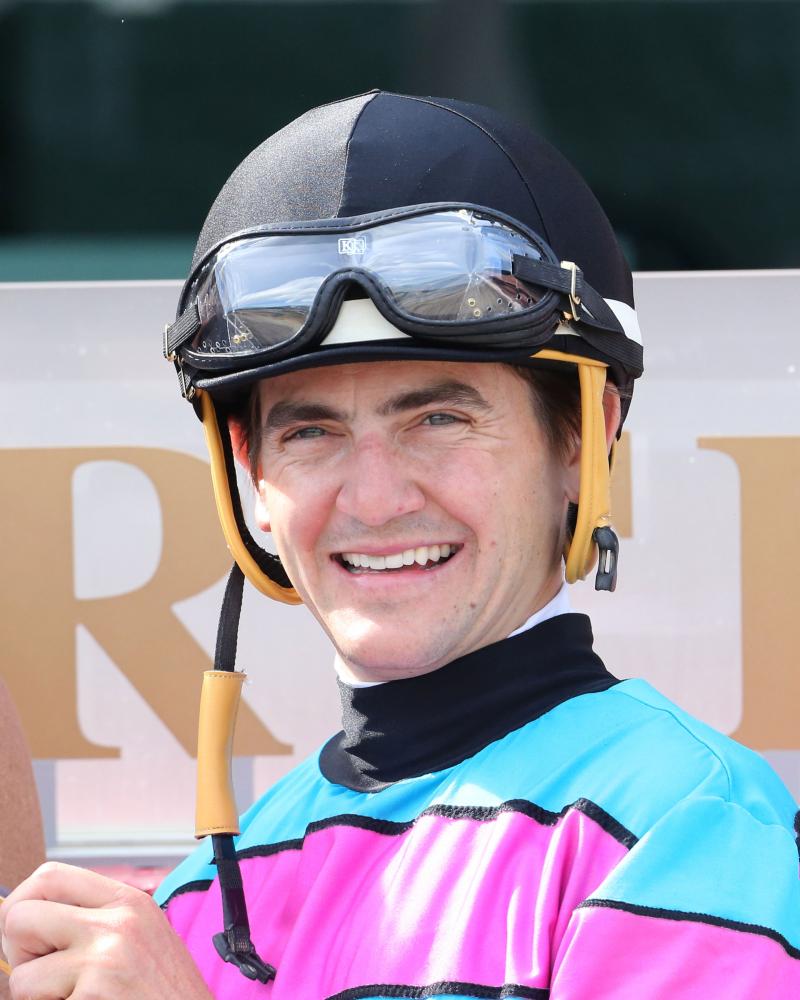 Finley’sluckycharm reaffirmed her status as the top female sprinter in Kentucky with a comfortable 2 ¼-length front-running win over Ivy Bell in Saturday’s 28th running of the $100,000 Chicago Handicap (Grade III) at Churchill Downs.

Breaking from post position No. 6 in the field of 10 fillies and mares, Finley’sluckycharm sprinted seven furlongs over a fast track in 1:22.17. Brian Hernandez Jr. – who tacked 124 pounds, which was between six and 10 pounds more than Finley’sluckycharm’s rivals – rode the winner for owner Carl Moore Management LLC and trainer Bret Calhoun.

The Chicago Handicap was Finley’sluckycharm’s eighth win in 10 career starts, fourth stakes triumph and third in a row. The 4-year-old daughter of Twirling Candy improved her record at Churchill Downs to a perfect six wins in as many starts.

“Finley’sluckycharm loves it here at Churchill Downs,” said Calhoun, who also won the 2013 Chicago Handicap with Cozze Up Lady. “It’s always nice to run at the track in your backyard.”

More importantly, Finley’sluckycharm proved to her connections that she could prevail over seven furlongs against graded stakes competition. Each of her previous seven victories came at six furlongs or less.

Sent to the post as the odds-on 1-5 betting favorite for the second race in a row, Finley’sluckycharm broke alertly from the starting gate but received brief early pressure from Kathballu on her inside and Covey Trace on the outer as she led the field through the first quarter mile in :22.85. Finley’sluckycharm surged clear as the field entered the far turn, clocked a half-mile in :45.62 and had a one-length advantage over Covey Trace as the field entered the top of the stretch. Ivy Bell had a clean trip while tracking from fourth early on and moved into second with three-sixteenths of a mile to run but could not cut into Finley’sluckycharm’s clear advantage.

“On a filly like this, you just have to stay out of her way,” Hernandez Jr. said.

She Mabee Wild, Kathballu, Covey Trace, Athena, Sweetgrass, Stageplay and Pleasant Tales completed the order of finish. Mines and Magic, Improv and Put Da Blame On Me were scratched.

“I think that winner might be the best, or very close to it,” said runner-up Ivy Bell’s trainer Billy Denzik Jr.

Prior to the Chicago Handicap, Finley’sluckycharm won last month’s $100,000 Winning Colors (GIII) at Churchill Downs by 5 ½ lengths – the largest margin of victory in 14 runnings of the six-furlong race. Her first start of the year was a three-quarter length win in the $65,340 Roxelana Overnight Stakes, also at Churchill Downs, on April 29.

As a 3-year-old, Finley’sluckycharm dazzled onlookers in late November with a runaway 8 ½-length victory in Churchill Downs’ $82,400 Dream Supreme Overnight Stakes at Churchill Downs while clocking six furlongs in 1:08.58 – a stakes record for the 12-year-old race. Her year concluded with a narrow half-length loss to Constellation in the Grade I La Brea over seven furlongs at Santa Anita in late December.

Calhoun said Finley’sluckycharm will now be considered for a pair of prestigious graded stakes races at Saratoga: the $200,000 Honorable Miss (GII) at six furlongs on July 26 and $500,000 Ballerina (GI) at seven furlongs on Aug. 26. Her year-end goal remains the $1 million Breeders’ Cup Filly & Mare Sprint (GI) over seven furlongs at Del Mar in early November.

“It’s been such a fun ride with her so far and I hope it lasts a while longer,” Calhoun said.

Finley’sluckycharm is a dark bay or brown daughter of Twirling Candy out of the Victory Gallop mare Day of Victory. She was bred in Kentucky by Lakland Farm.

This was the first year that Churchill Downs staged the Chicago Handicap. The first 27 editions were contested at Arlington Park, the Louisville track’s Churchill Downs Incorporated sister track in Arlington Heights, Ill. some 330 miles away.

Racing at Churchill Downs resumes Sunday with a 10-race card that begins at 12:45 p.m. The program features a $126,075 jackpot carryover in the 20-cent minimum Single-6 (Races 5-10) and the return of Family Adventure Day Presented by Kroger. The day of racing is complimented by plenty of family activities in the Plaza area including pony rides, inflatables, a petting zoo, stick horse races on the turf course, face painting and more.

Only four days remain at the 38-day Spring Meet. Closing week – billed as “Sunset Stretch” – begins with special Wednesday racing at 5 p.m. and is followed by Twilight Thursday at 5 p.m. and a “Downs After Dark” finale on Friday at 6 p.m.

BRIAN HERNANDEZ JR., jockey of FINLEY’SLUCKYCHARM (winner): “On a filly like this, you just have to stay out of her way. She handled the distance fine. We weren’t too concerned going into this race after she was just beaten a neck in the La Brea (Grade I) last year. She’s such a nice horse.”

BRET CALHOUN, trainer of FINLEY’SLUCKYCHARM (winner) and MAYLA (third): “I’m so proud of both of my horses. Finley’sluckycharm loves it here at Churchill Downs. It’s always nice to run at the track in your backyard. It’s been such a fun ride with her so far and I hope it lasts a while longer.”

BILLY DENZIK JR., trainer of IVY BELL (runner-up): “She’d been doing super, but we just didn’t know about this race. I thought her (speed) figures were a little light for the way she’s been running. But she’s been training great, so we took a shot and it worked out. She’s now graded stakes-placed, and the guy that owners her (Brock T. Smith) keeps looking at broodmares, so it really worked out good for her. I think that winner might be the best, or very close to it.”

Q: This is a big step for Ivy Bell – any thoughts on what might be next for her? “We’ll probably look at the Groupie Doll (Grade III on Aug. 13 at Ellis Park) with her. We’ll just get her back and look at her, but maybe the Groupie Doll. I’d like to stretch her out to a mile and, shoot, I don’t see why she couldn’t do that. So that’s probably the next step.”

SHAUN BRIDGMOHAN, jockey on IVY BELL (runner-up): “She tries hard. She’s a very, very classy filly and she runs hard every time they lead her over there. Today she was just second-best. She kind of gave me a thrill when she cut the corner and I got her to the outside. She gave me a little spurt but she was just second-best today. The winner ran a phenomenal race, but I thought she just tried for me the whole way.” 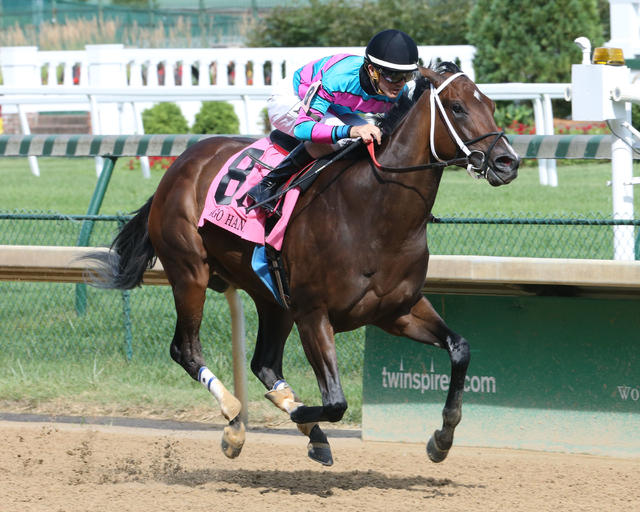