Florida-Based Nihei 'Happy to be Back' at Churchill Downs for Saturday's Grade III, $100,000 Iroquois Stakes

Florida-based trainer Michelle Nihei has not made a trip to Churchill Downs since the spring of 2013 but on Saturday, the former neuroscientist, hopes her journey to Kentucky will lead to a start in the Breeders’ Cup Juvenile (Grade I) with Royal Urn in the $150,000 Iroquois Stakes – a “Win and You’re” in event for the Nov. 2 championship race.

“Florida racing is tough over the summer,” Nihei said. “We’re holding our own and have some good horses down there. This was a logical spot to send this horse to try and get back to the Breeders’ Cup.

“It’s funny – this horse actually looks a lot like Prince Will I Am. They have very similar facial markings with spots on their forehead.”

Prince Will I Am raced at Churchill Downs five times throughout his 19-race career, most notably crossing the wire second in the Breeders’ Cup Marathon (GIII) in 2010 but was disqualified and placed 10th due to interference.

Unlike many trainers, Nihei did not grow up on the racetrack and was actually a neuroscientist prior to taking out her trainer’s license in 2007.

“I always rode horses as a kid and that had my interest growing up,” Nihei explained. “I grew up in a very academic family so I just always felt it was normal going through all of the schooling before starting my career. I was almost at a crossroads when I got out of school and was deciding if this was what I really wanted to do with my life.”

Nihei grew up in Calgary, Alberta, Canada and worked at Johns Hopkins University for nearly five years before she joined the Todd Pletcher stable in 2003 as an exercise rider.

“I sort of stuck my foot in the sport and ended up diving right in,” Nihei said. “I love it.”

The 1 1/16-mile Iroquois, one of four stakes events on the first Saturday of the 11-day September Meet, is the first scoring race on the 2018-19 “Road to the Kentucky Derby” – the series of 35 races that will ultimately determine the field for the 145th running of the Kentucky Derby Presented by Woodford Reserve (GI) on Saturday, May 4, 2019. Points awarded to the Top 4 Iroquois finishers will be 10-4-2-1 as part of the 19-race “Prep Season” that showcases foundation-building races in advance of the “Kentucky Derby Championship Series,” which begins in late February.

GELNER HOPES UNDEFEATED TAYLOR’S SPIRIT CAN NOTCH HER THIRD STAKES VICTORY IN SATURDAY’S POCAHONTAS WITHOUT HIM IN ATTENDANCE – Trainer Scott Gelner last saddled Taylor’s Spirit just 12 days ago in the $60,000 Happy Ticket at Louisiana Downs but the 51-year-old horseman will not be at Churchill Downs on Saturday to watch his undefeated filly compete in the $200,000 Pocahontas (Grade II). Instead, he will renew his wedding vows with his wife, Felicia.

“I couldn’t find a good stand in for me to renew my vows, so I guess I’d better be with my wife,” Gelner joked. “It should be a great weekend and we’re very excited.”

Owned by Norman Stables and Mark Norman, Taylor’s Spirit bested five rivals by 3 ¼ lengths in the one-mile Happy Ticket run over the turf course at Louisiana Downs. The bay filly previously won the Prairie Gold Lassie on dirt at Prairie Meadows by 3 ¾ lengths.

“The big question has been the quick turnaround from the Happy Ticket,” Gelner said. “She’s done everything right after the race and her blood count has been good. So, we’re going to take a shot. She’s a horse that has been so impressive in her early career and this is a logical next step forward. She’s already proven herself on both surfaces but I think she’s better on the dirt.”

Taylor’s Spirit, an $80,000 purchase from the 2018 OBS April Sale, has been primarily based at Prairie Meadows in Iowa and Evangeline Downs in Louisiana but will now join Gelner’s string of horses at Trackside Louisville – Churchill Downs’ satellite training facility located five miles from the main track.

The Pocahontas will be the last of 11 races on the Saturday racing program and has a scheduled post time of 5:57 p.m. (all times Eastern).

The Pocahontas also is a Breeders’ Cup “Win and You’re In” Challenge race for the Breeders’ Cup Juvenile Fillies, which will be run Friday, Nov. 2 at Churchill Downs. The Pocahontas winner will earn an automatic berth in the starting gate for the 1 1/16-mile race for 2-year-old fillies, along with $60,000 in starting fees and a travel stipend.

CALHOUN OPTOMISTIC GRANDGRAN CAN SHOW EARLY PROMISE AS HIS DAM GRAN LIONESS – There are nine 2-year-old maiden races carded over the opening three days of the September Meet at Churchill Downs with many horses making their first-career starts. One of those horses, who hopes to win on debut as his dam Gran Lioness did in 2010, is Wayne Sanders and Larry Hirsch’s Grandgran for trainer Bret Calhoun.

“We trained Grandgran’s mom and she was very precocious for us,” Calhoun said. “I sure hope this colt can follow in her footsteps because she could really run.”

“Gran Lioness was a really nice horse throughout her career but eventually had a couple of setbacks and we were forced to retire her,” Calhoun said. “I was sort of torn whether to run Grandgran going six furlongs or one mile for his debut. I was hoping to get a two-turn, one-mile race for him to start at but this will do just fine.”

“It was actually around this time last year when I saw this horse go through the ring at the (Keeneland September Yearling) sale and we decided to buy him,” Calhoun said.

The son of Super Saver was purchased for $125,000 and has been training at Churchill Downs since late June.

The six-furlong Open Mind field is led by 7-5 morning-line favorite Vertical Oak for owners Kirk and Judy Robison and Hall of Fame trainer Steve Asmussen. The filly was most recently second in the Honorable Miss (GII) at Saratoga.

The weekly horse racing radio show is co-hosted by Churchill Downs Racetrack’s Darren Rogers and Kevin Kerstein, and delivers a wide-ranging list of interesting guests, from jockeys, trainers, owners to well-informed handicappers and other industry insiders. Those outside the Louisville radio market can listen live online at http://www.espnlouisville.com.

DOWN THE STRETCH – Jockey Adam Beschizza will serve a three-day suspension beginning Sunday after he was disqualified in the Kentucky Downs Juvenile Turf Sprint Stakes on Saturday due to interference in the stretch, according to agent Liz Morris. … Top sprinter Mind Your Biscuits trained for the first time at Churchill Downs on Friday morning for trainer Chad Summers as he began preparation for the Sept. 29 Lukas Classic (GIII) and Breeders’ Cup on Nov. 3. The colt is expected to gallop Saturday at 5:30 a.m., according to Summers. … Those attending Saturday night’s NCAA football game between UofL and WKU at nearby Cardinal Stadium can get their party started early at Churchill Downs free of charge. Ticket-holders to the game will receive free admission to the track simply by showing their game tickets at Churchill Downs admission gates. … The 2019 Kentucky Derby Winner’s Trophy will be on display in the Woodford Reserve Winner’s Circle for the Iroquois. … An In Memoriam video tribute to John Asher will be shown on the Big Board immediately after the Locust Grove and prior to the Iroquois. 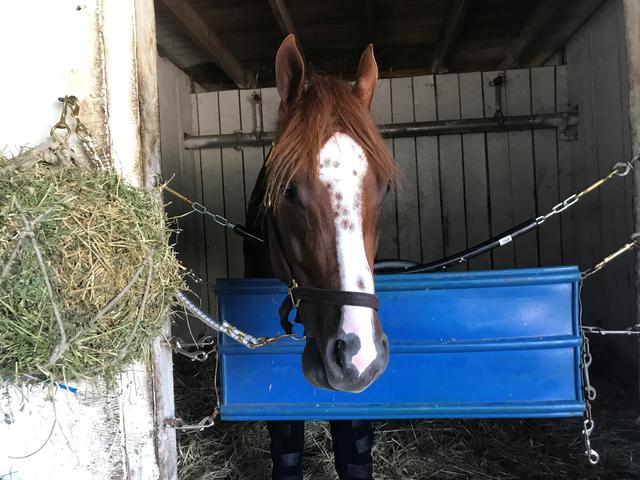