Kiss to Remember and Joe Rocco held off favored Birdatthewire to win the $200,000 Chilukki (Grade II) on Saturday, and has a date in the auction ring at the Keeneland November Sale on Monday. (Coady Photography, Churchill Downs) 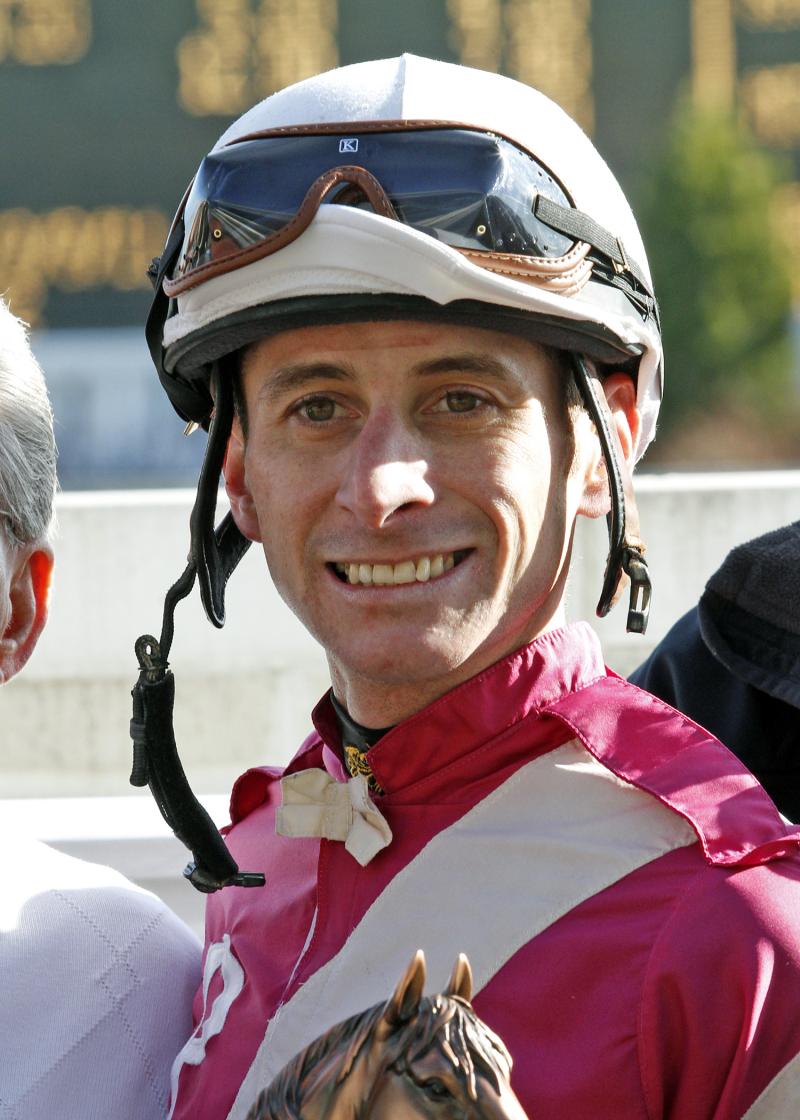 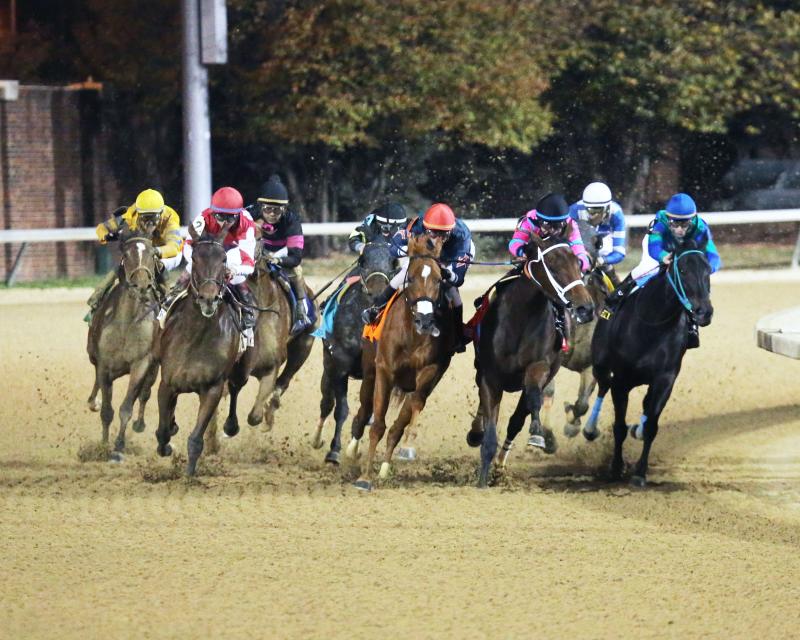 Kiss to Remember (center, red cap) surged to the lead at the head of the stretch and held on to win the $200,000 Chilukki (GII) at Churchill Downs. (Coady Photography, Churchill Downs)

Myron Miller’s Florida invader Kiss to Remember stalked the early leaders, poked her head in front at the top of the stretch and turned back a late challenge by even-money favorite Birdatthewire to win Saturday’s 31st running of the $200,000 Chilukki (Grade II) at Churchill Downs by a head.

Kiss to Remember, ridden by Joe Rocco Jr. and trained by Martin Wolfson, clocked one mile over a fast track in 1:35.80 to beat seven other fillies and mares. It was the 5-year-old filly’s fourth stakes win of her career, but, more importantly as a future broodmare prospect, it was her first graded stakes triumph.

“She’ll be going through the sale on Monday so we’ll see what she brings in,” Wolfson said via telephone from Florida. “This win definitely increased her value.”

Mayla led the field in the one-turn mile through fractions of :23.27 and :46.58 with Athena tracking in second and Kiss to Remember on her hip to the outside in third. Kiss to Remember commenced her winning move and drew within a length of the leader on turn and grabbed the lead at the head of the stretch with a rallying Birdatthewire in close pursuit to her outside. Kiss to Remember inched clear of the runner-up and held her off in the final stages of the race.

“When she takes the lead turning for home, she’s usually very tough to beat,” Rocco said. “I was very worried when the horse (Birdatthewire) came outside of her but I just kept on riding strong and she kept running strong and thank God she got to the wire first.”

Kathballu, Mayla, Unbridledexplosion, Athena and Engaginglee completed the order of finish. She’s a Bootsy Too was scratched.

Prior to the Chilukki, Kiss to Remember had only one win in nine starts this year with four seconds. She entered Saturday’s race off a fifth-place finish in the $75,000 Panama City over one mile on the Gulfstream Park turf course, a race in which she clipped heels at the three-eighths pole and lost momentum.

Kiss to Remember is a chestnut daughter of 2008 Kentucky Derby winner Big Brown out of the Irish Open mare Taft Lil Queen bred in Maryland by Big Brown Syndicate and Mr. and Mrs. Charles McGinnes.

Known as the Churchill Downs Distaff from 1996-2004, the Chilukki was renamed in 2005 to honor Stonerside Stable’s graded stakes-winning filly who was trained by Bob Baffert. The daughter of Cherokee Run made four starts at Churchill Downs, all of which were victories. Chilukki won the 2000 edition of this race in what would be her final start with a final time of 1:33.57 – a track record at the time.

Racing at Churchill Downs resumes Sunday with a 10-race program that begins at 1 p.m. ET.

JOE ROCCO JR. jockey of KISS TO REMEMBER (winner): “More or less it all worked out just like how (trainer) Marty (Wolfson) planned it out on the phone this morning. It looked like there was speed inside of us so hopefully we’d be stalking right there outside of them.

“When she takes the lead turning for home, she’s usually very tough to beat. I was very worried when the horse (Birdatthewire) came outside of her but I just kept on riding strong and she kept running strong and thank God she got to the wire first.

“Marty was pretty confident when I talked to him on the phone this morning. She had a lot of trouble in her last race and clipped heels at the three-eighths pole and was lucky to not go down and still tried afterwards.

“I’m just very fortunate to be able to ride this filly and ride for trainers like Marty.”

MARTY WOLFSON, trainer of KISS TO REMEMBER (winner): “I thought she was huge price, and I’m still not sure why. Her last race on the turf she clipped heels and got a real bad trip and I guess people just didn’t see that. She won here before so obviously she likes the track. She also really likes the one-turn mile. She won a stake at Gulfstream so that’s really her ideal distance.

“She’ll be going through the sale on Monday so we’ll see what she brings in. This win definitely increased her value.”

DRAYDEN VAN DYKE, jockey on BIRDATTHEWIRE (runner-up): “She broke kind of like she usually breaks – a little sluggish. It was a perfect trip, honestly. She was a little late switching leads, but she ran as hard as she could run.”

Q: She fought on down the stretch – did you think you might get there? “I did have a head in front between the sixteenth-pole and the wire, but that horse (Kiss to Remember) just came back a little bit and got us.”

IAN WILKES, trainer of SWEETGRASS (third): “I was proud of her. She ran a good race. We’ll just keep trying to get that elusive first stakes win. That will be great. I thought she ran better and finished off better to the wire with the blinkers on, so I think that my help.”

CHRIS LANDEROS, jockey on SWEETGRASS (third): “I had a really nice trip until that even-money shot (Birdattthewire) came up on my outside. We were all content and it wasn’t Drayden’s fault; he had a handful of horse, he was in the clear and she wanted to run. I’m not sure my filly liked having a horse on her outside. I had horse, but she kind of looked at it instead of reacting. From the three-eighths to the quarter pole I just kind of lost my momentum. But I was very proud of her for the most part. She ran well from the eighth-pole home, because she could have thrown in the towel today and she didn’t. She fought on to get third.” 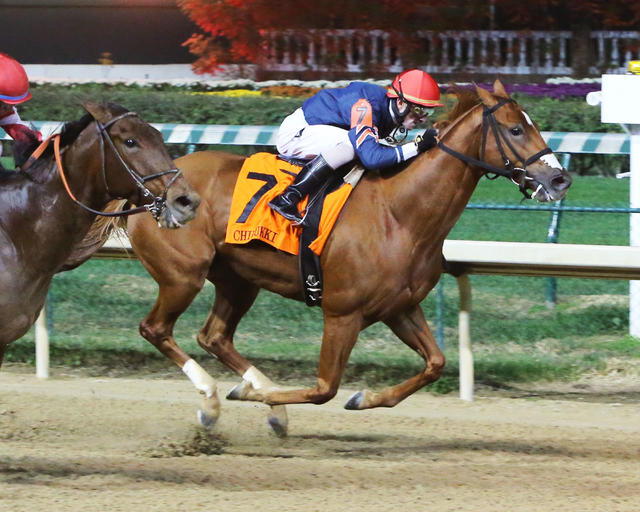