Whitham Thoroughbreds’ Four Graces, an impressive winner of a first-level allowance event three weeks ago beneath the Twin Spires, will attempt her first try at stakes competition as she tops eight 3-year-old fillies that were entered in Saturday’s 45th running of the $100,000 Dogwood presented by Woodford Reserve (Grade III).

The seven-furlong Dogwood, carded as Race 10 of 11 at 5:50 p.m. on Saturday, is a designated prep race on the Road to the Longines Kentucky Oaks and will award the Top 4 finishers 20-8-4-2 points. The co-featured event on the card is the $100,000 Aristides presented by Woodford Reserve (Listed), which goes as Race 8. First post is 1 p.m. (all times Eastern)

Four Graces, a daughter of Majesticperfection, debuted as a 7-1 winner at Gulfstream Park in March. The half-sister to multiple graded stakes winner McCraken finished fourth in her second start at Gulfstream but quickly rebounded with an emphatic 1 ¾-length score on May 16 at Churchill Downs under Julien Leparoux.

“She’s an extremely talented filly,” trainer Ian Wilkes said. “With her family we had high hopes she’d turn out well on the racetrack and when she won on debut we thought we could have something special.”

Leparoux will ride Four Graces from post position No. 2.

Chief among Four Graces rivals that entered the Dogwood is Hronis Racing’s Edgeway, a winner in two of her three starts including a 1 ½-length score in a first-level allowance at Oaklawn Park. Also entered were Three Chimney Farm LLC’s Magic Dance, the winner of last year’s Debutante and third-place finisher in the Adirondack (GII), and Rafael Lopez’s Maryland-based Wide Country Stakes winner Naughty Thoughts.

The early National Weather Service forecast for Saturday in Louisville calls for mostly sunny skies with a high near 91 degrees and a 30 percent chance of showers and thunderstorms, mainly after 2 p.m. 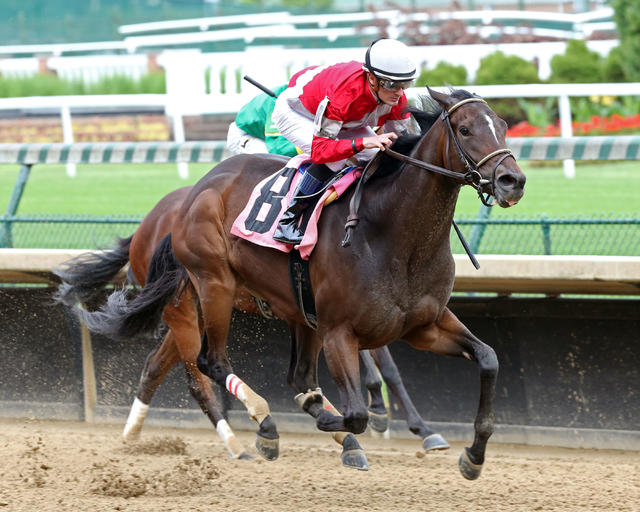