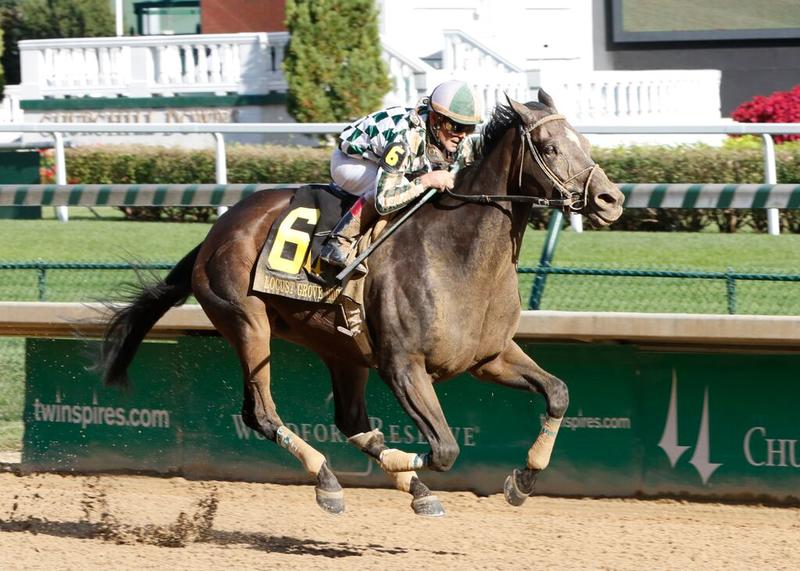 "Horse for the Course" Frivolous cruised to the finish under jockey Jon Court in her eight-length romp in Saturday's $100,000 Locust Grove.  It was the third stakes win at Churchill Downs and joined upset wins in the 2014 Falls City (GII) and this year's Fleur De Lis (GII) on her growing list of victories beneath the Twin Spires.  (Reed Palmer, Churchill Downs)

Coming off of a runner-up effort in the Delaware Handicap (Grade I) at Delaware Park behind Sheer Drama, G. Watts Humphrey Jr.’s Frivolous came from off the pace to impressively win the 32nd running of the $100,000 Locust Grove Stakes by eight lengths on Saturday at Churchill Downs.

Frivolous, a 5-year-old daughter of Empire Maker out of the Belong to Me mare Sixty Rockets, ran the 1 1/16 miles in 1:43.85 over a fast track to capture her third stakes victory. Her other two stakes triumphs, the Falls City Handicap (GII) and the Fleur de Lis Handicap (GII) also were run at Churchill Downs, and she improved her record beneath the Twin Spires to 7-3-0-2.

Jon Court, the pilot in her other two stakes triumphs, rode the winner for trainer Vicki Oliver, who trains the 5-year-old mare for her father, G. Watts Humphrey Jr.

Privet Hedge set a slow pace going :24.01 for the opening quarter-mile, with Cabana sitting a length behind the pacesetter and Diva’s Diamond 1½ lengths off the lead in third. She continued to lead by a half-length after a half-mile in :47.86 with Cabana inching her way closer to the lead. With three-quarters of a mile to run, Cabana took control while Privet Hedge dropped back to third. Frivolous began gaining ground around the far turn and asserted herself to the front as the field approached the top of the stretch. It was all over from there.

Frivolous, who finished third in last year’s Locust Grove, kicked off her 2015 campaign in an allowance race at Keeneland finishing a disappointing sixth as the 6-5 favorite. She then was a well-beaten ninth in the La Troienne (GI) at Churchill Downs before scoring a 32-1 upset in the Fleur de Lis over Sheer Drama, who would then turn the tables on her in the Delaware Handicap.

The Locust Grove was one of four stakes races Saturday at Churchill Downs. The stakes race is named after the 1790 Georgian mansion in Louisville that played home to ancestors of Churchill Downs founder Col. M. Lewis Clark.

VICKI OLIVER, trainer of FRIVOLOUS (winner): “We’ve always had a lot of faith in her since Day One; she’s shown a lot of ability. There was never a doubt that she had this ability. She’s just gotten better at five. I was a little concerned because I didn’t like where we were early on in the race. I think her biggest issue is that you can’t stop her because she’s such a big mare. She can’t get stopped and checked because of her huge stride. She trains very well at Keeneland and breezes well there, so I’m looking forward to a big effort at the Breeders Cup.”

Will the Spinster be her next start? “That was the plan. That’s why we took so much time with her. We’ll see how she comes out tomorrow. That will depend on how much the race took out of her. Sheer Drama beat us once, we beat her once. Dynamics change with the post draw. When he had the one-hole at Delaware, we had to go to the lead. I think she is capable of running with this filly [Sheer Drama]; we beat her once and she beat us once. I was hoping to run her a little earlier but the way the meet runs this was the plan after Delaware.”

JON COURT, jockey of FRIVOLOUS (winner): “She got shuffled back on the first turn, and we just had to abide the spot that was given to us which was the back and then I abided my time. There was really nothing else to do except sit and wait and execute the finish.

“I got off to a good start (at the September Meet). Hopefully I can keep the ammunition going and continue to be competitive and create some momentum right into the Keeneland meet.

“She really likes this track but just like with any other horse you don’t want to panic with whatever position you end up with regardless of it is the initial strategy or not and then you go from there and execute to where their best performance should be, which is finishing to the wire first. That’s how it played out for us today.” 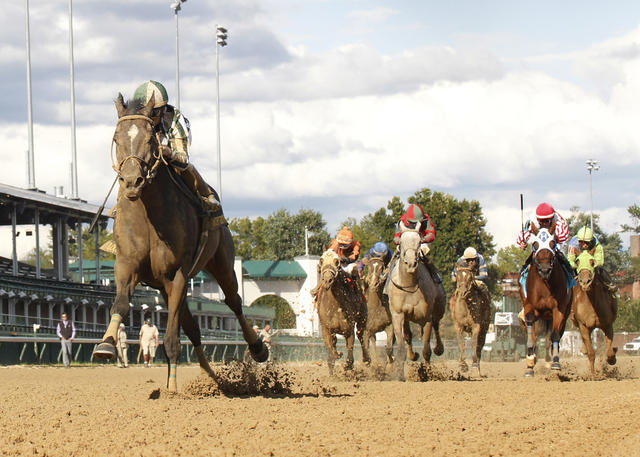