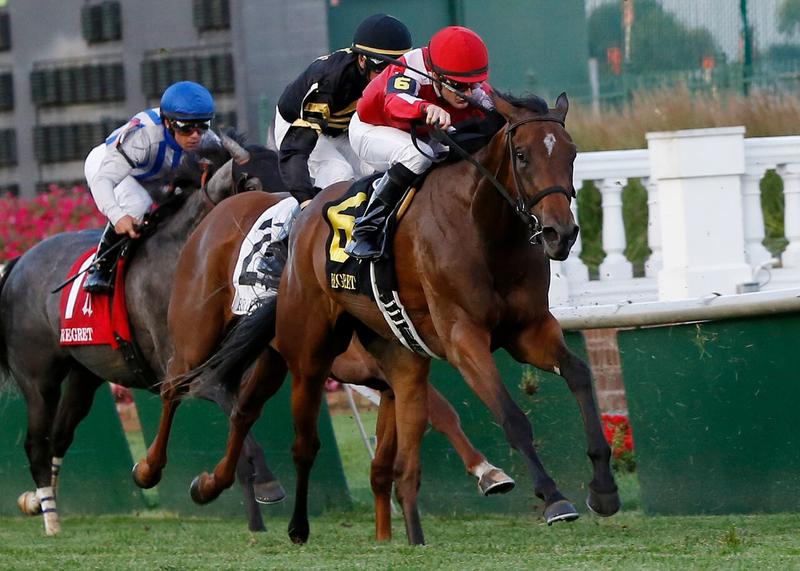 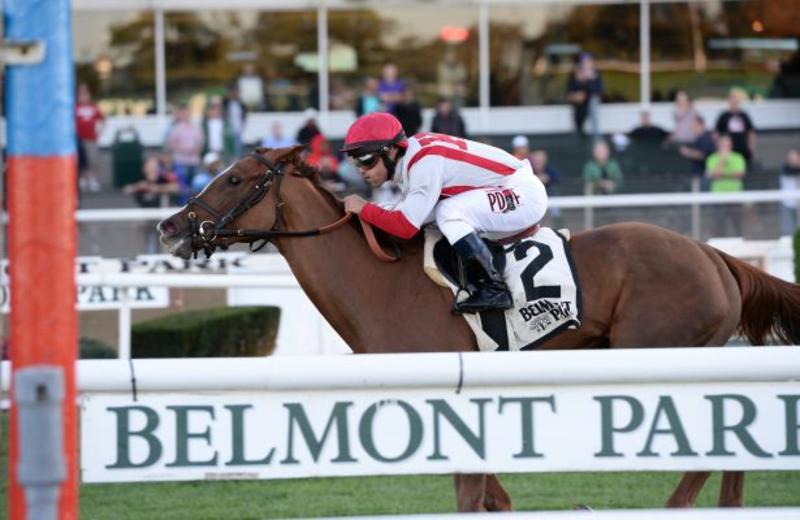 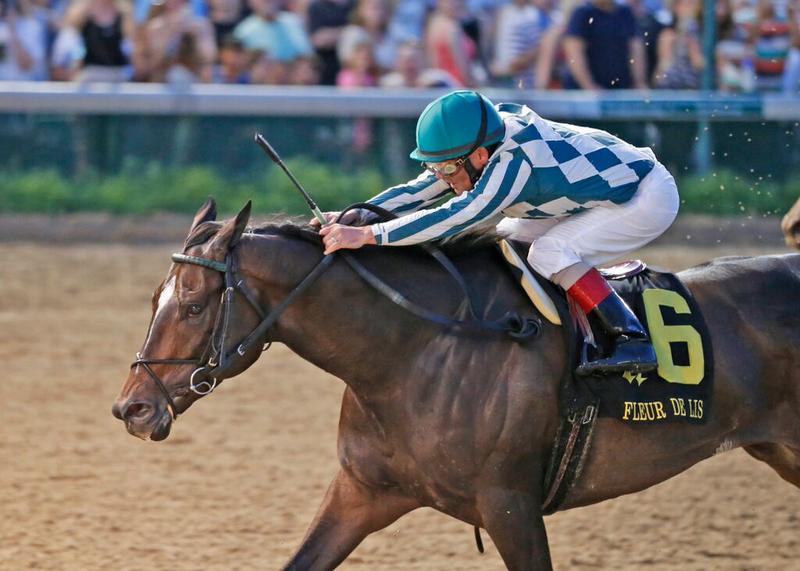 Next Saturday’s 25th running of the $200,000 Mrs. Revere (Grade II) at 1 1/16 miles over Churchill Downs’ Matt Winn Turf Course is likely to attract a full field of 3-year-old fillies, according to the track’s assistant racing secretary and stakes coordinator Dan Bork.

On Saturday morning, Bork had a list of 15 possible starters with the field limited to 14 starters. Preference is given to graded stakes winners then highest career earnings.

Canadian-bred Secret Action ($146,708, Michael Doyle) also was under Regret consideration but is entered in Saturday’s $150,000 Jammed Lovely, a restricted seven-furlong sprint for 3-year-old fillies over the synthetic Polytrack surface at Woodbine.

“That’s a really good work for her,” said Norman Casse, assistant trainer to his father Mark. “This is exactly what we’re looking for; I’m looking forward to getting to run her one more time [this year]. This is probably the last time for everyone to run against straight 3-year-olds so it will probably come up tough.”

Return to Grace, a daughter of English Channel, enters the Mrs. Revere off a fifth-place finish in the $500,000 Queen Elizabeth II (GI) on Oct. 10 at Keeneland. She has won or placed in three stakes races this year, including a victory in the $199,429 Dueling Grounds Oaks at Kentucky Downs on Sept. 19.

“She’s been doing well since then,” Casse said. “She kind of got stopped a little bit in the QE II and I think she would’ve run a better race. And I thought she ran an excellent race anyway to begin with. She’s just figuring out that she’s becoming a race horse. She works more on the bridle now. The last two works I let (regular rider) Joe Rocco, Jr. come in and work her and he seems to get along with her more than anybody else. He’ll be in the irons next Saturday. She’s a filly that just seems to be getting better with every start. Her numbers say that and the way she breezes says that. She seems to be sitting on another big one again.”

FRIVOLOUS MAY CHALLENGE MALES IN GRADE I CLARK – G. Watts Humphrey’s Frivolous, the three-time Churchill Downs stakes winner who was fifth in the Breeders’ Cup Distaff (GI), is under consideration to face males in the 141st running of the $500,000 Clark Handicap Presented by Norton Healthcare (GI) on Friday Nov. 27, which would be the final start of her career according to trainer Vicki Oliver.

“She’s already won the Falls City and this will be her last race,” Oliver said. “She’ll get some weight since she’s a filly and it’s a handicap race. If she gets some light weight it’s worth a shot. We’ve got nothing to lose.”

RICHARD OFF TO GOOD BEGINNING AT FALL MEET – It has been an excellent beginning of the Fall Meet for trainer Chris Richard, who entered Saturday with atop the Churchill Downs trainer standings with four wins in seven starts.

“We try hard every year and we’re coming off of a real good meet at Keeneland,” Richard said. “We won seven races and the horses came out real well. We enjoy it here. It’s our third year coming here and it’s always fun getting off to a good start but we try to point and have them ready for certain races for this meet. When Churchill starting having the September meet it worked out real well because the Prairie Meadows meet would end in the middle of August so it worked out well for us. We’ll just try to finish out really well through the meet and then head on over to (Oaklawn Park in) Hot Springs.”

One horse in particular that Richard spoke highly of was 2-year-old Unexplained, a winner on the Stars of Tomorrow I card that he will point toward a start in a first-level allowance race at one mile on Nov. 28.

“We’ll see how he handles winners and then take it from there,” Richard said.

AMOSS GETS TWO BAGGER ON FRIDAY –Trainer Tom Amoss enjoyed a successful Friday taking the seventh and ninth races with the Tanner’s Popsicle ($5.80) and Hazards of Love ($4), who are owned by Maggi Moss and were ridden by Corey Lanerie.

Tanner’s Popsicle made his fourth straight trip to the winner’s circle in eight starts this year, in which he has never finished worse than second. Last November, Amoss claimed the son of Wildcat Heir from trainer Bret Calhoun for $30,000.

“I think that he is an improving horse,” Amoss said. “He seems to have built a lot of confidence and (Friday)’s race was the most impressive race he’s run since we claimed him. He just seemed like a nice horse at the time and I thought that he was worth what we’re paying.”

Hazards of Love won his 25th race in 71 career starts which pushed the 8-year-old gelding’s earnings to $535,208. Like Tanner’s Popsicle, Amoss acquired Hazards of Love through the claim box. He was claimed by the trainer in March 2013 for $10,000 at Delta Downs from trainer Brent Kennedy. Since then, he has made 28 starts and has only finished off the board twice.

“[Hazards of Love] is what Tanner’s Popsicle is trying to become,” Amoss said. “Like Tanner’s Popsicle, this one is consistent and he brings it every time. His performance line was also similar when he claimed him and he’s built a lot of confidence in himself as well. He doesn’t know that he’s 8-years-old. When these young guys go out and battle with him, he just battles right back.”

DOLLASE MEMORIAL SERVICE ON SUNDAY – A memorial service for trainer Wally Dollase will be held Sunday at Southeast Christian Church at 920 Blankenbaker Parkway in Louisville. Dollase passed away on Oct. 30 after a lengthy illness at age 78. A visitation will take place at the church at 1:30 p.m. and the memorial service will follow at 3 p.m. Dollase trained champions Itsallgreektome and Jewel Princess and won 80 graded stakes races. He relocated his stable from Southern California to Kentucky in 2005 and won 24 races at Churchill Downs through the 2011 Spring Meet during that span.

FAMILY ADVENTURE DAY HIGHLIGHTS SUNDAY’S ON-TRACK EVENTS – Presented by Kroger and in partnership with Kosair Children’s Hospital, Family Adventure Day will be held Sunday (Nov. 8). While adults enjoy the racing action, the kiddos will relish numerous activities throughout the day. Tickets for adults and children age 3 and up are $8 in advance online at ChurchillDowns.com or $10 at the gate. One dollar of every event ticket will benefit Kosair Children’s Hospital. Family Adventure Day tickets include admission and access to the Courtyard (Section 119) for trackside viewing plus a wristband to access for all activities beneath the Grandstand Terrace. 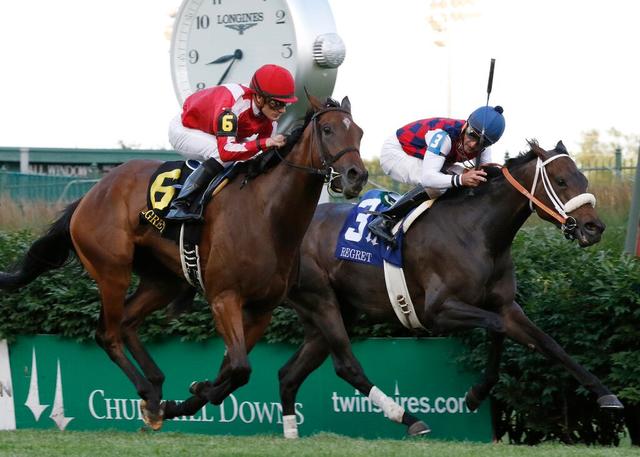