Trained by Brian Lynch and ridden by Javier Castellano, the winner covered the mile and a sixteenth over a firm Matt Winn Turf Course in 1:41.94. It is the second victory in the Edgewood for Castellano who won in 2015 aboard Feathered.

Aunt Pearl, making her 2021 debut following an undefeated 2-year-old campaign, led the field of seven through leisurely fractions of :24.32 and :49.03 as Gift List raced in third next to the hedge. At the head of the stretch, Castellano tipped Gift List to the outside of Aunt Pearl and quickly opened up.

Queen of the Green finished fourth, followed in order by Aunt Pearl, Postnup and Zaajel.

Javier Castellano (Jockey, Gift List, winner) – “I didn’t have any special instructions today; just play the break and go from there. She broke fine and I got a very good spot. Then when I asked her she gave me some amazing acceleration. She was a special winner today.”

Brian Lynch (Trainer, Gift List, winner) – “Off the last race, in her first U.S. debut, she gave a great run that day (April 3 in the Appalachian-GII at Keeneland), in a race that had no pace. She’s really trained so well from her last start to this, even though we had to work her on the dirt, which was a new thing to her. She was very comfortable getting over it, and was getting plenty out of her works. I had a good feeling going into this race, that if Aunt Pearl were to stub her toe, we’d have a good shot. “She (Aunt Pearl) was a big obstacle, no doubt. Undefeated filly. Breeders’ Cup winner. But we all know, and I’ve run into it myself with Oscar Performance, some of them take to this course and some just don’t. It had a little bit of give in it today, and my filly had some good races on soft and heavy turf. Maybe that had something to do with it.”

Joel Rosario (Jockey, Barista, runner-up) – “She ran really well. It was a slow pace. She did well. For a second I thought I was going to go on with the winner, but she was much the best.”

Florent Geroux (Jockey, Aunt Pearl, beaten favorite, fifth place) – “She was traveling great, going to the back side, she was relaxing, I just had no horse down the lane. She’s a very small filly. In my opinion, she did not move forward as much as some of those other horses.” 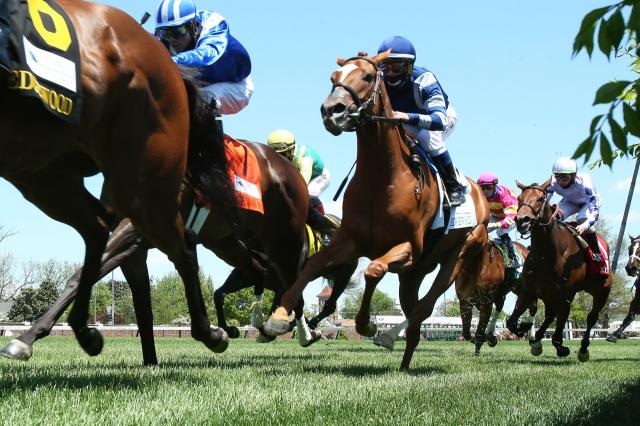