The Stephen Foster has been carded as Race 8 at 9:47 p.m. NBCSN will televise the race from 8:30-10 p.m. as part of its 2019 “Breeders’ Cup Challenge Series: Win and You’re In presented by America’s Best Racing” television schedule. Also, Horse Racing Radio Network (HRRN) will air live coverage on SiriusXM 156 from 8-10 p.m. and TVG will provide live on-site updates throughout the evening.

After the third race winner’s circle presentation is complete, there will be a special ceremony in the Woodford Reserve Winner’s Circle for Kentucky Derby (GI) winner Country House’s connections – owners Mrs. J. V. Shields Jr., E.J.M. McFadden Jr. and LNJ Foxwoods and trainer Bill Mott – to receive their engraved Kentucky Derby 145 trophies. Jockey Flavien Prat has commitments to ride at Santa Anita and will not make the evening’s presentation.

All guests Saturday will be able to take pictures with the engraved Kentucky Derby trophies beforehand as they’ll be on display just inside the Paddock Gate from 5-6:30 p.m.

Recent Belmont Stakes (GI)-winning jockey Joel Rosario is scheduled to fly into Kentucky to ride Gift Box, who drew post No. 6 in the field of 12 older horses. Rosario has been the regular rider of Gift Box since he was transferred to Sadler’s care.

Among Gift Box’s chief rivals is two-time grade I-winner Yoshida (14-5-3-0—$2,179,770). The 5-year-old son of Heart’s Cry won the 2018 Old Forester Turf Classic (GI) over the Matt Winn Turf Course prior to switching to the dirt and winning the Woodward (GI) at Saratoga. Yoshida enters the Stephen Foster after finishing sixth in the $12 million Dubai World Cup (GI) in late March.

“Before we ran him in the Woodward, he never had a start on the dirt but always trained well over it,” Mott said. “He really showed us that day that he can run over it in the afternoon as well. It’s great to have options with him and knowing he’s won Grade I races on both surfaces doesn’t hurt either.”

Mott, who ranks No. 2 behind Dale Romans in the all-time trainer standings at Churchill Downs with 713 wins, previously won the Stephen Foster in 2012 with Ron the Greek.

Jose Ortiz, who rode Tacitus to a second-place finish in last week’s Belmont Stakes for Mott, is scheduled to ride Yoshida in the Stephen Foster from post 12 at morning line odds of 7-2.

Charles Fipke’s 2017 Clark Handicap (GI) winner Seeking the Soul (26-6-6-7—$2,989,842) will attempt to avenge his Alysheba third-place finish behind McKinzie and Tom’s d’Etat in the Stephen Foster. Trained by Dallas Stewart, Seeking the Soul began his 2019 campaign with a runner-up finish behind City of Light in the $9 million Pegasus World Cup (GI) prior to finishing eighth in the Dubai World Cup.

“He’s really been bouncing around perfectly over this track,” Stewart said. “He was doing so well after the Dubai World Cup that we ran him in the Alysheba as a prep for the Stephen Foster. He ran good that day but I think he can do much better in the Foster.”

Hall of Fame jockey John Velazquez will, once again, unite with Seeking the Soul from post 4 at morning line odds of 4-1.

“Looking at the race I’d expect him to be on the lead or close to the pace,” Bridgmohan said. “(Alkhaatam) has some speed but we can be right there with him early. I don’t expect the pace to be too quick, though.”

WinStar Farm, China Horse Club International and SF Racing’s Oaklawn Handicap (GII) winner Quip (8-4-1-1—$942,500) will attempt to give jockey Florent Geroux his second Stephen Foster victory in the last three years. Trained by Rodolphe Brisset, Quip was on the Triple Crown trail as a 3-year-old after winning the Tampa Bay Derby (GII). Following his enigmatic eighth-place effort in the Preakness, the connections opted to give the son of Distorted Humor time off from the races.

“I think it was the best thing that could have happened to him, getting time off,” Brisset said. “He came back so much stronger and mature. I think he can really make a name for himself in the older horse division this year.”

Quip began his 2019 campaign with a third-place effort in the Hal’s Hope (GIII) prior to his Oaklawn Handicap score. Geroux, who won the 2017 Stephen Foster aboard Gun Runner, has the call from post 10 at odds of 10-1.

Winchell Thoroughbreds’ Tenfold (10-4-0-1—$895,890) entered the Stephen Foster after what Hall of Fame trainer Steve Asmussen described as a “breakthrough performance” after he won the $300,000 Pimlico Special (GIII) on May 17.

“We always knew he had the talent and he really fought hard to win the (Pimlico Speical),” Asmussen said. “He’s been one of those horses that always trained well and we knew he could put it together in his races but never quite got there. It was very satisfying when he crossed the wire in front in the Pimlico Special.”

Asmussen’s go-to rider Ricardo Santana Jr. has the call on Tenfold and will break from post 7 at odds of 12-1.

“He really impressed me on Derby Day,” Hawley said. “He beat some good horses in that race including American Anthem and King Zachary. If he can run back to that race, with the way he’s been working throughout the month of May and into June, we have a shot at the Foster.”

Miguel Mena rides Thirstforlife, who drew the rail at odds of 15-1.

Joe Peacock’s Sunland Park Handicap winner Runaway Ghost (11-7-2-0—$744,224) will invade from New Mexico for the Stephen Foster. Trained by Todd Fincher, Runaway Ghost cruised to a 2 ¾-length score in last year’s Sunland Park Derby (GIII) but a minor injury did not allow the son of Ghostzapper to compete in the Kentucky Derby.

Julien Leparoux has the riding assignment on Runaway Ghost from post 3 at odds of 20-1.

Shadwell Stable’s impressive allowance winner Alkhaatam (5-2-0-2—$133.848) will test stakes company for the first time in the Stephen Foster for locally-based horseman Danny Peitz. The son of Tapit broke his maiden at Oaklawn prior to his easy 3 ¼-length win in a first-level allowance race on May 12 at Churchill Downs.

“Eventually we knew we’d end up in stakes company and the Foster was a good spot to try it for the first time since it’s in our backyard,” Peitz said. “He keeps improving in every start and who knows how good he could be.”

Channing Hill will team up with Alkhaatam from post 5 and is slated at morning line odds of 30-1.

The Stephen Foster has had a strong influence on the Breeders’ Cup Classic and Horse of the Year honors. Four horses used victories in the Stephen Foster as part of their résumés in Horse of the Year campaigns: Black Tie Affair (1991), Saint Liam (2005), Curlin (2008) and Gun Runner (2017). In addition, two runner-ups were crowned Horse of the Year: Mineshaft (2003) and Wise Dan (2012). Also, Awesome Again (1998) and Blame (2010) completed same-year Foster-Classic doubles. Fort Larned won the Classic in 2012, and won the Foster the following year prior to a fourth-place run in his bid for a second Classic win.

According to the National Weather Service, Saturday’s forecast for Louisville calls for partly sunny skies with a high near 85 and a low around 71. 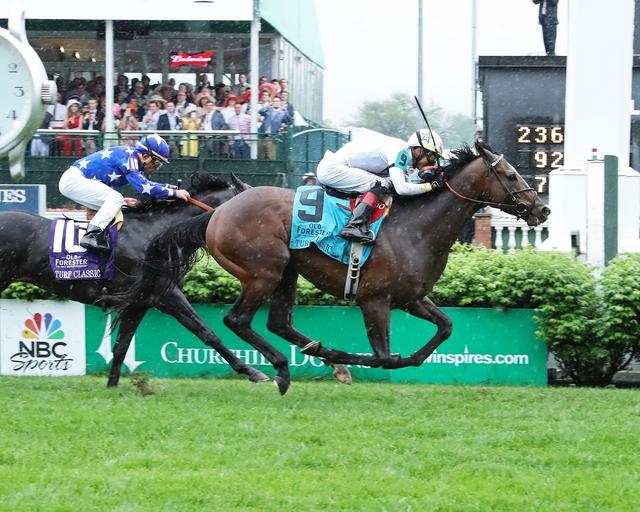