A jump in class to graded stakes company wasn’t an issue for the streaking 5-year-old mare Honey Bunny, who rallied past Astrollinthepark and pacesetter Upset Brewing in deep stretch to win Saturday’s 16th running of the $100,000 Winning Colors (Grade III) at Churchill Downs by 1 ½ lengths for her fifth win in a row.

Honey Bunny sprinted six furlongs over a “fast” track in 1:09.99 under Tyler Baze, who rode the winner for trainer John Ortiz. She paid $8.80, $5 and $4.20 as the lukewarm 3-1 favorite and banked $57,660 for the ownership group of Mark Moore’s Hooties Racing LLC, William Simon’s WSS Racing LLC and Brent Gasaway’s 4G Racing LLC.

Upset Brewing and a chasing Classy Act made all the early running and led the field of 12 fillies and mares through opening fractions of :21.46, :44.44 and :56.66 as Honey Bunny raced in the clear from the outside near the back. Around the turn for home, Honey Bunny began to pick off rivals five-wide and moved into fifth position with a furlong to run as Upset Brewing tried to hold off a bid from Astrollinthepark. The fast pace took its toll on the front runners and Honey Bunny drove past the leaders and proved to be best of all.

“She is such a classy mare,” Baze said. “She came into this race in great shape by John and his team. She simply knows how to find the winner’s circle. It really doesn’t matter what level of competition. We sort of let the speed go today and it set up perfect for us to close late.”

Astrollinthepark, at 7-1 under Gabriel Saez, got past Upset Brewing for the place and paid $7.60 and $5.80. Upset Brewing, a 20-1 longshot under Edgar Morales, paid $9.40 to show. It was another 2 ½ lengths back to Divine Queen in fourth, who was followed by Classy Act, Let It Ride Mom, Awestruck, Annathela, She’s a Gypsy, Quick Quick Quick, Suzette and Salt Bae.

“It’s so thrilling to win this stakes race for these owners,” Ortiz said. “When we claimed her we thought she would be pretty special. Now five wins in a row, and this one in the Winning Colors, really proved she’s the real deal. This is a huge win for our stable.”

The Winning Colors is named in honor of Eugene Klein’s Winning Colors, the most recent filly to have won the Kentucky Derby when she beat the boys in the 114th running of the Run for the Roses in 1988 for the Hall of Fame tandem of trainer D. Wayne Lukas and jockey Gary Stevens. Stevens was on hand to present the winning trophy.

Earlier on the 11-race program, Morsches Stable’s 4-year-old filly Gentle Ruler collared odds-on 1-5 favorite Gaining (GB) in deep stretch to win the seventh running of the $91,099 Keertana Overnight Stakes by three-quarters of a length. Lacustre (GB) was another five lengths back in third.

Gentle Ruler covered 1 ½ miles on “firm” turf in 2:31.32. Chris Landeros rode the winner for his father-in-law Ian Wilkes, the Australian-born trainer who celebrated his 54th birthday Saturday. The pace was soft as Over Thinking led the way through early fractions of :25.35, :52.05, 1:17.92 and 1:42.99 with an eager Gaining (GB) tracking to her outside under Florent Geroux. Gaining (GB) took over and inched ahead at the top of the stretch but Gentle Ruler rallied three-wide under a long drive to edge clear in the final stages.

Gentle Ruler won for the third straight time after 11 losses to start her career. The Kentucky-bred daughter of Colonel John paid $17.60 as the third betting choice in the field of six fillies and mares, and banked $61,403 to push her career earnings to $220,053. This was her first stakes win.

Racing at Churchill Downs resumes Sunday with a nine-race card that begins at 12:45 p.m. (all times Eastern).

Tyler Baze, jockey of HONEY BUNNY (winner): “She is such a classy mare. She came into this race in great shape by John (Ortiz) and his team. She simply knows how to find the winner’s circle. It really doesn’t matter what level of competition. We sort of let the speed go today and it set up perfect for us to close late.”

John Ortiz, trainer of HONEY BUNNY (winner): “It’s so thrilling to win this stakes race for these owners. When we claimed her we thought she would be pretty special. Now five wins in a row, and this one in the Winning Colors, really proved she’s the real deal. This is a huge win for our stable.”

Gabirel Saez, jockey of ASTROLLINTHEPARK (runner-up): “She ran an awesome race. (Honey Bunny) just came flying down the middle of the track out of nowhere.”

Buff Bradley, trainer of UPSET BREWING (third) and DIVINE QUEEN (fourth): “(Upset Brewing) already has black type but to get her graded black type is huge for her value. I’m very pleased with how both of these horses ran.”

Chris Landeros, jockey of GENTLE RULER (winner): “This horse keeps improving in every start. I thought she may have just needed some confidence and she got that when she broke her maiden at Gulfstream two starts ago. Since then, she’s really turned things around. She never ran poorly in any of her starts but she just struggled breaking her maiden. We had a perfect trip behind the slower pace.”

Ian Wilkes, trainer of GENTLE RULER (winner): “We got a great trip this afternoon sitting off the slow pace. I think the key was Chris (Landeros) having her a bit closer today and we were able to reel in (Gaining). She’s just getting things going in her career and has really started to figure things out.”

Florent Geroux, jockey of GAINING (GB) (runner-up): “The pace was just so slow today and I think she may need some more pace to run at. She ran well but it was such a slow pace up front.” 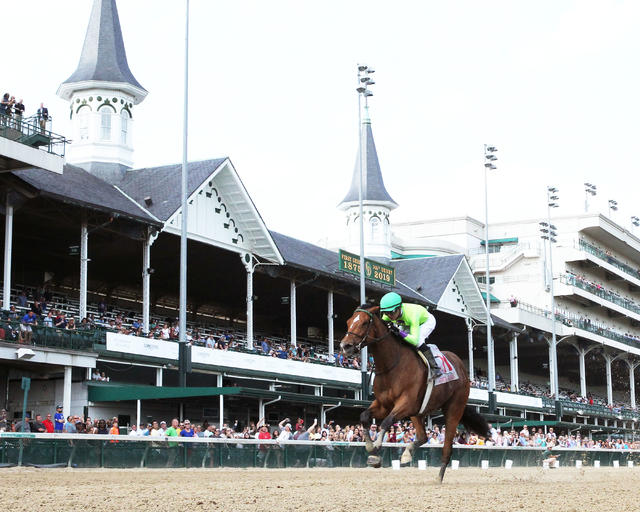