Horsemen Give Preakness Selections; Country House Back in Barn 19

The pageantry of the 144th running of the $1.5 million Preakness Stakes (Grade I), the middle jewel of the Triple Crown, will be featured prominently at Churchill Downs on Saturday with the simulcast of the 1 3/16-mile race scheduled for 6:48 p.m. (all times Eastern).

Churchill Downs admission gates will open Saturday at 11:30 a.m., the first of 11 races is 12:45 p.m. and the finale is scheduled for 5:58 p.m. Video and audio of the races from Baltimore’s Pimlico Race Course will be shown on select television monitors throughout the facility, and NBC’s coverage of the Preakness, which is Race 13 of 14 at Pimlico, will be broadcast on the massive Big Board after the last race.

General Admission is $7, reserved seating is $12 and reserved dining packages are $51. Tickets can be purchased in advance online at www.ChurchillDowns.com/Tickets. Live programs, which include past performances for the Preakness Stakes, are included in all ticket prices and available at the admission gates.

The following are Preakness opinions from select horsemen around Churchill Downs:

Trainer Jimmy Baker: “I haven’t really looked that hard into the race yet but at first glance I’d like to see Kenny McPeek’s horse (Signalman) run a big race since he’s by General Quarters.”

Trainer Phil Bauer: “I think Improbable is going to be the horse to beat.”

Trainer Bret Calhoun: “War of Will and Improbable are the two obvious choices to run well but I’d give a shot to Owendale to run a good race.”

Trainer Greg Foley: “I think the new shooters could be the ones to beat. I think Owendale could have a big shot for Brad Cox and maybe even (D. Wayne) Lukas’ horse (Market King) could do well.”

Trainer Tim Glyshaw: “I think War of Will is the likely play. He had a little bad luck drawing the rail again but he could be the best horse in the race.”

Trainer Wes Hawley: “I think Improbable is probably the best horse out of the group. I’d give War of Will a big chance as well.”

Jockey Chris Landeros: “I’ll be rooting on Bodexpress. This horse means the world to me and I hope he wins for those connections.”

Trainer Paul McGee: “I like Win Win Win. He may not have got it done in the Derby but I think he can in the Preakness.”

Jockey Edgar Morales: “I think Improbable is going to be the horse to beat. He got a rider change to Baffert’s main guy (Mike Smith) and I bet could be closer to the pace this time.”

Trainer Tom Van Berg: “I’m leaning towards Improbable. I’ve always said that the best horse in the crop may not always win the Derby but they usually win or run well in the Preakness. I think this year it’s Improbable.”

Trainer Ian Wilkes: “I haven’t looked into the race too closely but I’d like to see War of Will run well.”

“He looks good and I think the plan is to start him back with some light training,” assistant trainer Kenny McCarthy said. “We’ll start him off lightly jogging and go from there.”

No immediate plans have been made for Country House’s next start.

Trained by Tom Amoss, Serengeti Empress worked just prior to the track’s first renovation break at 6:50 a.m. ET through splits of :12.40, :24.20 and :36.40 before galloping out five furlongs in 1:00.80 and completing her work with a six-furlong gallop out of 1:14, according to Churchill Downs’ clocker John Nichols.

“I thought she really looked super this morning,” said Amoss, who reported last week that Serengeti Empress could make her next start in the June 8 Acorn (GI) at Belmont Park. “We’re still on target and letting her tell us what to do next.”

The Acorn is expected to attract the 1-2 finishers of the Kentucky Oaks, Serengeti Empress and Liora.

“It was a really good work first back,” trainer Bret Calhoun said. “I think the 1 1/16-mile distance in the Matt Winn will fit him well and, if all things go well, we’ll look at the (July 13) Indiana Derby (GIII) that’ll be at the same distance.

“Once (Louisiana Derby winner) By My Standards gets back to training we’ll have to sort through the races and see who fits where. It’s a good problem to have.”

Among the competition for Soglio is defending Louisville champion Vettori Kin (BRZ). Trained by five-time Louisville winner Kenny McPeek, Vettori Kin is slated as the co-third choice on the morning line at 7-2.

The Louisville is carded as Race 9 at 4:55 p.m. (all times Eastern) on the 11-race program that also includes a simulcast of Preakness Day action from Baltimore’s Pimlico Race Course. Churchill Downs’ first race is 12:45 p.m.

DOWN THE STRETCH – Racing continued Friday at Churchill Downs with a first post of 12:45 p.m. There was a $269,472 carryover in the 20-cent Single 6 Jackpot which covers Races 4-9. Advance wagering on Saturday’s Preakness Stakes at Pimlico Race Course near Baltimore will be offered all day Friday at Churchill Downs. Friday’s feature race at Pimlico is the $250,000 Black-Eyed Susan (GII) for 3-year-old fillies at 1 1/8 miles. It goes as Race 11 at approximately 4:48 p.m. Similar to the Oaks/Derby Double, Pimlico will offer the Black-Eyed Susan/Preakness double, which requires bettors to pick the winners of both races. … Jockey James Graham took off his mounts Friday due to a right ankle injury. He is scheduled to resume riding Saturday, according to his agent Frank Bernis. … “Inside Churchill Downs” will air Friday at 6 p.m. on ESPN 680/105.7. The one-hour horse racing radio show is co-hosted by Churchill Downs Racetrack’s Darren Rogers and Kevin Kerstein and delivers a wide-ranging list of interesting guests, from jockeys, trainers, owners to well-informed handicappers and other industry insiders. Those outside the Louisville radio market can listen live online at http://www.espnlouisville.com/ or via podcast on the station’s website or https://soundcloud.com/. … Sunday is Family Adventure Day presented by Kroger with more than 20 fun activities for kids 12 and under in the Plaza. This Sunday’s theme is “Play Sports!” and Louisville City FC stars will be in the Plaza to meet young fans: Napo Matsoso, Paco Craig and Chris Hubbard from 1-3 p.m. and Sunny Jane, George Davis, Tim Dobrowolski and Oscar Jiminez from 3-5 p.m. The day will also feature cheer and dance performances, yoga demonstrations and tennis lessons by the U.S. Tennis Association. Stick horse races, a petting zoo, mini pony rides, face painting, bounce houses, corn hole, and special area for children under 3 also will be featured. Tickets are $10 in advance and $12 Sunday (children age 2 and under are free). Family Adventure Day special ticket packages include $48 for a Family Four Pack that includes four general admission tickets, four family meals or $64 for four box seats and four family meals. For more information, visit www.churchilldowns.com. 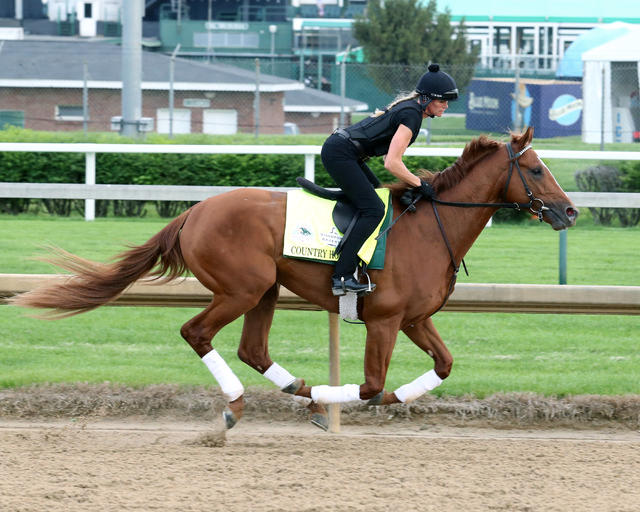