Five weeks ago, trainer Michelle Lovell said, “Look at this 2-year-old that is in my barn. I’ve never had one that acts this professional or with this much class. He could be special.”

Lovell was referring to Cliff and Michele Love’s homebred colt Damon’s Mound, who dazzled in his debut Saturday at Churchill Downs with a 12 ½-length romp in a six-furlong maiden special weight contest.

Damon’s Mound scorched his 10 rivals in 1:09.84 and recorded a 93 Brisnet Speed Rating, one point faster than top local 2-year-old Gulfport did in his debut three weeks ago beneath the Twin Spires. Gulfport is the 4-5 morning line favorite in Monday’s $175,000 Bashford Manor (Listed).

“He’s such an amazing horse and has such a great presence for one at this stage of their career,” Lovell said. “He’s always done things so professionally in the mornings when he trains and he really showed us his potential early on.”

Damon’s Mound began working at Churchill Downs in late April and recorded two gate works prior to his debut, including a swift :47.60 half-mile move.

Lovell isn’t known for training many 2-year-olds. The former jockey switched careers in 2003 and her barn found a new stride in the last two years with multiple stakes winners Change of Control and Just Might. Perry Harrison’s former $50,000 claim Change of Control has earned $833,725 while Lovell and co-owner Dr. Robert “Pappy” Griffon’s homebred Just Might has earned $958,100.

What’s next for Damon’s Mound?

“The sky is the limit for this colt,” Lovell said. “I’m so relieved we got yesterday’s win out of the way but he could be very, very special. It’s also very gratifying to his owners because they have been in the game for such a long time. They deserve a homebred with his type of potential.”

Damon’s Mound and the rest of Lovell’s stable will ship to Colonial Downs next week. 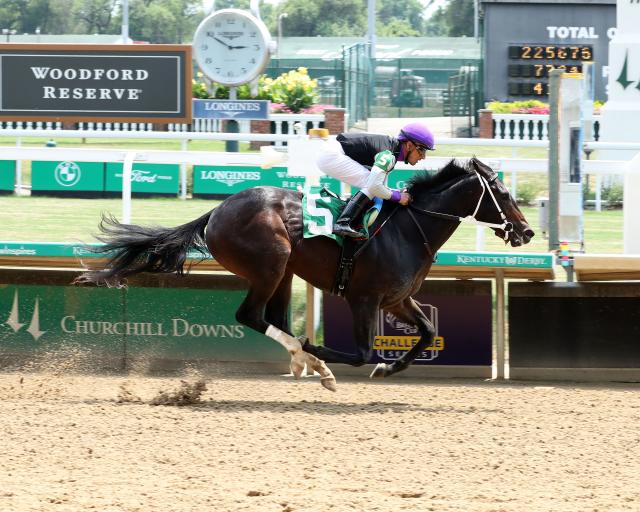