Owned by Qatar Racing, Hunter Valley Farm and Marc Detampel and trained by Brad Cox, Figarella’s Queen (8-3-2-1—$200,215) finished second behind the talented Talk Veuve to Me in the July 14 Indiana Oaks. The daughter of Medaglia d’Oro then tried the 1 ¼-mile Alabama (GI) at Saratoga but was eased at the top of the stretch.

A $250,000 Keeneland September Yearling Sale purchase in 2016, Figarella’s Queen was a two-time winner over the turf in South Florida at Gulfstream Park with trainer Gustavo Delgado prior to shipping to Cox’s barn in April.

Jockey Shaun Bridgmohan, who was aboard Figarella’s Queen for her one-length allowance victory three starts ago when she switched surfaces to the dirt, has the return call Saturday. She’ll break from the rail as she cuts back in distance.

Cox is seeking his second Dogwood victory – he won last year’s renewal with Pinch Hit – and Bridgmohan is looking for his third win in the race. He previously rode Miss Matched (2005) and Hightop (2009) to Dogwood victories.

Among the challengers to Figarella’s Queen is Sierra Farm’s homebred Everyonelovesjimmy (5-3-1-1—$107,530). The daughter of Jimmy Creed is pursuing her third-consecutive victory as she tries stakes company for the first time.

Trained by Ian Wilkes with his son-in-law Chris Landeros named to ride, Everyonelovesjimmy broke her maiden in March by nine lengths at Gulfstream Park. The bay filly won a first-level allowance race in June at Churchill by 2 ¼ lengths and, most recently, narrowly defeated a field of six as the heavy favorite in a conditioned-allowance race at Ellis Park on Aug. 11.

Also in the Dogwood field is Arlington Park-invader Jean Elizabeth, who is on the hunt for her seventh-career victory in nine starts. The speedy Illinois-bred daughter of Adios Charlie, owned by V-Leaf Stables, Richard Ravin and trainer Larry Rivelli, recently won a 6 ½-furlong state-bred allowance race by a comfortable 5 ¼ lengths over the Polytrack surface at Arlington Park.

All horses will carry 118 pounds except Figarella’s Queen who will tote 120. 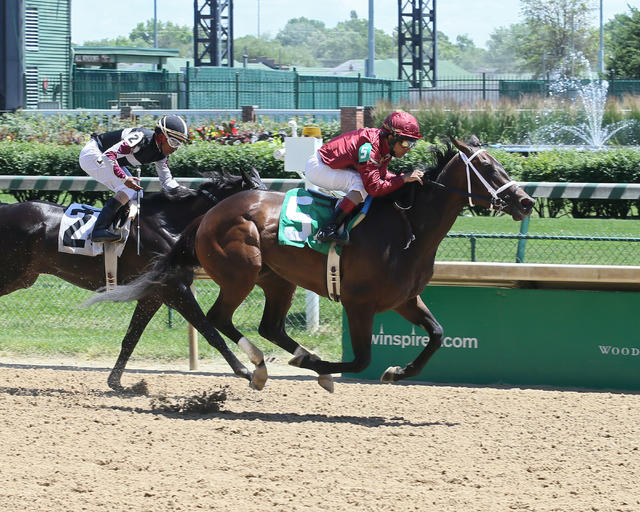