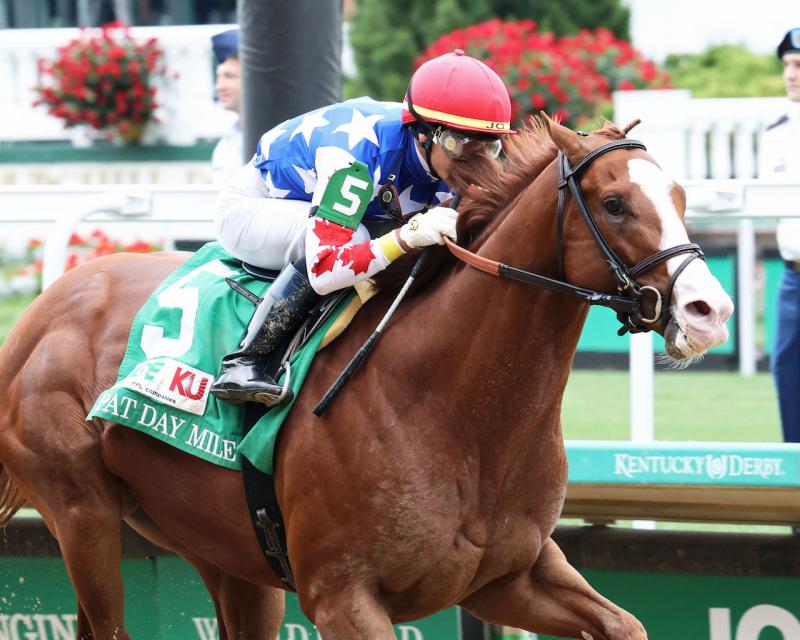 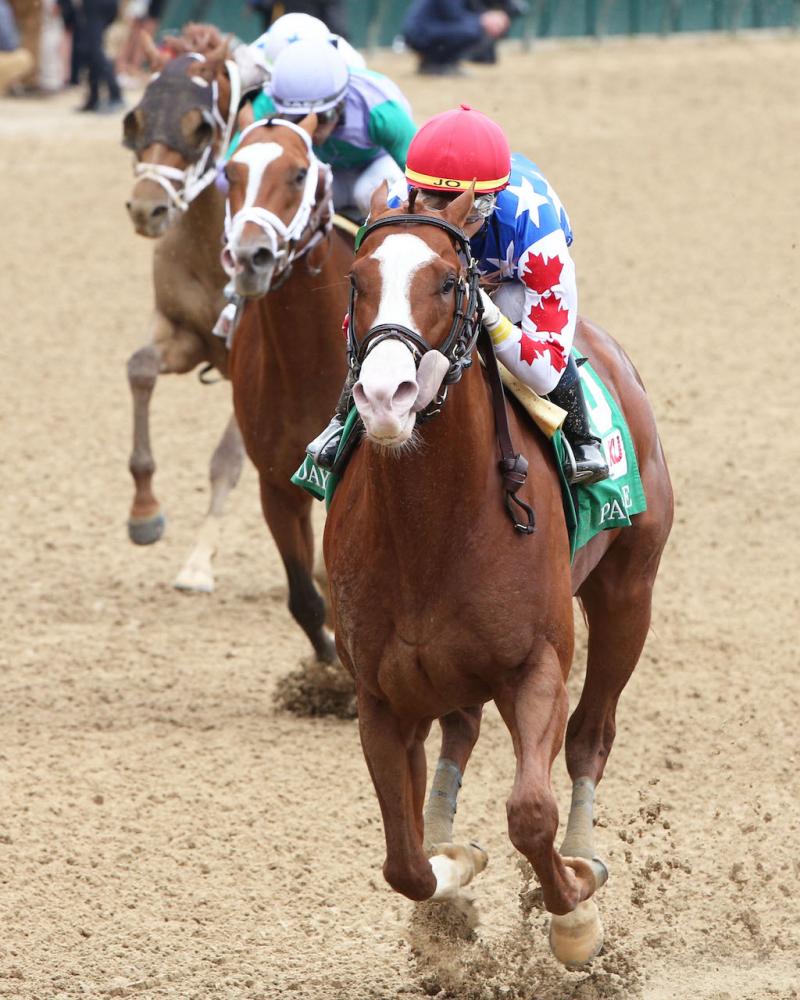 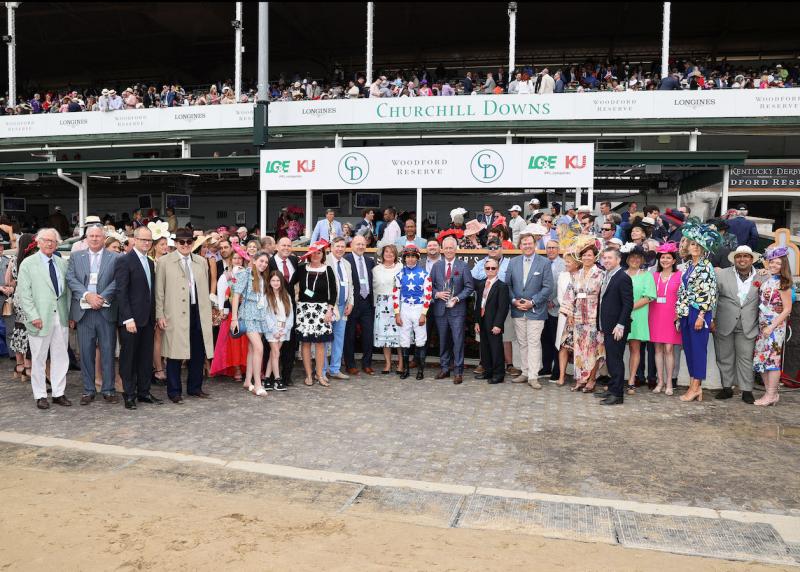 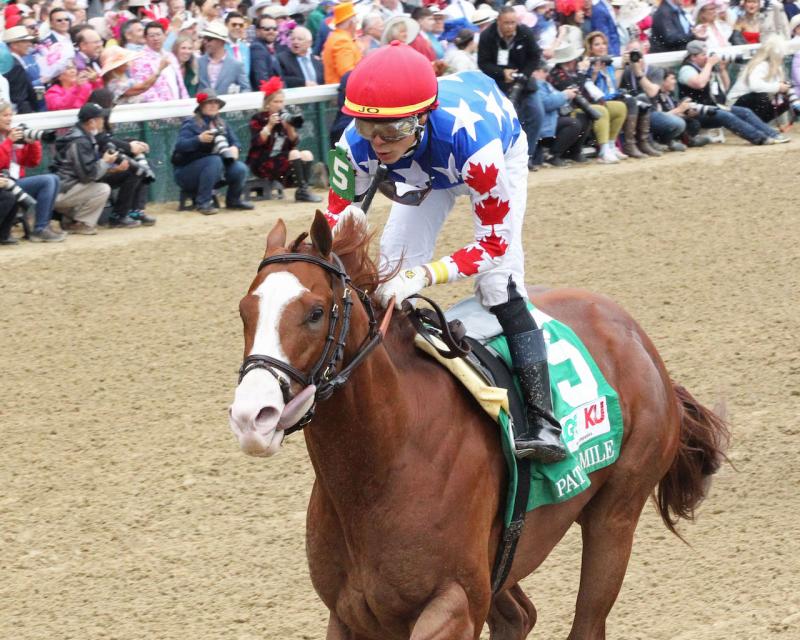 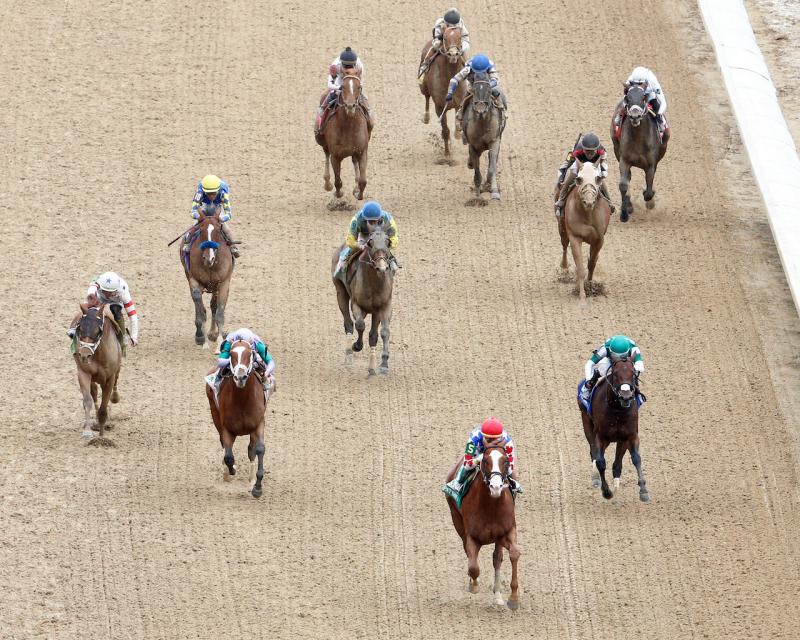 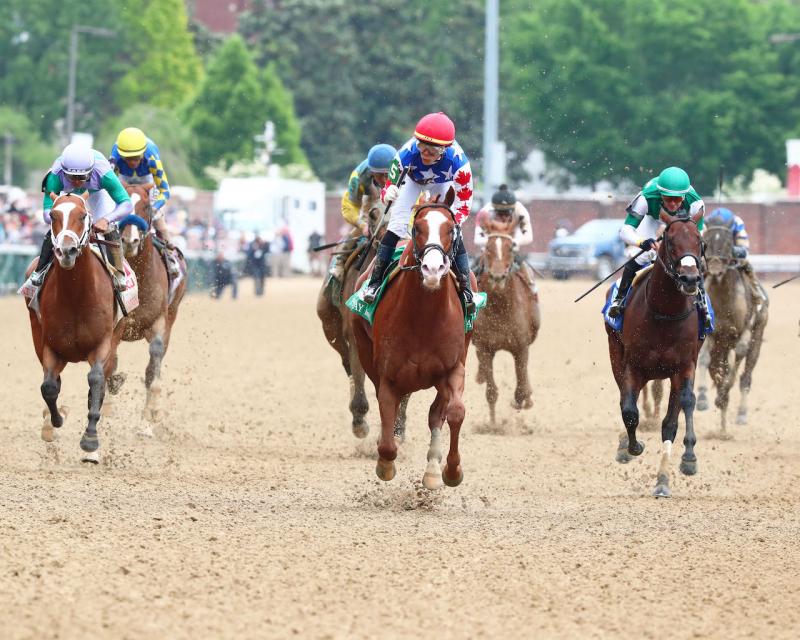 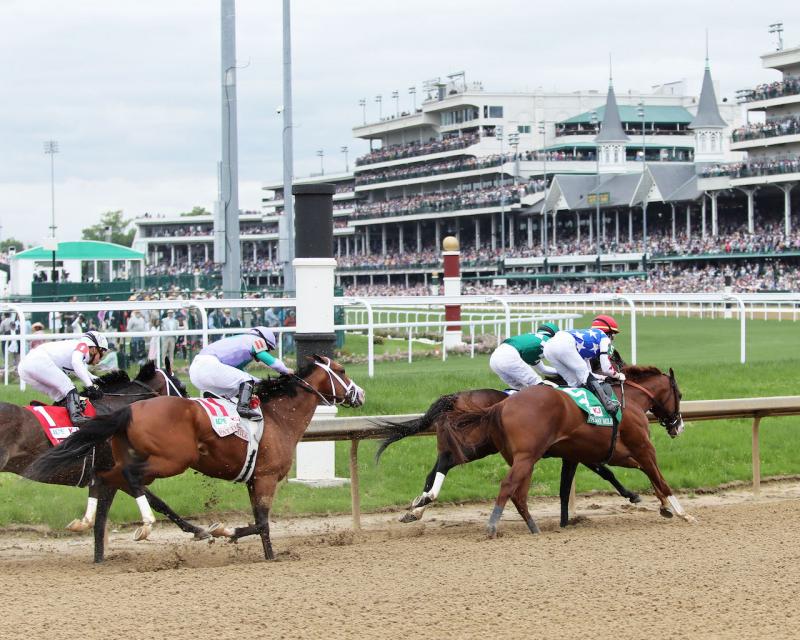 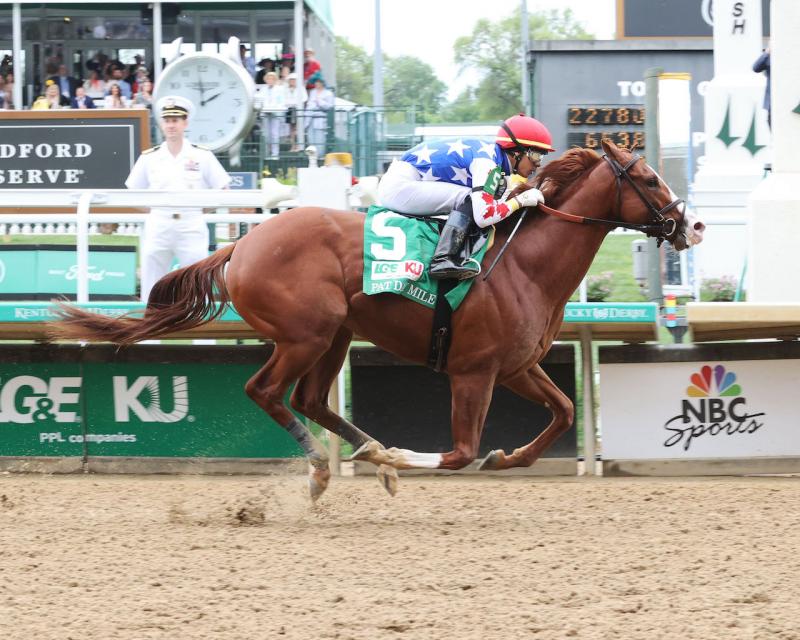 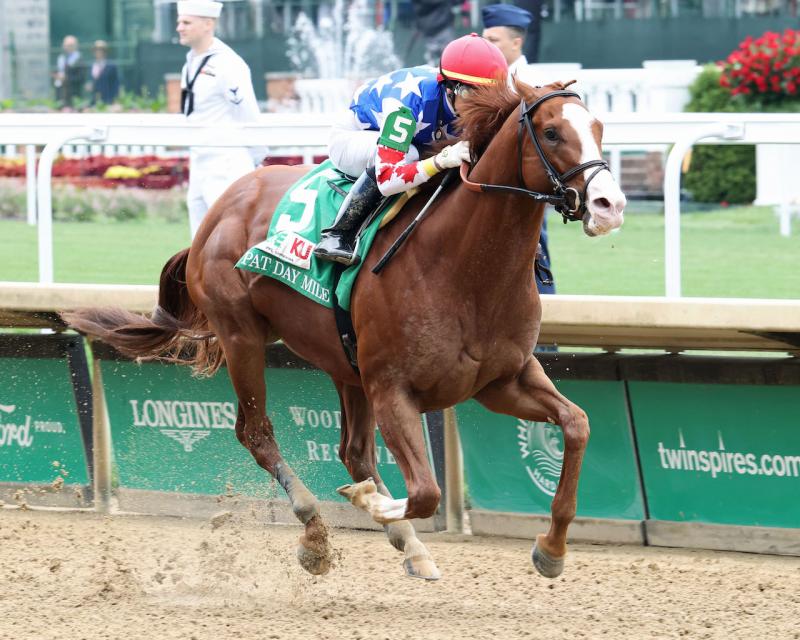 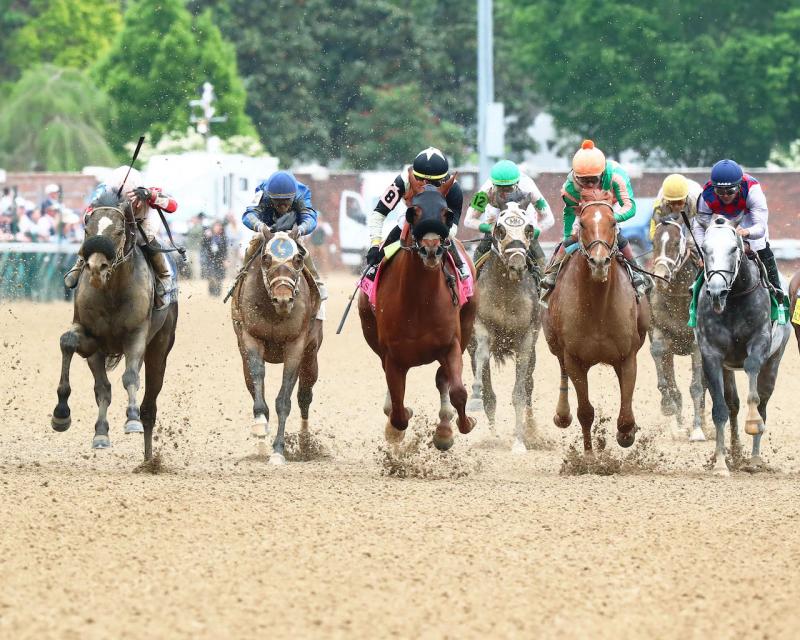 Jim Bakke, Gerry Isbister, Coolmore Stud and White Birch Farm’s undefeated Jack Christopher made a successful return to the races by scoring a 3 3/4-length victory over Pappacap in the 98th running of the $500,000 Pat Day Mile (GII) presented by LG&E and KU for 3-year-olds Saturday afternoon.

Trained by Chad Brown and ridden by Jose Ortiz, Jack Christopher completed the mile on a fast track in 1:34.81.

Pappacap was fastest out of the gate and led the field of 11 through fractions of :22.70 and :45.61 with Jack Christopher in closest pursuit.

On the far turn, Jack Christopher amped up the pressure and drew alongside at the head of the stretch and pushed by at the three-sixteenths pole and was not threatened in the run to the wire.

Making his first start since winning the Champagne (GI) in October, Jack Christopher made it three-for-three and boosted his career earnings to $621,400 with $291,400 coming Saturday.

Jack Christopher is a Kentucky-bred son of Munnings out of the Half Ours mare Rushin No Blushin.

Jose Ortiz (Jockey, Jack Christopher, winner) – “Cutting back to one mile brought my horse’s A game today. I was worried around the three-eighths pole because I thought if there was one horse that could beat me it was Pappacap after he ran so well last time. So I moved into him and when I got to him at the five-sixteenths I felt like I had him. I heard Flavien (Prat on Pappacap) asking for more and he wasn’t getting anywhere. So I was confident and waited longer so I had plenty horse for the end.”

Chad Brown (Trainer, Jack Christopher, winner) – “We asked a lot of him today after a long layoff and an injury. Coming off of a layoff, you never know, especially running a mile. I had a really good feel, here on Derby Day, I asked a lot of him. I chose this race because I wanted him to run against his own age group, and I didn’t want to sprint the horse. The pace of the race concerned me, going a straight-up sprint at 6 or 6 1/2. I wanted to run him in a race that allowed him to stretch his legs a little bit, and get comfortable at some point of the race, and protect him, and to move him forward. It certainly worked today. Jose did a great job, he got squeezed a little bit at the start, and made the good decision to use him early to move him up and out and in the clear. He really took control of the race at that point. At the end of the day, he’s a super talented race horse and if we can keep him on the track, we’ll see a lot of great things from him. This horse reminds me a lot of Ghostzapper, I was fortunate to work with that horse, he moves about the same as him, and that one had a few rough patches as well. He has a lot more to do, how far we’ll see. It’s a wonderful victory, very gratifying, but it’s bittersweet that we got him to the first Saturday in May, which we had been thinking about since he debuted at Saratoga. To get him here on the first Saturday in May, and to get him to the winner’s circle, it’ll always be in the back of my mind what could have been. It is what it is.”

Flavien Prat (Jockey, Pappacap, second) – “My horse ran really well. It was a Grade I effort on his part.”

Luis Saez (Jockey, My Prankster, third) – “He was really running at the finish. He put in a strong effort. Very good try for him.” 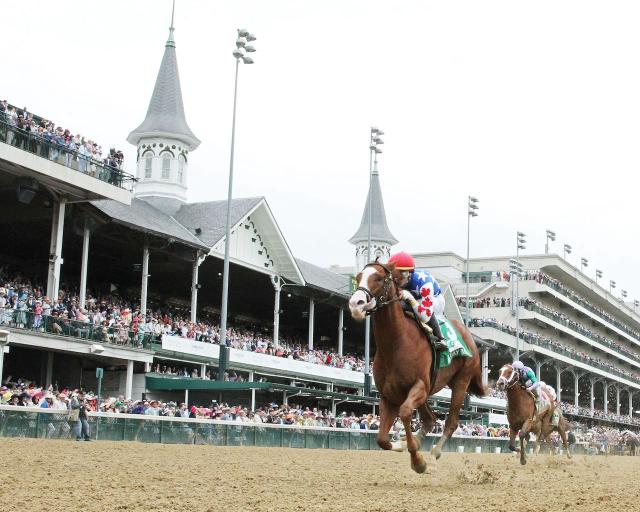