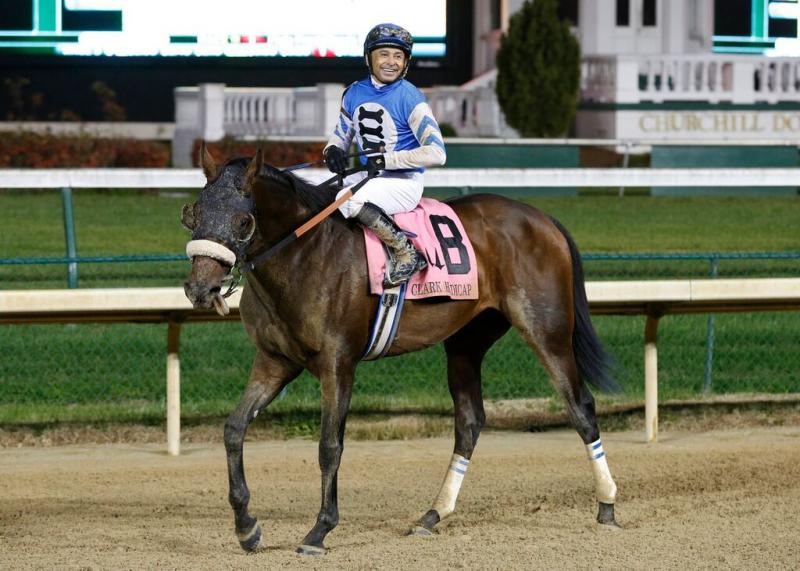 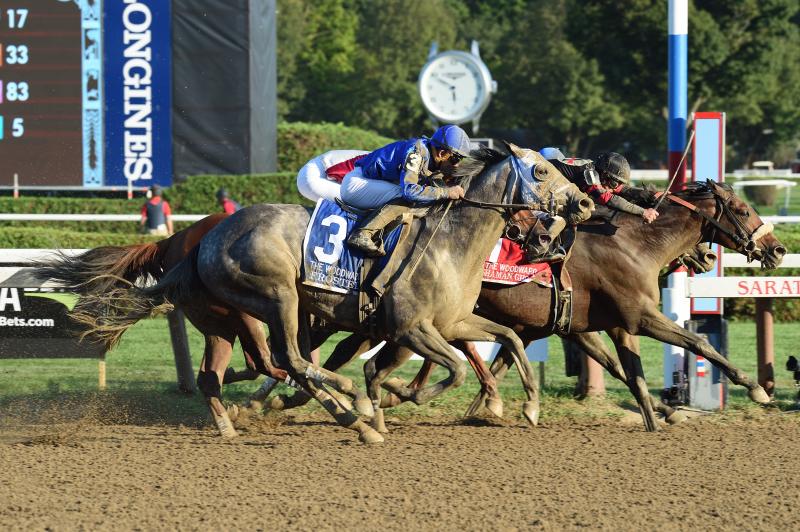 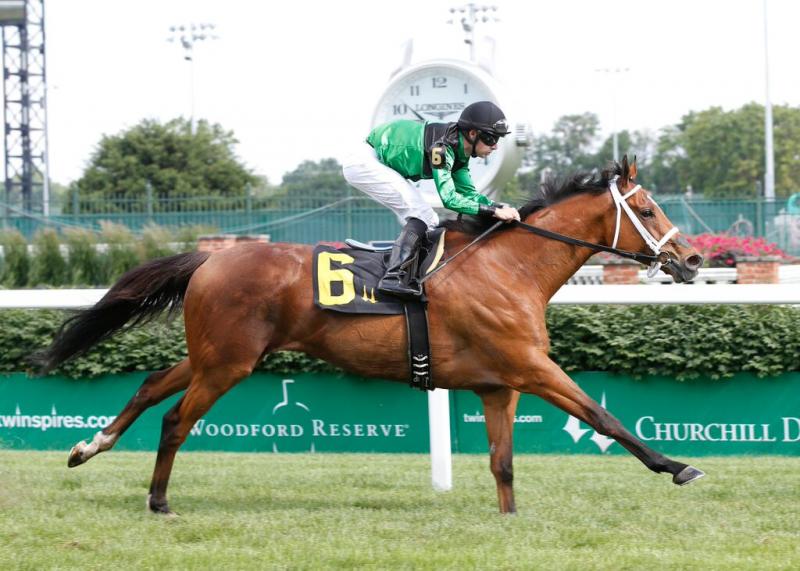 Midwest Thoroughbreds' veteran The Pizza Man, shown in a victory in the 2015 Opening Verse, bids for another stakes win at Churchill Downs in the $100,000 River City Handicap (GIII) on Thanksgiving Day. (Churchill Downs) 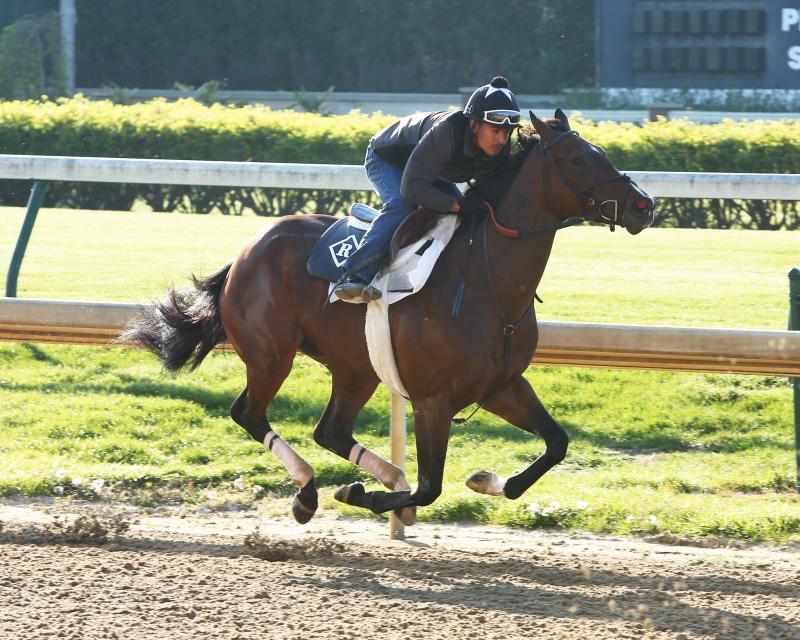 New York-based trainer Jimmy Jerkens took last year’s edition of the $500,000 Clark Handicap Presented by Norton Healthcare (Grade I) with Effinex and will bring back the defending champ along with stable mate Shaman Ghost to run in this year’s 142nd running of the 1 1/8-mile event at Churchill Downs on Friday.

Owned by Dr. Russell Cohen, Effinex entered last year’s Clark Handicap off of a second-place effort behind Triple Crown winner American Pharoah in the Breeders’ Cup Classic (GI) at Keeneland, but his run in this year’s Breeders’ Cup Classic was not quite as stellar having finished seventh beaten 24 lengths behind Arrogate.

“Last year he was coming off of a monster race and this year he’s coming off a terrible race,” Jerkens said. “It looks like he’s perked up some since then so we’re giving it a shot; it’s our last shot of the year.”

Jerkens is also represented by Shaman Ghost. The Ontario-bred son of Ghostzapper hasn’t run since he won Saratoga’s Woodward (GI) on Sept. 3. He was slated to run alongside his stablemate in the Breeders’ Cup Classic but was scratched from the race after he developed a temperature.

“Unfortunately when we went out to California he got a little bug and went off of his feed so we ended up having to scratch him before the race,” Jerkens said. “He’s done great since then though. Both horses seem to perk up in the cooler weather but they are two good horses and they’ve shown that they got a lot of class and you got to give them a try.”

Jerkens believes that it’s possible that missing the Breeders’ Cup could end up being a blessing in disguise for Shaman Ghost and noted that the nearly three-month layoff since the Woodward could be to the horse’s benefit. After all, he entered his victory in the Woodward coming off of a two-month layoff.

“His last race was off another two month gap so maybe that’s the thing with him,” Jerkens said. “No one wants to ship all the way out to California and have to scratch so we’re hoping it ends up that way then it’ll be worth it. There’s a lot of money spent and a lot of time so we got to try to make it back.”

The inaugural running of the $12 million Pegasus World Cup (GI) at Gulfstream Park on Jan. 28 is just over two months from the Clark Handicap.

“You got to think about it, but they have to run well,” Jerkens said. “He’s coming off a win so he’ll have to duplicate that and (Effinex) has to turn it around big time.”

Jerkens noted how versatile Shaman Ghost is from a pace standpoint. As a 3-year-old, he won the Queen’s Plate from well off the pace but has sat just off it in most of his races as a 4-year-old.

“Most of his races as a 3-year-old he came from out of the clouds, but this year he’s shown a little more lick,” Jerkens said. “I always like to see when horses lay closer than usual when their rider isn’t asking them. That’s usually a good sign and you’re usually in business. (Jockey Javier Castellano) had him right in his hands, three or four off the lead and saving ground so the way he looked on the backside I was pretty confident.”

Javier Castellano, who won the Clark Handicap with Quest in 2003, will return to the saddle to ride Shaman Ghost. Junior Alvarado will have the mount aboard Effinex.

THE PIZZA MAN SEEKS ANOTHER BIG WIN IN THURSDAY’S RIVER CITY HANDICAP – Not many 7-year-old Thoroughbreds can say that they can compete at the graded stakes caliber, but Midwest Thoroughbred’s old veteran The Pizza Man is an exception and will go for yet another graded stakes win in Thanksgiving Day’s $100,000 River City Handicap (GIII) at 1 1/8 miles on Churchill Downs’ Matt Winn Turf Course.

The Illinois-bred son of English Channel also was under consideration to defend his title in Del Mar’s Hollywood Turf Cup (GII), which will be run Friday.

“We were considering the Hollywood Turf Cup but the way the flights worked we would have to get there five days before the race,” said Midwest Thoroughbred’s owner Rich Papiese. “Not that we weren’t going to look at this race, but it just worked out a lot better for us timing-wise and it’s always nice to run closer to home rather than make a long trip. It actually looks like this race will be just as tough because it’s full and we’ll have to worry about traffic. (Trainer) Roger (Brueggemann) said he’s doing really well.”

The Pizza Man enjoyed his career best campaign last year at age 6 when he won four stakes, highlighted by a victory in the Arlington Million (GI) at his home track. His lone victory this year came in the Northern Dancer (GI) at Woodbine on Sept. 17. Papiese believes that he still has what it takes to continue competing at a high level.

“He was fortunate enough to win the Grade I,” Papiese said. “He came back and ran a good fourth (in the Grade I Canadian International on Oct. 16) so we were just about waiting for the right time to get him back and run him again. Roger feels that the mile-and-an-eighth is fine for him. He doesn’t really need a long distance.”

Plans for next year are still up in the air, according to Papiese, who spoke of how special it is to own a horse like The Pizza Man.

“We’ll make a decision after this race,” Papiese said. “He’s now 7 going on 8 so at this point it’s all about him. If he wants to continue on then we’ll continue on. If he wants to sit on a park bench and feed squirrels he can do that. The thing with him is that he doesn’t have a whole lot to prove; he’s done a whole lot already. I guess the best feeling is for him and (2014 Champion Sprinter) Work All Week to do as well they did and to be homebreds. It’s always nice to give the guys in Illinois something to brag about and we’ve been very fortunate. It’s great between having him and Work All Week, as I’m looking at his display case right now.”

Jockey Shaun Bridgmohan has the mount aboard The Pizza Man.

HAWKSMOOR MAKES FIRST START FOR DELACOUR IN FRIDAY’S MRS. REVERE – Trainer Arnaud Delacour believes that he has a solid turf filly on his hands with Hawksmoor (IRE), who makes her first start for the trainer in Friday’s $200,000 Mrs. Revere (GII), a 1 1/8-mile event for 3-year-old fillies over Churchill Downs’ Matt Winn Turf Course.

Previously under the care of European trainer Hugo Palmer, the daughter of Azamour (IRE) was a multiple graded stakes winner across the pond and enters the Mrs. Revere off of a hard-fought third in Keeneland’s Queen Elizabeth II Challenge Cup (GI) on Oct. 15 where she was unable to fend off eventual winner Time and Motion and late-closing second-place finisher Harmonize, who also is entered in Friday’s race.

“I’m very excited to have a filly of her caliber in my barn,” Delacour said by phone. “When she raced over in Europe she did very well and I think that if she takes on the American program well we could be looking at a very solid filly.”

How she takes on the American program Delacour will find out for sure on Friday, but the trainer is confident that it won’t be an issue for her.

“The change of training has not affected her at all and so far she has been doing everything right,” Delacour said. “I’m not surprised by her. She is a very smart filly and has picked everything up right away.”

The original plan was to freshen Hawksmoor up for the remainder of the year, but those plans changed when Delacour took notice to how well the filly was training.

“After her race at Keeneland, we thought that we should just leave her alone for a bit,” Delacour said. “But she looked so good and was training so well that (owner) Mr. (Roy) Jackson and I decided to run her one more time this year. I think we’re going to learn a lot from the race on Friday. After that we’ll start mapping out plans for next year and see what we can do.”

Jockey Florent Geroux will be in the irons for Friday’s race.

Trained by Dale Romans, who won previous editions of the Falls City Handicap with Halory Leigh (2004) and Afleeting Lady (2012), the daughter of Ghostzapper already has a pair of Grade II wins under her belt. This spring she came fresh off of her maiden victory at Gulfstream Park to win the Gulfstream Park Oaks on April 2 and later took Pimlico’s Black Eyed Susan on May 20 over stablemate Ma Can Do It.

Go Maggie Go enters Thursday’s race off a three-month layoff and has not made a start since finishing a well-beaten sixth behind champion Songbird in the Alabama at Saratoga on Aug. 27.

“We freshened her up for this race,” Romans said. “She really needed a little freshener after we ran against (trainer) Jerry (Hollendorfer’s) filly (Songbird) in the Alabama, so she’s doing well now. We’ll see what happens.”

She can run against older fillies,” Romans said. “It’s that time of year for a lot of these 3-year-olds to step up and face older fillies and mares and I think she’s one that can do it.”

Jockey Robby Albarado will be aboard Go Maggie Go for Thursday’s race.

THANKSGIVING WEEKEND STAKES – The fields for Churchill Downs stakes races on Thanksgiving weekend have been drawn. Below are the fields:

SINGLE 6 JACKPOT – There’s a 16-day carryover of $139,276 in the 20-cent minimum Single 6 Jackpot for Wednesday, and the sequence covers Races 5-10 starting at 3 p.m. EST. The Single 6 Jackpot, which features a low 15-percent takeout, will be paid out only if there is a single winning wager with six winners placed at the required minimum bet value. If there are multiple winning wagers with six winners in the six-race sequence, 90 percent of the net money wagering into the pool will be paid out, and the remaining 10 percent will carry to the Single 6 Jackpot. If there are no tickets will all six winners, 100 percent of the pool will carry to the Single 6 Jackpot. There will be a mandatory payout on closing day.

MEET LEADERS – Heading into the final week of the Fall Meet, Corey Lanerie had a two-win lead over Brian Hernandez Jr. in the Churchill Downs jockeys standings, 20-18. Julien Leparoux was third with 14 wins. Hernandez won eight races last week to lead all riders… Mike Maker had a 10-7 leader over Rusty Arnold and Brad Cox in the trainer standings. … There was a six-way tie atop the owner’s standings with three wins each between Brad Kelley’s Calumet Farm, Michael Hui, Steve Landers Racing, Maggi Moss, Ken and Sarah Ramsey and Millard R. Seldin Revocable Trust.

Racing on Thanksgiving Day has been a Louisville tradition at Churchill Downs since 1969 where more than 7,000 turkey dinners are served with all the trimmings, making it the largest number anywhere in the region.

Starting at 1 a.m. on Thursday, Levy Restaurant chefs will begin to prepare the following to serve guests of Thanksgiving Day: 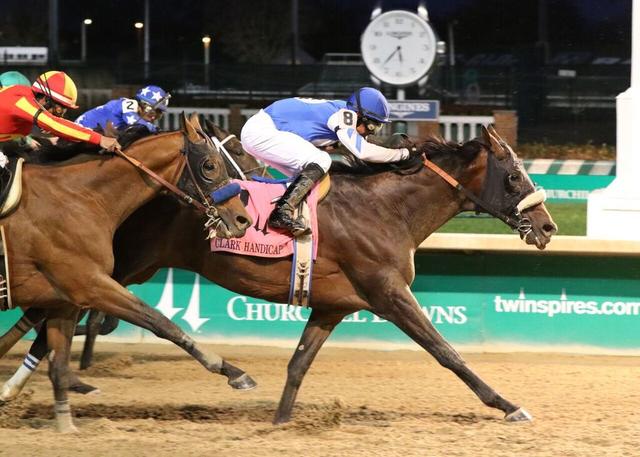