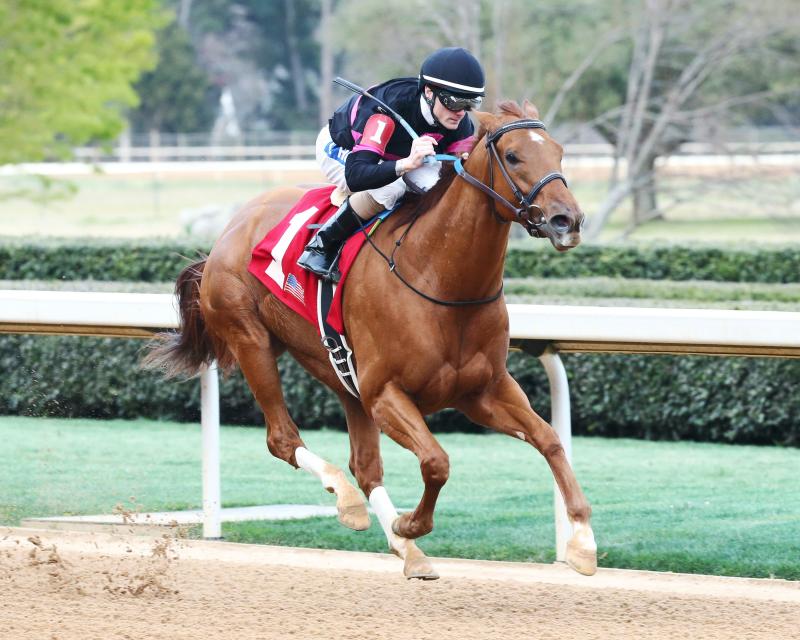 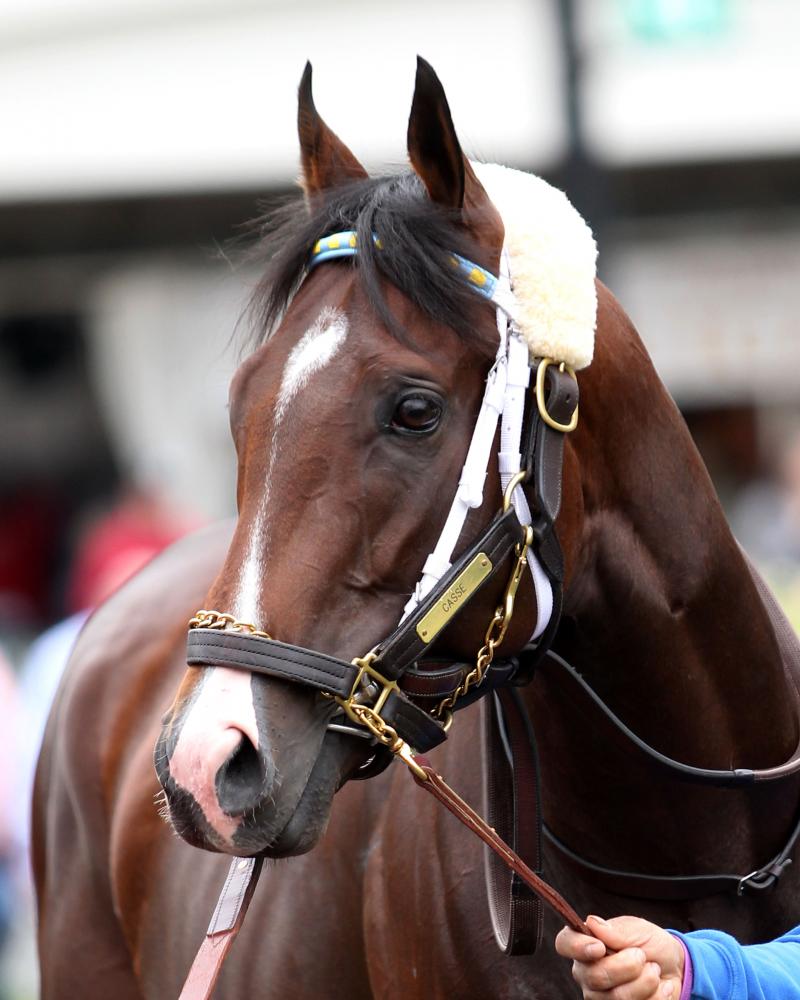 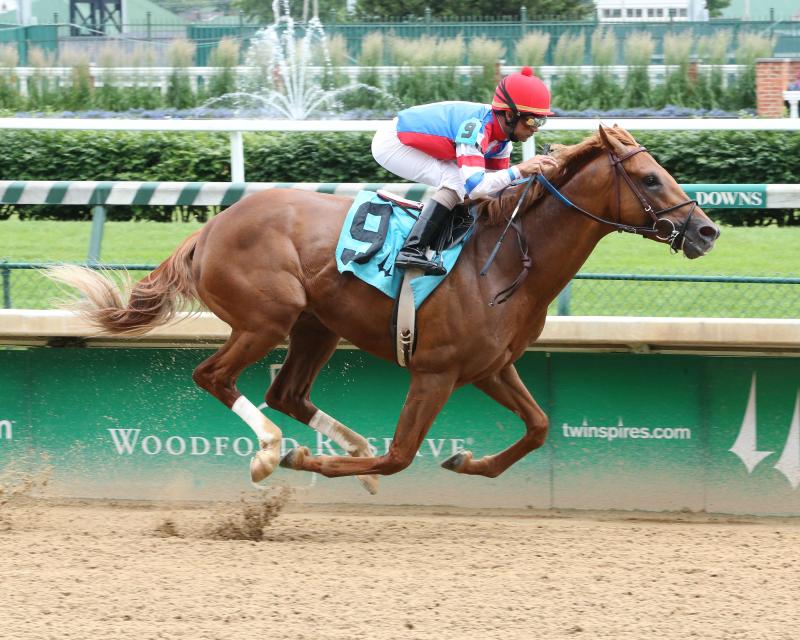 Buff Bradley and Carl Hurst's INdiana Derby (GII) runner-up The Player, shown in a victory last June at Churchill Downs, is scheduled to make his debut as a 4-year-old in $65,000 Kelly's Landing Overnight Stakes at Churchill Downs on June 30. (Coady Photography, Churchill Downs) 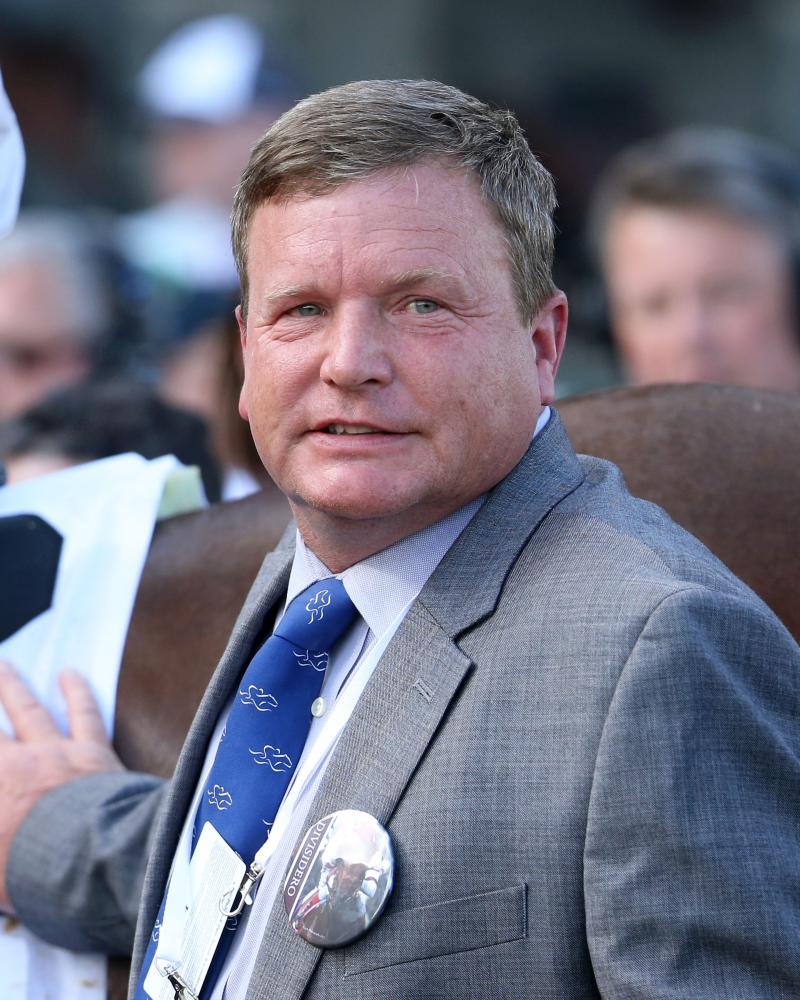 Kathballu was beaten two lengths by Finley’sluckycharm in the April 29 Roxelana but has been on the sidelines since.

“I really love the way she’s been training,” trainer Kenny McPeek’s Churchill Downs-based assistant Jeff Hiles said. “Anything is really possible with her.”

Several of the fillies and mares in the seven-furlong Chicago Handicap, including the Roxelana’s top two finishers (Finley’sluckycharm and Athena), used the May 27 Winning Colors (GIII) as a prep for this start. McPeek, however, opted to train Kathballu up to the Chicago Handicap.

“I think the timing works out perfectly,” Hiles said. “We thought the distance between the two races would suit her best; that’s why we gave her the month off.”

The daughter of Bluegrass Cat has done some of her best running locally at Churchill Downs, recording three victories and two third-place finishes through 10 starts.

CLASSIC EMPIRE EYEING SUMMER CAMPAIGN – John Oxley’s Classic Empire is putting the Triple Crown season behind him as he returns to training at Churchill Downs to prepare for the second half of 2017.

The 3-year-old son of Pioneerof the Nile has returned to training at Churchill Downs after a foot abscess sidelined him from the third jewel of the Triple Crown, the Belmont Stakes (Grade I).

“He’s doing well,” assistant trainer Norm Casse said of the Kentucky Derby fourth and Preakness runner-up. “We wanted to take it easy on him so he’s just been jogging. Obviously it was disappointing with what happened at the Belmont but there are plenty of opportunities down the road.”

Classic Empire is pointing towards the $1 million Haskell Invitational (GI) on July 30 at Monmouth Park in Oceanport, New Jersey, according to Casse.

The Kelly’s Landing is one of three stakes races on the prime-time racing program billed as “Downs After Dark Presented by Stella Artois and Finlandia Vodka.”

The Player, who is trained by Bradley, has been sidelined since a runner-up finish in last year’s Indiana Derby (GII).

“He’s really been doing well,” Bradley said. “We entered him last week in a race that didn’t fill but this spot will be fine for him.”

Prior to his runner-up in the Indiana Derby, The Player brought attention to many after an impressive 5 ½-length maiden victory on May 14, 2016. Three weeks later, the son of Street Hero closed from just off the pace to defeat six rivals by 1 ½ lengths in a first-level allowance race.

“He ran a great race in the Indiana Derby (last July),” Bradley said. “He was only narrowly defeated by Cupid. We are all excited around the barn to get him back to the races.”

The Player is the talk of the shedrow in the Bradley barn with an animated personality not usually shown by a racehorse.

“He’s such a funny horse around the barn,” Bradley said. “He literally acts like a dog sometimes. He sits in his stall, which you don’t see a horse do. We also bred him with my father and as he grew up he’s always had quite the personality. One of the funny things he does is lie down in his stall with his head sticking out below the webbing to make sure he isn’t missing anything walking by him.”

ESPINOSA TO FILL IN FRIDAY AT CHURCHILL DOWNS – Hollywood Casino at Charles Town Races announcer Paul Espinosa Jr. will fill in for Travis Stone Friday at Churchill Downs while Stone gives the commencement speech at his former high school in Schroon Lake, N.Y.

DOWN THE STRETCH – There is a growing $116,140 jackpot carryover for the 20-cent minimum Single-6 Jackpot on Races 4-9 Friday, which is scheduled to commence at 2:13 p.m. (all times Eastern) … Sunday’s card will feature the return of Family Adventure Day Presented by Kroger. The day of racing is complimented by plenty of family activities in the Plaza area including pony rides, inflatables, a petting zoo, stick horse races on the turf course, face painting and more. … “Inside Churchill Downs” airs every Saturday from 10-11 a.m. on ESPN 680/105.7 with hosts John Asher, Darren Rogers and Kevin Kerstein. The one-hour radio program features interviews from top trainers, jockeys and handicappers around the track. Those outside the Louisville area can stream live on www.espnlouisville.com. … The “Who’s the Champ? Handicapping Contest” returns Sunday. Interested participants can enter for $35 ($30 for TSC Elite members) for a chance to win the $1,000 cash voucher first prize by placing mythical $2 win and place bets on Races 3-8. Second place receives a $500 voucher and third place is worth a $200 voucher. Registration takes place between 11:30 a.m. and 1:30 p.m. on the Clubhouse second floor at the top of the Gate 17 escalators. 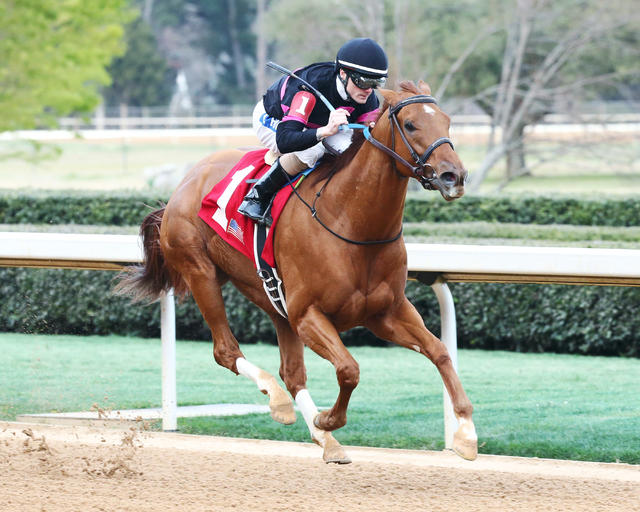