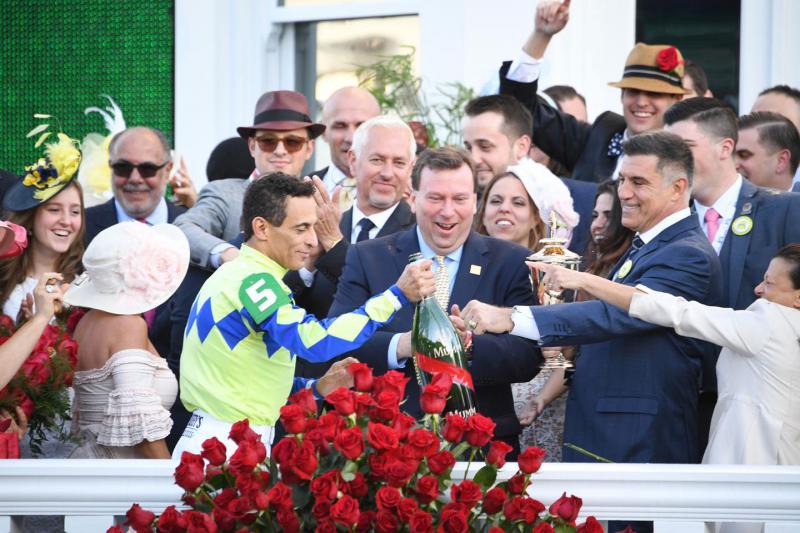 John Velazquez, rider of Always Dreaming (1st) – “This is the best horse Todd (Pletcher) and I have ever come to the Kentucky Derby with. Nothing against all the others, but this was the best horse. I got a good position with him early and then he relaxed. When we hit the quarter pole, I asked him and he responded. He did it himself from there.”

Corey Lanerie, rider of Lookin At Lee (2nd) – “My horse ran great. I’m caught with seconditis – second in the Preakness and now second in the Derby. I’m still very happy.”

Flavien Prat, rider of Battle of Midway (3rd) – “We got a good trip. He broke well from the track, took me right there. He ran a huge race. He gave me everything he had.”

Julien Leparoux, rider of Classic Empire (4th) – “We got bumped around really hard at the start which put us in a very tough position early. He really only had one race before this but we’ll get them next time.”

Joel Rosario, rider of Practical Joke (5th) -- “Going into the final turn I thought we were in a great spot but turning for home my horse just stayed in the same spot.”

Jose Ortiz, rider of Tapwrit (6th) -- “In the beginning the 17 hole (Irish War Cry) came over on me. I got in good position behind Classic Empire but he didn’t respond today.”

Javier Castellano, rider of Gunnevera, (7th) – “I didn’t think he handled the (sloppy) track at all. In the beginning, he was holding it together, but when asked him for speed and to pick it up, he struggled quite a bit. It was disappointing.”

Brian Hernandez Jr., rider of McCraken (8th) – “We got knocked around a little bit leaving there but from that point on we had a pretty uneventful trip. Turning for home we just weren’t on the best horse today.”

Victor Espinoza, rider of Gormley (9th) – “I had a great trip, but not enough horse. He never really picked up the bridle.”

Rajiv Maragh, rider of Irish War Cry (10th) – “My trip was ideal, what I was hoping for. He broke well out of the gate and got a good position. He relaxed beautifully off the pace. Going into the turn, I seemingly had a lot of horse. I was ready to engage the five horse (Always Dreaming), he just kind of quit running on me.”

Florent Geroux, rider of Hence (11th) – “I just couldn’t keep up. I was trying to follow lookin at lee but I could never catch up.”

Ricardo Santana Jr., rider of Untrapped (12th) – “It’s a tough trip but it’s the Derby. I wish we could’ve gotten a better trip.”

Mike Smith, rider of Girvin (13th) – “He felt OK but he was struggling with the racetrack early on. He was getting knocked around so many times and the poor guy just never had a shot inside. I felt like I was in the one hole. I finally get him running at the three-eighths pole and someone wiped out four of us again. The shot was over then.”

Tyler Gaffalione, rider of Patch (14th) – “We had a good trip. We came into the stretch and got behind a couple of tiring horses, but he came back well and move on to the next race.”

Luis Saez, rider of J Boys Echo (15th) – “Everybody came from the outside and killed us. I tried to rush him and see what we got, but by the half-mile everybody’s gone.”

Channing Hill, rider of Fast and Accurate (17th) – “He ran good and he ran his race. We wanted to make the lead but we weren’t fast enough. I thought I shot early on but not able to quicken him.”

Mario Gutierrez, rider of Irap (18th) – “I was in a great spot going around the turn and on the backstretch. I was following the speed and my horse was moving well. Once I asked him to respond he flattened out.”

Jose Lezcano, rider of State of Honor (19th) – “I think my horse didn’t like the sloppy track. He broke good, I put him in a good position and let him go a little early. He stopped early but I think (on a fast track) he can go longer.”

Christophe Soumillon, rider of Thunder Snow (DNF) -- “I don’t know what happened at the start.”