WinStar Farm, China Horse Club International and Starlight Racing’s Improbable, who went off the 4-1 favorite in last Saturday’s $3 million Kentucky Derby Presented by Woodford Reserve (Grade I), returned to the track Thursday morning at Churchill Downs for the first since being elevated to fourth in the Run for the Roses.

With Humberto Gomez aboard, Improbable came onto the fast track just before 6:30 a.m. (all times Eastern) and jogged once around alongside a pony with assistant trainer Jimmy Barnes aboard.

“(Trainer) Bob (Baffert) said to just jog him today,” Barnes said. “I am very happy with him. He was feeling good, bucking and playing. It was difficult to keep his feet on the ground.”

Baffert is scheduled to return to Louisville Sunday from his base at Santa Anita.

Mike Smith will ride Improbable in the Preakness (GI) on May 18 for Baffert.

Five other horses stabled at Churchill Downs with the Preakness as their next target had routine mornings.

Gary Barber’s War of Will jogged two miles alongside a pony with Kim Carroll aboard for trainer Mark Casse. Tyler Gaffalione has the ride back in the Preakness.

Top Racing, LLC, Global Thoroughbred and GDS Racing’s Stable’s Bodexpress galloped 1 ¾ miles to the delight of Gustavo Delgado Jr., son of trainer Gustavo Delgado. No rider has been confirmed for the Preakness.

Rupp Racing’s Owendale, winner of the Lexington (GIII) at Keeneland in his most recent start, galloped 1 ½ miles at 5:45 a.m. for trainer Brad Cox.

ABYSSINIAN MADE 3-1 FAVORITE IN SATURDAY’S MAMZELLE – Hat Creek Racing’s Abyssinian was made the 3-1 favorite for Saturday’s first running of the $100,000-added Mamzelle Overnight Stakes – a five-furlong turf dash for 3-year-old fillies at Churchill Downs.

Trained by Wesley Ward, Abyssinian won her grass debut by 6 ¾ lengths at Gulfstream Park in February and enters the Mamzelle off a third-place finish against the boys in the Palisades Turf Sprint at Keeneland on April 4. Tyler Gaffalione has the mount.

SPRING MEET RACING RETURNS WITH TWILIGHT THURSDAYS, MOTHER’S DAY – After a spectacular opening week highlighted by the 145th runnings of the Kentucky Derby Presented by Woodford Reserve (Grade I) and Longines Kentucky Oaks (GI), the Churchill Downs Spring Meet resumes with a week highlighted by the first of its popular Twilight Thursday programs and Sunday’s celebration of Mother’s Day.

Twilight Thursday has all of the elements that have made the celebration a fan favorite during the past two years: live racing, $1 beer, food from many of Louisville’s most popular food trucks and live music. Admission gates open at 4 p.m. and the first of the Twilight Thursday’s eight races has a post time of 5 p.m.

Twilight Thursdays are scheduled each week through June 28.

FREE GENERAL ADMISSION FOR MOTHERS ON SUNDAY – In honor of Mother’s Day, Churchill Downs will offer free general admission access Sunday for all mothers who are present with their child regardless of age.

MEET LEADERS – Following a remarkable Kentucky Derby Weekend with four Grade I victories, Ricardo Santana Jr. had an 8-6 win lead over Gabriel Saez in the rider standings to begin Thursday’s eight-race program. James Graham, Corey Lanerie, Julien Leparoux and Irad Ortiz Jr. were tied for third with five wins each. … Hall of Fame trainer Steve Asmussen had an 8-4 win lead over Rusty Arnold in the trainer standings with Tom Amoss and Chad Brown tied for third with three victories a piece. … A quartet of owners were tied atop the standings with two victories: Calumet Farm, G. Watts Humphrey Jr., Klaravich Stables and Maggi Moss.

DOWN THE STRETCH – There is a $137,594 carryover in the 20-cent Single 6 Jackpot for Thursday’s program. The sequence begins in Race 3. … Oaklawn Park’s leading rider David Cohen began riding at Churchill Downs on Thursday. A winner of 1,427 career races, Cohen defeated Ricardo Santana Jr. in the Oaklawn rider standings 75-73 wins. … “Inside Churchill Downs” will air Fridays throughout the Spring Meet at 6 p.m. on ESPN 680/105.7. The weekly one-hour horse racing radio show is co-hosted by Churchill Downs Racetrack’s Darren Rogers and Kevin Kerstein, and delivers a wide-ranging list of interesting guests, from jockeys, trainers, owners to well-informed handicappers and other industry insiders. Those outside the Louisville radio market can listen live online at http://www.espnlouisville.com/ or via podcast on the station’s website or https://soundcloud.com/. 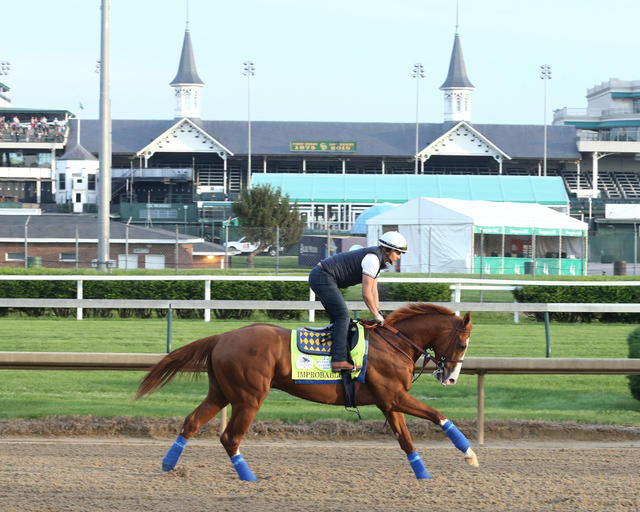