“This is a Kentucky Derby-type horse,” winning trainer Kenny McPeek said. “We may look at the (Nov. 6) Breeders’ Cup Juvenile but more than likely just wait for the (Nov. 28) Kentucky Jockey Club. The future is very bright for a horse like this.”

Purchased for $950,000 at Fasig-Tipton’s 2019 Saratoga Sale, King Fury is the first foal out of six-time stakes winner and 2016 Humana Distaff (Grade I) hero Taris.

Breaking from post No. 4 in the field of six juveniles, King Fury rated just behind Franz Josef and Super Stock as the leader rattled off comfortable early quarter-mile clips of :24.60, :49.51 and 1:14.34. King Fury circled three-wide around the final turn as Super Stock took over leaving the final turn. The chestnut colt with a big white blaze found his best running in deep stretch and held off Super Stock as the two battled on determinedly to the wire. A half-length separated the top two at the finish and it was another 3 ¾ lengths back to third-place finisher Oncoming Train.

Arabian Prince finished fourth and was followed by Franz Josef and Crime Spree. Eucharist was scratched.

King Fury, bred in Kentucky by Heider Family Stables, broke his maiden by 2 ¾ lengths in his career debut on Sept. 3 at Churchill Downs, but subsequently finished eighth one month later after racing four-wide throughout in the $400,000 Breeders’ Futurity (GI) at Keeneland.

“His last race at Keeneland was pretty puzzling because we thought he’d run a lot better than he did,” McPeek said. “I think the track ended up being pretty forward that day and his trip didn’t really help things.”

Should McPeek bypass the Breeders’ Cup Juvenile which comes 12 days after the Street Sense, King Fury could vie for favoritism in the $200,000 Kentucky Jockey Club (GII), a 1 1/16-mile race for 2-year-olds at Churchill Downs on Saturday, Nov. 28. The Kentucky Jockey Club is part of the “Road to the Kentucky Derby” point series that will determine the field of 20 horses that will compete in the Kentucky Derby Presented by Woodford Reserve (GI) at Churchill Downs on Saturday, May 1.

Each of Sunday’s races was for 2-year-olds, and Sunday marked the first time spectators watched live racing at Churchill Downs since Dec. 1, 2019, owing to the COVID-19 pandemic. A limited attendance of 1,534 was on-hand with proper social distancing as Churchill Downs followed the COVID-19 health and safety protocols for Venues and Events as mandated by the Commonwealth of Kentucky. Racing continues every Wednesday-Sunday at 1 p.m. ET through Sunday, Nov. 29. 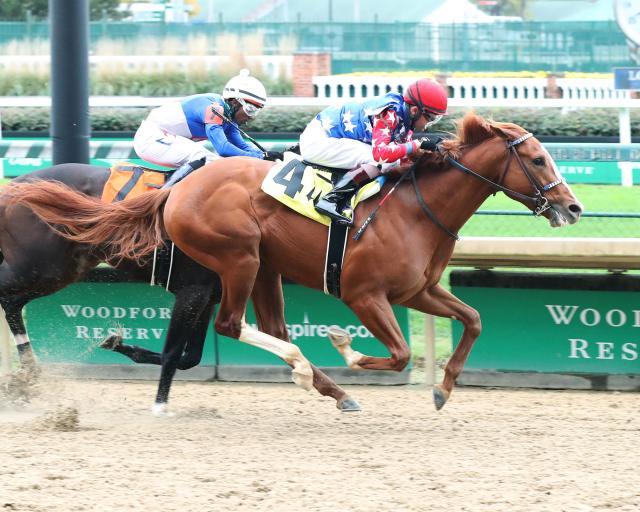