With regular jockey Florent Geroux aboard, Monomoy Girl worked alongside stablemate and Monmouth Oaks (GIII) runner-up Sassy Sienna through splits of :13, :26, :37 and :49.20, according to Cox’s watch. Monomoy Girl is scheduled to ship to Parx Racing in Bensalem, Pa. on Wednesday to run in the $1 million Cotillion (GI) on Saturday.

“She’s coming off a bit of a layoff from the (July 22) Coaching Club American Oaks (GI),” Cox said. “I’m not too concerned with the break, though. She’s worked every week and galloped strongly every day. Today’s breeze she broke off nicely and galloped out well. It was a strong work. Over the last couple of weeks, you could tell her gallops have gotten more aggressive and that she’s sharp.”

A 3-year-old daughter of Tapizar, Monomoy Girl has only one blemish in her stellar nine-race career – a runner-up effort as a 2-year-old in the Golden Rod (GII) at Churchill Downs.

“She’s been really good to us all summer,” Geroux said. “She’s ready to go for the Cotillion. I’m very happy with her preparation and she acts like she’s maturing and getting better. She’s very classy.”

“We’ve faced a lot of these contenders before and we’ll probably have to face them again in November for the Breeders’ Cup,” Cox said. “She still has to perform to her top level, even though she’s beaten them before. Just like Monomoy is doing, these horses could be getting better as time goes on.”

The Breeders’ Cup will be held at Churchill Downs for a ninth time on Friday Nov. 2 and Saturday, Nov. 3. For more information, visit www.BreedersCup.com.

“That was something special yesterday,” trainer Kenny McPeek’s assistant Greg Geier said. “I’m not too sure if Kenny will run him again or wait for the Breeders’ Cup Juvenile. He’s been pretty busy at the (Keeneland September) sale this week so we’ll catch up and see what the plan is in the next couple of days. We’re just very pleased with his effort and he was full of himself after the race and this morning. He’s maturing and getting smarter. We’re excited Breeders’ Cup is right here at Churchill. We don’t have to go very far for the race.”

Cairo Cat raced near the rear of the Iroquois filed early on and moved into contention from the inside down the backstretch. Patiently handled by jockey Brian Hernandez Jr., Cairo Cat waiting for an opening at the top of the stretch, found room and then switched to outside of favored Tight Ten inside the final furlong to edge clear in the final stages.

By winning the Iroquois, Cairo Cat’s $60,000 entry fees will be paid by Breeders’ Cup Ltd. and his connections will receive a travel stipend.

Cairo Cat’s earnings total $133,750. Previously, he broke his maiden at 18-1 in an off-the-turf, seven-furlong maiden special weight at Saratoga on Aug. 11.

The 2-year-old son of Cairo Cat also garnered 10 points on the ‘Road to the Kentucky Derby’ with his victory in the Iroquois. Tight Ten, Pole Setter and Tobacco Road earned 4-2-1 points for their second, third and fourth-place finishes, respectively.

“She’s doing great after the race,” trainer Tom Amoss said. “We’re just absolutely thrilled with how she ran and very excited for the Breeders’ Cup. I would venture to guess her next race will be right here in the Breeders’ Cup. Just as we’ve done the entire time, Joel and I will get together in the next day or so to talk things over and come up with a plan.”

Ridden by Corey Lanerie, Serengeti Empress broke alertly from the rail and ran 1 1/16 miles on a fast track in 1:45.47 to easily dismiss her 10 rivals. She set solid early quarter-mile fractions of :23.17, :46.94 and 1:12.20 along the way. Southern California invader Splashy Kisses was a distant second with Lightscameraaction another 1 ½ lengths back in third and My Wynter Rose another head back in fourth

“This is a thrill of a lifetime,” Politti said. “To have my family and friends here at Churchill Downs is very special.”

The victory by Serengeti Empress was a record for the Pocahontas and largest winning margin in a stakes race at Churchill Downs since Rachel Alexandra won the 2009 Kentucky Oaks by 20 ¼ lengths.

Serengeti Empress, a Kentucky-bred daughter of Alternation out of the Bernardini mare Havisham, banked $116,560 for the win.

Serengeti Empress also is the early points-leader on the Road to the Kentucky Oaks after collecting 10 points. The Pocahontas was the first of 30 qualifying races to the Longines Kentucky Oaks (GI) to be run next May, and points were awarded to the Top 4 finishers on a 10-4-2-1 scale.

Entries for Saturday’s card will be taken Wednesday. To view the full list of nominations for the Dogwood, visit: https://bit.ly/2NfTx5v.

DOWN THE STRETCH – On Sunday there is a two-day carryover of $10,842 in the 20-cent Single Six Jackpot (Race 5, 2:45 p.m.) and a $3,953 carryover in the $1 Super Hi 5 (Race 10, 5:26 p.m.). … The September Meet will continue on a Thursday-Sunday schedule for the remaining two weeks of racing. Thursday will be the first Twilight Thursday of the meet with a first post of 5 p.m. Fans will enjoy $1 beer, local food truck faire from Flavaville, Mark’s Feed Store, Red Top Gourmet Hot Dogs and Zoom Zoom Yum, live music courtesy of the Sheryl Rouse Band and lawn games. 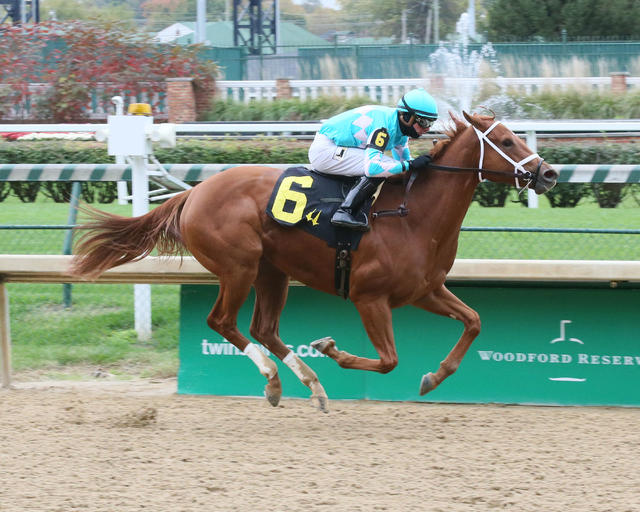