Kitodan, the longest shot in the field of 11 3-year-olds at odds of 40-1, went from claim to fame with a narrow head victory over Smokin’T in Saturday’s third running of the $200,000 Audubon Stakes for 3-year-olds at Churchill Downs.

“We claimed him for $80,000 and just wanted to try and win a race,” Foster said. “This race came up and thought we’d give him a shot. What an absolute thrill for our team and these guys behind me. This is so amazing. Gerardo rode a phenomenal race and gave it everything he had and Kitodan responded. What an amazing feeling.”

Breaking from post five, Kitodan settled near the back of the pack as Summer Anthem set the pace through fractions of :23.22, :48.32 and 1:13.94. Both Smokin’T and Kitodan commenced their moves around the final turn and emerged into the stretch as the two clear leaders. Kitodan, on the far outside, battled with Smokin’T shoulder-to-shoulder and emerged as the slim winner.

Kitodan, a son of Point of Entry out of the A.P. Indy mare Divine Presence, was bred in Kentucky by Flaxman Holdings Limited.

The Audubon, named after the nearby Louisville neighborhood, serves as a prelude to the $200,000 American Derby (Listed) for 3-year-olds at 1 1/16 miles on turf on Saturday, July 2. 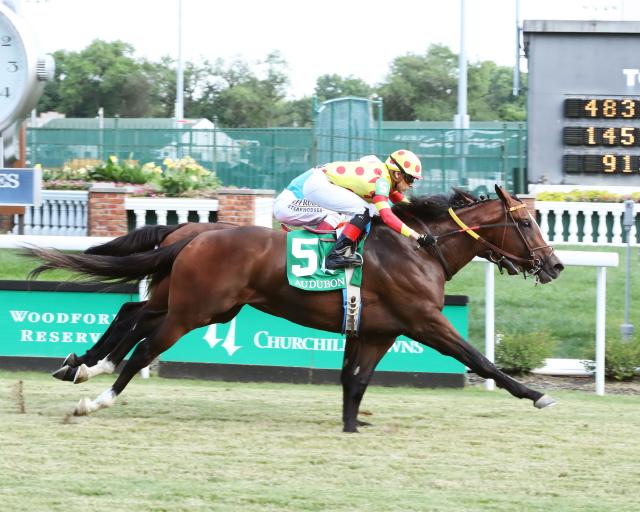