“This was a very good race for him,” said trainer Fausto Gutierrez, who flew in from his native Mexico to watch Kukulkan’s race. “With the (Stephen Foster) right here, we may look at that race for his next start. I’m just enjoying this one for right now.”

Ridden by Brian Hernandez Jr., Kukulkan closed from about five lengths off the early pace at odds of 11-1 to best a field of nine rivals in a final time of 1:43.84.

The 4-year-old son of Point Determined is based at Keeneland with trainer Ignacio Correas IV.

“I went to Keeneland to breeze him (before Friday’s race),” Hernandez said. “I really didn’t know what to expect. You look at his past performances and you see so many wins. He got me excited when we breezed because he can really run.”

Kukulkan’s only blemish in his past performances is an 11th-place finish in the Pegasus World Cup (GI). The multiple Grade I winner in Mexico came to the U.S. to compete in Gulfstream Park’s Caribbean Classic Stakes on Dec. 8 where he dominated the competition by 10 ¼ lengths.

Nominations for the Stephen Foster – a “Win and You’re In” race for the Breeders’ Cup Classic (GI) – close Saturday, June 1. Other horses targeting the race include Alkhaatam, Quip, Seeking the Soul and Yoshida (JPN). Trainer Steve Asmussen reported Friday that Combatant and Tenfold would both be nominated for the Stephen Foster but has not determined if they will run.

Owned by Bradley Thoroughbreds, Whispering Oaks Farm, Team Hanley, Madaket Stables, Tim Cambron and Anna Cambron, She’s a Julie rallied from just off the early pace to score a half-length victory in the 1 1/16-mile La Troienne under Ricardo Santana Jr. The victory marked her sixth win in 13 tries and boosted her earnings to $878,130.

“She’s always been a very special horse to us,” Asmussen said. “She’s named after my wife so it was a little extra special to get the victory in the La Troienne.”

The 4-year-old daughter of Elusive Quality has not finished worse than fourth since uniting with Asmussen’s go-to rider Santana eight starts ago.

“(Santana) is very much like me, we both really like to win,” Asmussen said. “He sometimes takes losing harder on himself than anything. He’s very aggressive and expects to win every time he goes out there. That’s all we can ever ask as trainers.”

She’s a Julie is scheduled to breeze Sunday or Monday at Churchill Downs.

The 1 1/8-mile Fleur de Lis is a “Win and You’re In” event for the Longines Breeders’ Cup Distaff (GI) on Nov. 2. Nominations for the Fleur de Lis close June 1.

WORK TAB – Saturday morning’s work tab at Churchill Downs featured Longines Kentucky Oaks (GI) winner Serengeti Empress, who breezed an easy half-mile in :49.40 at 6:45 a.m. Trained by Tom Amoss, Serengeti Empress worked through opening fractions of :12.60 and :25 before galloping out five furlongs in 1:02.20 and six furlongs in 1:15.60, according to Churchill Downs’ clocker John Nichols. Serengeti Empress is targeting the June 8 Acorn (GI) at Belmont Park. … One of the likely rivals to Serengeti Empress in the Acorn is Eight Belles (GII) runner-up Bell’s the One, who worked a bullet five furlongs in 1:00 for trainer Neil Pessin. … Pat Day Mile (GIII) third-place finisher Dream Maker worked a half-mile in :48.80. The son of Tapit could run next in the $150,000 Matt Winn (GIII) on June 15, according to assistant trainer Allen Hardy.

DOWN THE STRETCH – The 20-cent Single 6 Jackpot was hit Friday for a substantial $355,780. The jackpot will start from scratch in Race 6 Saturday. … Hall of Fame trainer Bill Mott’s assistant Kenny McCarthy reported “all is well” with Kentucky Derby winner Country House, who trained at 6:45 a.m. Saturday. The colt’s next race plans remain in flux. … Sunday’s nine-race card at Churchill Downs features a trio of allowance/optional claiming races and a pair of maiden special weights. Each of the aforementioned has a full field. First post is 12:45 p.m. EDT. … Jockey Florent Geroux will be at Santa Anita on Monday to ride in a trio of Grade I events Monday: Core Beliefs in the Gold Cup at Santa Anita, Bolo in the Shoemaker Mile and Meal Ticket in the Gamely. … In celebration of Memorial Day on Monday, all active and retired members of the United States armed forces will be admitted free of charge or a discounted $29 day at the races in Millionaires Row. Also, Churchill Downs’ bugler Steve Buttleman will perform patriotic melodies following the “Call to the Post” for each race. … The podcast of “Inside Churchill Downs” that aired Friday on ESPN 680/105.7 is available at www.churchilldowns.com/insidechurchilldowns. The one-hour program featured trainer Mark Casse’s chief assistant David Carroll along with trainers Rusty Arnold and Steve Asmussen. 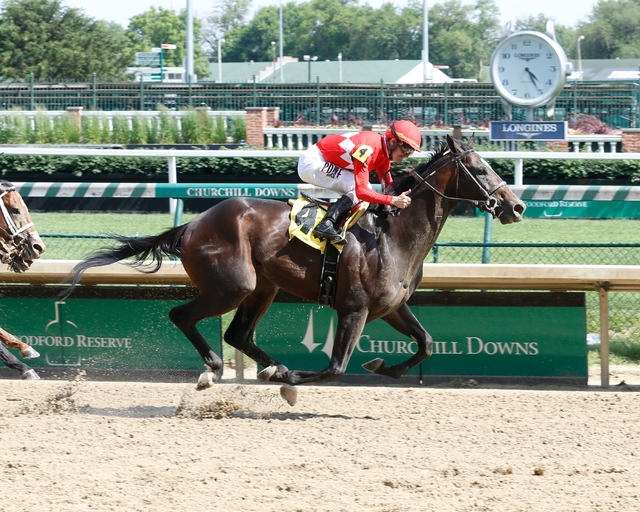